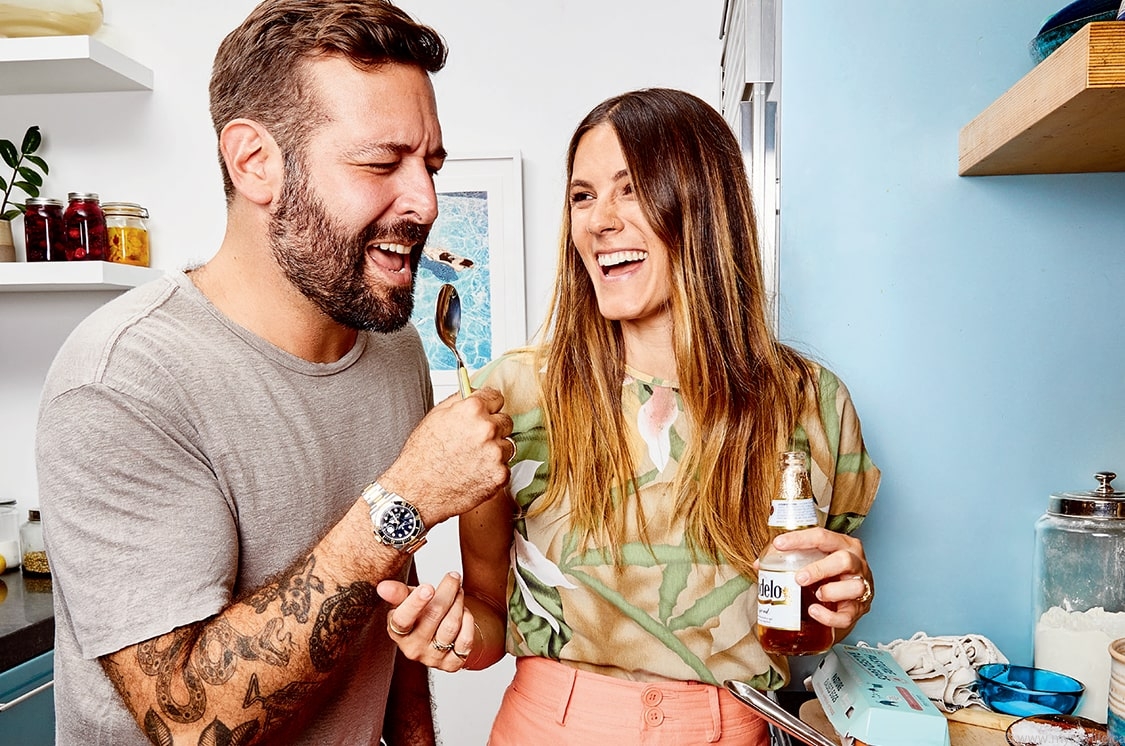 From hosting and producing cooking shows and running a restaurant to publishing a cookbook, it’s all about the food for Eden Grinshpan. With Top Chef Canada season 9 airing this spring, Grinshpan dishes about everything in her life now.

You never forget those “pinch me” moments in life, such as when you’re told that the job — hosting the most prestigious culinary competition in the country — is yours. And, even after five years of hosting Top Chef Canada, Eden Grinshpan is still in awe. “Obviously, my mind is blown,” she says. “But, when you hear the successful, knowledgeable judges tell the contestants that this is world class, and that it’s blowing their minds, too, you can’t help feeling like you’re part of something really special.” To be able to taste food from the different terroirs of the country, using all of the different ingredients grown in Canadian soil, and to see how all the different cultures across the country influence the cuisine is all tremendously inspiring for Grinshpan.

Keeping a show fresh for nine seasons is no small feat. How do they do it? “Every season, chefs from all over the country bring some of their best dishes to the table, and it’s amazing because everyone has their own journey, and we get to witness it,” she says. “This one is a special season because everyone, especially in the restaurant industry, is so challenged right now, everyone was just so excited to go there to contribute, and you could really feel the energy.” Add to that, the producers had to get super-creative this season with coronavirus restrictions, and they did an outstanding job, she says.

Grinshpan isn’t just a TV host, either; she has the chops to back herself up. She grew up in Toronto, then moved to New York after studying at Le Cordon Bleu in London. After a whirlwind romance, which ended up with her getting married to Ido, she co-created two cooking shows, Eden Eats and Log On and Eat with Eden Grinshpan, travelling the country looking for the most adventurous bloggers and social media influencers.

When you work in TV, there’s a lot of time in between filming, which gives you an opportunity to dabble in different projects, she says. So, about seven years ago, she decided she wanted to get back in the kitchen, partnering with Samantha Wasser to open Dez with Esquared Hospitality group: it was a casual, contemporary restaurant featuring Middle Eastern food.

“Don’t ever be ashamed to ask for help — and I think once you let go of that, it kind of gives you a sense of calmness and relief”

The restaurant shut down, but if you’re Grinshpan, you don’t stand still. You forge ahead, and she did, carving out another project and releasing her first cookbook, Eating Out Loud (Clarkson Potter/Penguin Random House, 2020). “The restaurant, my travels, my Israeli background and also growing up in Toronto, one of the most multicultural cities in the world, really inspired the book,” she says.

Filled with mouth-watering photographs, the cookbook is full of recipes that are not only delicious, but also accessible, and that was important to Grinshpan. “It’s not super-traditional or authentic, it’s very much my own contemporary approach,” she says, adding that the cookbook is a reflection of the way she personally eats, and that taste, texture and flavour combinations are paramount. “I’m inspired by the season and what I see at the grocery store,” she says. She happens to eat a lot of vegetables and that’s why “the biggest chapter in the book is making vegetables — Middle Eastern and Mediterranean food just lend themselves to that kind of a diet.”

If you’re scrolling through Grinshpan’s Instagram pics, you’ll fall in love with all the fun bits and pieces of her life that she shares, from dancing around her home to yoga poses to posing topless covered in pizza when she was pregnant with her now three-year-old daughter, Ayv. And now she’s pregnant again, but she has no issue with saying that she has a lot of help.

“I can’t do it all by myself, and I’m the first to say that it takes a village,” she says honestly. “Sometimes, when we’re on set, it’s 16-hour days.” In fact, that was one of the reasons they decided to move back to Toronto, so that her parents could help out. Her tip? “Don’t ever be ashamed to ask for help — and I think once you let go of that, it kind of gives you a sense of calmness and relief,” she says. “Once I asked for help, I got better at being a mom and better at doing my job,” she adds.

What’s coming down the pipeline for Grinshpan? “I love what I’m doing right now, getting to take part in a lot of really creative projects,” she says. She feels so fortunate that she gets to be a part of Top Chef Canada every year, and that is something she hopes will continue. She enjoyed the creative process of putting her book together, so hopefully another one is in her future. But that’s not all. “There are so many different projects in my head, and I’m slowly working my way toward them, hoping they’ll happen eventually.”

Editor’s note: We have no doubt.

Almost every restaurant in Israel has a version of this whole-roasted eggplant, so it only made sense to have my own. Serving eggplants whole, stem and all, makes for such a special dish because people can see the vegetable in its beautiful original (or original-ish) form. It’s also the perfect blank canvas for a variety of flavours and textures. Sometimes I’m in the mood for a drizzle of pomegranate molasses and yogurt, while other times I add crushed ripe tomato for its bright acidity, balanced with nutty tahini and earthy za’atar. You’re going to want a whole loaf of bread or challah for this one.

1. With the tip of your knife, pierce each eggplant in two places — it doesn’t need to be perfect or in the same place every time; this is just so the eggplant doesn’t explode on you.

2. Pick a cooking method for the eggplant: grill, broiler, or stovetop burners. The bottom line is that you want this eggplant to be almost unrecognizably charred. It’s going to deflate and the skin will get white in some places, but that just means the fire is working its magic on that eggplant.

OPTION 1: Grill Preheat the grill until hot. Add the eggplants and let the fire do its thing, making sure to keep turning the eggplants so they char all over. You want them to get black and maybe even white in some places, 20 to 30 minutes total.

OPTION 2: Broil Preheat the broiler. Put the eggplants in a broiler-proof roasting pan and place the pan as close to the heating element as possible. (You may have to adjust your oven rack to accommodate the depth of the pan and eggplants.) Broil until they are evenly charred all over, 35 to 40 minutes, checking and turning the eggplants periodically. You want the eggplants to keep their shape but get really charred and wilted.

OPTION 3: Stovetop Gas Burners Line your stovetop around your burners with foil. Working with one at a time, place the eggplant over a medium flame and let it char, making sure to turn it every 5 minutes. Continue cooking until it is deflated and black all over, about 15 minutes.

3. Transfer the cooked eggplants to a colander in the sink and let the juices run. (The juices can make the dish taste bitter.) Once they’re cool enough to handle, and being careful to maintain the original shape, remove all of the eggplant skin except for the stem. (Feel free to reserve the skin to make Charred Tahini) Set aside on a large platter.

4. In a blender or food processor, blend together the tomato with the kosher salt. Set aside.

5. In a small bowl, mix together the za’atar and olive oil. Set aside.

6. Gently press on the eggplant flesh with a fork to spread it out. Drizzle the eggplants with the garlicky tahini and spoon over the pureed tomato. Drizzle with the za’atar oil and some red zhug (if using). Garnish with the basil and mint and finish with a drizzle of olive oil and a sprinkle of sea salt. Serve warm with fresh bread.

Excerpted from Eating Out Loud: Bold Middle Eastern Flavors for All Day, Every Day by Eden Grinshpan with Rachel Holtzman. Copyright © 2020 Eden Grinshpan and Rachel Holtzman. Photographs © 2020 Aubrie Pick. Published by Penguin Canada, a division of Penguin Random House Canada Limited. Reproduced by arrangement with the publisher. All rights reserved. 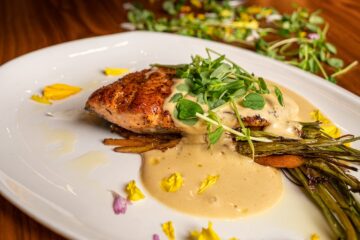 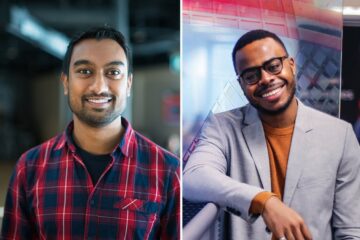