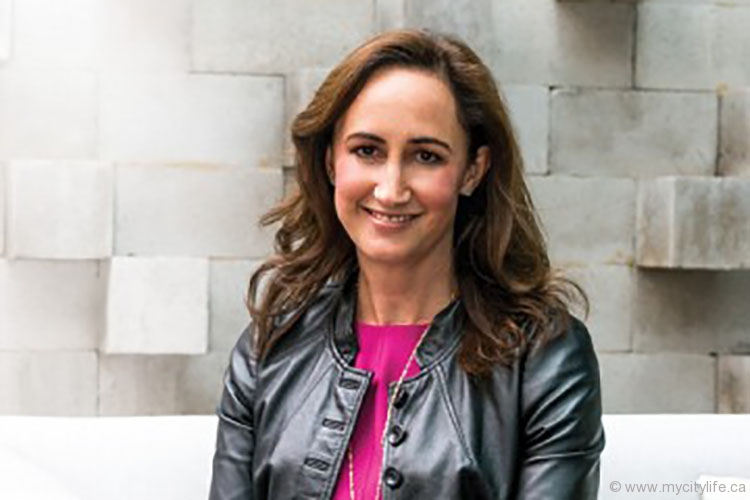 An inside look into the working mind of plucky Sophie Kinsella

The British charm of Sophie Kinsella is as bright as the hot pink sheath she wears as we sit across from each other in the bar area of the Ritz-Carlton Hotel in Toronto. The former financial journalist-turned New York Times bestselling author, who shot to literary fame with her Shopaholic series, has over the years garnered a loyal and global following as well as some censure for her work as a quintessential chick-lit writer. We caught up with the quick-witted Brit on her recent book tour in Toronto to talk about Shopaholic to the Stars, her latest and seventh title in the bestselling series, the balancing act of a working mother of five, and her beloved scatterbrained anti-heroine, Becky Bloomwood.

On the release of Shopaholic to the Stars four years after her last installment
It was really about which story I wanted to tell first. Because in that interim period I published I’ve Got Your Number, which is a standalone piece, and Wedding Night, which is another standalone. So I was releasing books but they just weren’t Shopaholic books. For me, it’s always this sort of toss-up of what I’m going to write and when. And I really just write the story that’s bursting to be told. So, you know, I loved writing Mini Shopaholic, and I finished it with the promise of Hollywood, so it was already leading that way, but I was dying to write I’ve Got Your Number — I just couldn’t wait. And so, you know, I had to kind of say I’m going to do this and this. And it’s quite nice to take a break from Becky, actually, love her though I do; she slightly does my head in. And also, there’s something very different when writing a series; so much has already been predetermined compared to starting with a blank sheet of paper, two characters, a new romance and different issues — that freedom.

On the growth of fashion-obsessed Becky
I think I felt like Becky was on a different path than she’s been in any of the previous books because her obsession is not just shopping, it kind of turns into celebrity as this is a new thing for her. It’s an easy obsession to get these days, especially if you’re connected to Hollywood or find yourself in that world. What I’ve realized is that there is kind of a price to pay for being a celebrity, and that’s the kind of journey that Becky goes through. I just want to write books that people find relevant.

On the meaning behind Becky’s sometimes featherheaded thoughts
I think Becky proves herself on many levels, you know, she’s always finding solutions to problems and helping people out and I think she’s allowed the odd silly line. I mean these silly thoughts cross through my mind all the time, you know, it’s just a bit of randomness and ridiculousness.

On digging deep into social nuances, like the L.A. juice bar culture and North Americans who drink really cold water
I ask myself all the time, how do they do it? Don’t they get headaches? I just pick this stuff up everywhere I go. On every book tour, on every trip I make, I’m just registering interesting stuff, which then comes out in my books. You need to be receptive the whole time. And, of course, I do specific research when I need to, but I think a lot of the cultural stuff you pick up as you go around. When I went to L.A. I did feel that the whole filming experience was like one big research trip because it showed me the inside of Hollywood. You can go to L.A. and walk down the Walk of Stars and you can do all that — and I had done that — but I think it was only when I really worked on the film [Confessions of a Shopaholic], spent time on the set and saw the industry on the inside, I thought, OK, I’m going to write Shopaholic to the Stars. I had a few things to say about Hollywood and I could see the potential for Becky.

On childhood literary encouragement
My mother used to make up bedtime stories for us. Every night, night after night, she would invent characters and have long-running series, which we just took as normal; we thought, well, every mom does this. It was only after, when I compared notes, that I thought that was pretty amazing. I still remember some of the characters she invented. I mean, I think she should have been a writer herself.

On balancing her career as a mother of five
It’s a work in progress. It’s a bit of a blur. I just juggle like everybody does. I mean it’s like a job, and I just carve out time to write, just like you carve out time for any job. I mean, they do sort of spill into each other; I’ll be serving out supper and my head is not really with it, and then I’ll suddenly start scribbling something down, and one of my kids is talking to me. It’s a bit of give and take. They kind of know that I might suddenly dash off and write a paragraph, and they’re fine with that.

On how her readers have both a shallow end and a deep end
We’re all multifaceted, and I think it’s hard to categorize a person as one thing or something else. Most of us are on the spectrum in all these areas. So, we might be interested in politics, we might care for the environment, we might be very well read on a certain author, or you know, some science issue or whatever it might be, but at the same time, we can have a passion for false eyelashes, and why not? And I think everything is valid, there is not one that is not valid. And you know, what I found is that you talk to anybody and get beyond the image and you find that there are hidden depths. So you talk to some old crusty man at dinner and find out that he has a wicked sense of humour. Or you talk to someone who looks very dressed up and you might make assumptions about her but she’s really caring for an elderly relative and she’s a really great person. Everybody has different facets, and I learned that from talking to different people. Appearances are always deceiving.

On the best and worst part of her day
It depends on the day. In terms of writing, the best moment would be when an idea pops into my head and it’s something that I cannot control, I can’t decide, it just happens and I think (gasps) “Oh, is that a thing? Is that an idea, could that be good?” And there’s a real buzz if I get an idea that I think might really work. And the worst is when I get to chapter 10 of a book and I can’t see how to make the next scene work — I hate my plot, I hate my characters, I’m thinking, “Why did I start this stupid book in the first place?” And you know, there’s always a grind with any book.

On the benefit of starting from scratch
As soon as I realize there’s a problem I have to fix it. I have friends who will persevere with a draft and get to the end, all the while knowing that they have to make a dramatic change, like kill off a character or something, and I can’t do that. The minute I know something doesn’t work, I have to go back, fix it, and I tend to write a chunk, take a few days off, get perspective, then read it and edit it and see if it’s working and sort of build blocks of the story. And like I say, the minute I know something is wrong, I have to deal with it.

On writing well past her golden years
Authors like Mary Wesley and Joanna Trollope are such an inspiration. I also have several friends who are writing, you know, well past the normal retirement age, and I think well, all power to them. Why should you stop, and you know, with any luck, as you get older, you acquire more wisdom and you have more things to say.