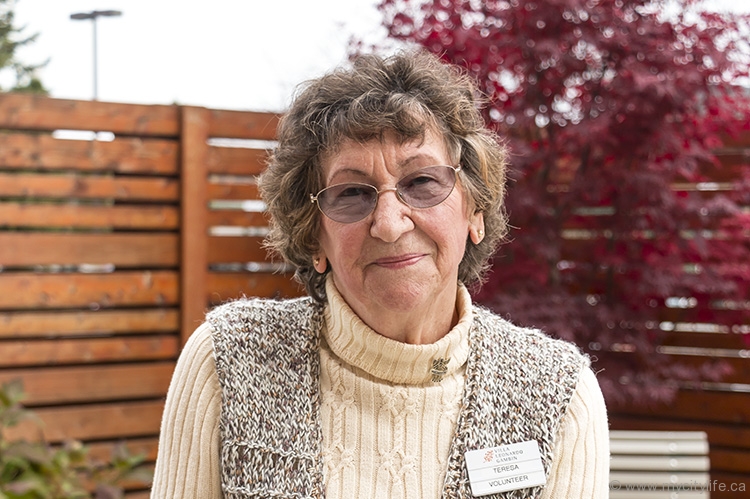 Homelessness, hunger and loneliness — these are but a few of words to describe the dire situations many individuals and families in our community struggle with each year. And with the holiday season upon us, it’s easy to see why giving back, whether financially or through one’s time, pops up in our minds. But are the majority of us acting on these thoughts as we tear open yet another gift? The compassionate individuals below prove that being a volunteer is not just a seasonal pastime — it’s a calling and a community effort, and a way to give back to those in need all year long

Since 2004, Teresa Tesan has volunteered her time at Villa Leonardo Gambin, her various roles and presence on the 4th and 7th floors of the charity lifting the spirits of its residents. Teresa celebrates 10 years at the long-term care residence this year. She is 86.

How did you get started as a volunteer?
I was a widow and wanted to do something for people instead of sitting at home. That’s why I started coming to Villa Leonardo Gambin twice a week 10 years ago, and I’m still in the same routine, really.

What are some of your responsibilities?
I try to come early to help people in the dining room, and then after that I help around and usually sit in the TV room with our members. Some days we crochet, some days we talk about life; they ask questions and mostly I listen all the time. They look really happy when they see me. I hope I really help them. I like the people, and the atmosphere here is very happy.

Where do you think you first recognized the need to give back?
When I was young I wanted to be a nurse, but it was impossible because I was the only girl in the family. My mother was very sick and I was up and down the hospital with her; maybe that’s where I got something in mind to give back to somebody else, so that’s why I’m here.

Would you recommend that others volunteer?
Yes. I know so many people who are sitting at home with nothing to do; they are bored, so I always say:
Why don’t you find something to get you out of the house and help the
community? It’s better than sitting at home. As long as I can drive, I’ll
continue volunteering.
www.villagambin.com

After retiring from a career in health services, Anne Chery, 63, followed in her family’s altruistic footsteps by volunteering her time in the donations room at Blue Door Shelters, a safe haven for women, men and children who are homeless or are at risk of losing their homes. As the only family shelter in York Region, Blue Door had to turn away 5,845 individuals last year due to a lack of available beds, says United Way York Region.

What motivated you to become a volunteer?
I grew up in a family where it was just done. Everybody — my mom, my dad — they were always doing something. When I was busy working, I gave money, mostly — that was how I did my donating and giving back to society. When I was retired I had more time and so I decided to do something.
I was looking for something that was not mainstream because I think the big charities get a lot more volunteers. I was also looking for something close to home — I live in Holland Landing, so I’m about five minutes away from Blue Door Shelters. I had brought things there before and I happened to see an ad saying they were looking for a donations volunteer so I thought, I should go for that.

What was it about Blue Door Shelters that spoke to you?
It’s a charity that’s doing really good work but doesn’t get a lot of publicity. I’ve always had a soft spot for the less fortunate. When I used to work in Toronto, I would walk from Union Station up to the hospital. I can still remember giving money to a homeless woman and one guy stopping me to say, “Why do you do that, she’s just going to buy beer,” and I said, “Oh, I’m sorry, I thought she was going to put it in her RSP!” I remember thinking, how could you be so mean-hearted? Anybody could be in that position if they had bad luck. And that’s how I see it, and so, if something happens in your life and you don’t have a backup, and you need help, there should be people there to help. I feel lucky because I’ve had so much and I haven’t been in those situations and I want to help people who are.

What have you given up from your personal schedule to volunteer?
I don’t sacrifice anything in particular except my time. And I have time. I mark my calendar; every Thursday afternoon I go to Blue Door. That’s what I do, and I’ve done it for three years.
www.bluedoorshelters.ca

For 25 years, Vaughan resident Peter Wixson has made volunteering his life. The 75-year-old is the executive director of the Vaughan Food Bank, which provides millions of meals to hundreds of needy families in Vaughan and to York Region agencies each year. It’s not unusual for him and his team of hardworking volunteers to individually clock in up to 60 hours of unpaid work each week, especially during the holiday season. In 2011, Peter received the City’s Ward 2 Civic Hero Award for his volunteer efforts.

What’s the most touching moment you’ve experienced while being a volunteer?
Ten years ago I happened to confront a man suffering from alcohol and substance abuse. He was sleeping over in the Claireville Conservation Area in a little pup tent. I went out and bought him some Tim Hortons cards to keep his breakfast and supper
going, to keep him alive. At that time he was just a piece of stick; he was so thin. He quit drinking and drugs that day. A few years later, I saw him at Fortinos and didn’t recognize him. He said, “Do you remember me? You gave me a bunch of Tim Hortons cards.” And I said, “No, you don’t even look like that individual.” And he responded that he’s back to being a human being. He’s now an international figure with a business and buys the Vaughan Food Bank 250 turkeys, 50 chickens, 50 hams and so forth, every year. It’s people like this that make our facility go on.

How much of your time do you donate?
In the summertime things are a little bit slacker, but hunger never takes a holiday; it still keeps going through and you still have to be prepared to work on it. Now we’re working until 6 or 7 at night and on the weekends, but come wintertime, we’ll be here until 8 p.m. or 10 p.m. Everyone that comes here is screened, and if they require food, they get 28-days worth of food every 28 days. For me, the greatest thing in my life would be to come in here one day and say we don’t need any more food. But it’ll never happen; the reality is that the need will continue to grow.

Who visits the Vaughan Food Bank?
On a monthly basis, we serve 1,000 clients. We have young families, and a lot of families where the husband and the wife both lose their jobs. There’s an awful lot of seniors we’re looking after now. Out of our own food bank, we supply three quarters of a million meals per year, but when you add up the numerous agencies we assist, such as Yellow Brick House and Children’s Aid, we’re talking about 1.2 million meals a year. Whatever we have, whatever we’re doing, it works.

Why is it important to have volunteers in our city?
It helps the whole community get together and work as a team. There are always needy people of one sort or another. It could be your neighbour, it could be your family — it could be anybody. There are rich people and
there are poor people. But in York Region, and also in Vaughan, which is the worst, you’d be surprised how many people here just go week to week or day to day. I’m not kidding. I have five new people registering this morning. But if you’re going to volunteer, it shouldn’t be forced. Those who are interested in giving back on a consistent basis are those who will make their mark in life later on.
www.vaughanfoodbank.ca

A former psychometrist, Joanne Rudolph, 57, began her volunteer work three years ago at Reena, a non-profit social service agency dedicated to individuals with developmental disabilities. She received the City of Vaughan Volunteer Recognition Award last year for her efforts in Reena’s Pathway program, where she assists young adults with grocery shopping and cooking.

What motivated you to become a volunteer?
I liked the feeling of being involved,
of giving back. I guess it’s just a part of who I am and the way I was brought up: to be present, to make a difference, to do something. Something would be missing if I didn’t. I like the interaction I guess, and I missed that personal contact. I don’t know; it’s an interesting question. It was just something I knew I wanted to do; it was like not doing it wouldn’t make sense to me.

What do you love most about being a volunteer at Reena?
Well, being involved, to give back, to make some sort of contribution, to leave that day and say, did I make a difference today? It’s just from simple smiles and hellos with clients, talking to them, helping them solve a cooking challenge. I help out with whatever they need me to do, whether that’s filing or grocery shopping with the young adults, academic programming, or just being present with them. And when I leave, I get the smiles. It was very humbling to receive the City of Vaughan Volunteer Recognition Award last year, because when you do these things it’s not about you.

What kind of impact do you hope you’re making?
Well there are many levels to look at that. From a personal level, I’m hoping to set a good example for my daughters by keeping the tradition alive; my mother was really involved in organizations as well. My daughters have now taken it in and it’s part of their values as well. As for the agency, I hope having another adult present with the clients helps make a contribution to the program. I hope I’m making an impact by being positive and present in a very upbeat and engaging way.
www.reena.org 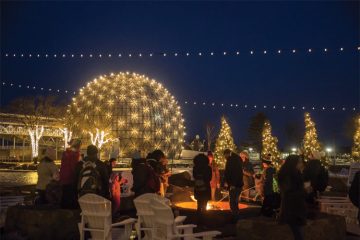 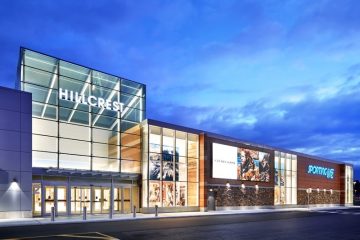 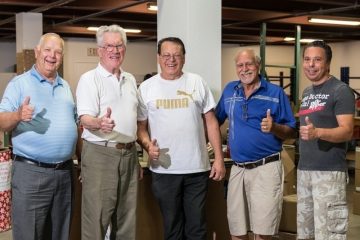 The Vaughan Food Bank: The Heart and Soul of a Caring Community 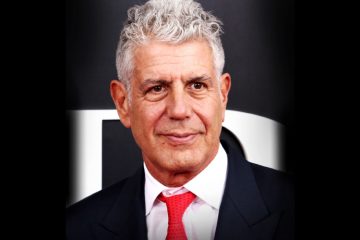