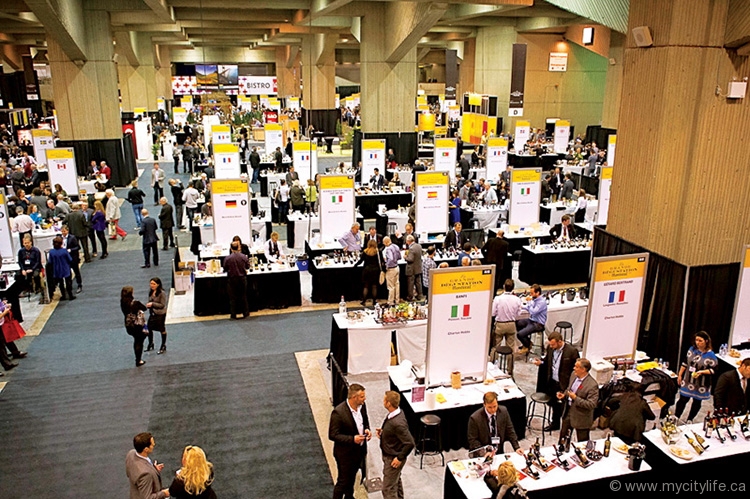 A weekend of world-class wines in Ottawa and Montreal

“South Africa makes wine?” The look of disbelief on the face of the woman next to me is as easy to decipher as her Parisian accent. “Wow, this is actually good. Délicieux.” Though strangers, we are standing together in the middle of a clamorous exhibition hall in the heart of downtown Montreal for La Grande Dégustation, musing over samples from Mulderbosch Vineyards. “It’s Chenin Blanc,” I say, drawing upon my knowledge from various wine certifications. “And it can compete with the best whites out there.” I look around the hall to the booths of New Zealand, U.S., Germany, Chile, Greece and countless other countries and realize that Canada is quite good at bringing people together with food and wine. There I am: a Torontonian in Montreal tasting a South African wine with a stranger from France, the milieu attesting to our country’s diverse and bountiful food and wine scene.

The months of October and November are typically busy months for food and wine shows in Ontario and Quebec, drawing in hundreds of exhibitors and thousands of event-goers from around the world. Being certified by the Wine and Spirits Education Trust, and currently working toward my specialist of wine certification through the U.S.-based Society of Wine Educators, I decide to take on two premier events during the second weekend of November — La Grande Dégustation de Montreal, as well as the Ottawa Wine & Food Festival — to explore international offerings.

My journey begins in Ottawa after riding the escalator to the tasting floor of the 29th Ottawa Wine & Food Festival at the Ottawa Convention Centre. With over 1,400 samples of wines, beers, spirits and foods from around the globe, there are many new tastes, products and people to discover, and it’s hard to find footing in the maze of food and wine exhibitor booths. So I follow the parade of men and women leading the way with tasting glasses in hand.

An exhibit with a backdrop of Canadian flags catches my eye, so I stop by a booth to look at two featured bottles: a bottle of white labelled “1914 – Honour” and a red labelled “1914 – Valour.” Peter Toms, brand marketing manager of Diamond Estates, tells me the story behind the bottles. “These wines are a nod to the 100 years that have passed since Canada’s involvement with World War I,” he says, a glint of solemnity in his eyes. Pouring me a sample, he explains that Honour and Valour capture the essence of Canadian heritage: “These are beautiful wines, very easy to drink; they pair well with most foods, and their names represent what it means to be Canadian.” The white — a blend of Chardonnay, Riesling and Gewürztraminer — exhibits crisp acidity and predominant citrus and floral notes. The red — Merlot-dominant with mostly Syrah and Gamay to round out the varietal composition — is medium-bodied and fruit forward. Both are pleasant, but the white stands out for its perfumed nose. “A red and a white,” I say, looking to the Canadian flag behind Toms. “Will there be a rosé?” We laugh before I find my way to the main tasting area.

Half an hour later, I enter a wine-tasting seminar room for the Gold Medal Tasting event. The seminar showcased eight of the Gold Medal winners from the Ottawa Wine Competition, an event held in October that selected outstanding wines in a series of blind tastings among wine professionals in Ontario and Quebec. Led by the co-head judges of the competition, Janet Dorozynski and Rod Phillips, the seminar takes its 25 participants through a tasting of a sparkling white, a sparkling rosé, two Cabernet Francs, a Riesling, a Cabernet Sauvignon, an ice cider and an ice wine. With the exception of the sparkling rosé from Oyster Bay in New Zealand, all other picks are from Canada. The Cottage Block Riesling, 2012, from Strewn Winery in Niagara, is a standout, emphasizing Niagara’s engagement with making outstanding Rieslings. The lady next to me quietly comments that she would never buy the Cottage Block Riesling, noting it’s far too dry for her liking. “Riesling can be a tough wine,” explains Phillips. “It can be naturally acidic, unlike Chardonnay, which does not have the same level of natural acidity. Since Riesling does, a lot of people find it too tart sometimes.” At the end of the seminar, Phillips comments on the general trends in Canadian wines. “A lot of wineries are making sweeter red wines. Often these wines aren’t ‘sweet,’ but there is a lot of residual sugar in them, and there is a huge market for this now.” I look around the room and see many heads nodding, affirming his statement. After the event I venture back to the tasting floor to purposely sample a handful more Canadian reds, noticing that the confected, syrupy wines are well liked by many event-goers.

The next day, I’m on a 200-kilometre trek to the 4th annual Grande Dégustation de Montréal. This year, 170 breweries, distilleries and wineries are showcased, with South Africa highlighted as the featured country to celebrate 20 years of democracy. With 22 producers from South Africa and 130 products from the Western Cape region — both impressive numbers for the rapidly changing geographic region — there are plenty of new and unexpected wines to taste.

At the booth exhibiting the wines of Rupert & Rothschild — a brand known for the prestigious partnership shared by Baron Benjamin de Rothschild in France and the Rupert family in South Africa — I try two Bordeaux blends that are both luscious and velvety smooth, thanks to the delightful balance and dominance of Merlot. “These world-class wines are elegant and geared more toward the luxury consumer,” explains Sheila Whittaker, brand leader of fine wines for Vins Philippe Dandurand Wines, the company representing sales for Rupert & Rothschild in Quebec. “You can tell by tasting them that these are very high-quality red wines. Most can’t even believe they’ve been produced in South Africa.” She’s right. In a blind tasting, South Africa would not have crossed my mind as a possible region of production; I probably would have guessed both wines to be from Bordeaux.

Red wines aside, South Africa, like the Loire Valley in France, is predominantly known for its production of white wines using the Chenin Blanc grape varietal. Also known as “steen,” Chenin Blanc is actually the most widely planted variety in the country. Not far from the Rupert & Rothschild booth are the wines from renowned producer Ken Forrester, whose wines are available in both the LCBO in Ontario and the SAQ in Quebec. Forrester, who is surprisingly on-site to promote his products, is charming in his descriptions that bring his three expressions of Chenin Blanc to life. He speaks at length about his range of wines, explaining that the idea behind the “Petit” range is for it to be like a beverage. “When you come home from work, and you think to yourself, ‘I need a glass of wine,’ this is what you need. If after taking a few sips you can say ‘Ah, bon!’ that’s all you want,” he says, chuckling heartily before continuing. “Moving on to the Old Vine Reserve range, these wines come from older vineyards, and this always means the wines will be more concentrated.” He takes a sip of the wine and nods, then explains that the fruit of this vintage has more power in its flavour, making it rich and ideal to pair with food, especially if it’s spicy. “Chenin doesn’t bite,” he says. As he generously pours the pièce de résistance, his FMC Chenin Blanc, 2011, he no longer holds back any excitement. “This is from the ‘Icon’ range of wines. These are concentrated and have a very complex expression of the Chenin Blanc grape. These wines will improve as they age, anywhere from 10 to 15 years.” Before tasting, the aromas of white flowers, lemon rind and honeysuckle abound. The wine dances on my palate — not from petulance, but from the combination of peach notes, pear and the pronounced acidity that, taken together, prove the depth of expression that is the wonder of the Chenin Blanc grape varietal.

Tasting aside, the biggest lesson I learn during a weekend of food and wine in Ottawa and Montreal has to do with the exhibitors themselves. I realize it was the passion the exhibitors demonstrated in presenting their products that spoke to the true success of both events. On the way home to Toronto, I think about all of the new and unexpected wines I have tried, and I can’t help but wonder what will be in store next year. And so I bid Montreal à bientôt, eager to see what next year brings.