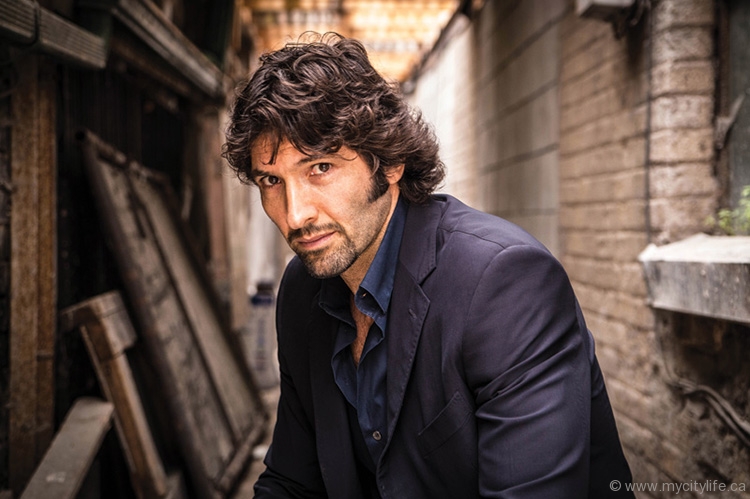 CL: In your latest film, Hopeful Notes, you play Alex — who’s a bit of a lost soul searching for meaning in life. Tell me about how you prepared for this role.
WN: Just like all the other roles, I get the script and I read it and I read it, and I keep reading. You keep reading because you want to know why the author wanted to do this movie, you want to know what’s the message of the movie, of the characters, of all the scenes. Once you get in touch with it, you start to get inside the mind of the author, and then something happens. You say, “OK, I understand why Alex does this.” Then you start to get inside the brain of Alex — maybe his shoulder hurts, maybe all the things he’s bringing are from the past or he’s guilty of something. And then you start seeing his shoes, his socks, his pants, his shirt, the tie, you know, so then you fix it. You see, an actor is like a sculptor, a sculptor that sculpts the character and then puts his heart into it. When Donatello makes a beautiful statue, he sculpts the face, finger and the nails, you know, he starts with this and then creates it, and it’s almost alive. That’s what an actor is: a sculptor.

CL: What message do you hope this film brings to those who watch it?
WN: The message is no matter when you go to sleep at night and when you wake up in the morning, the last word has to be hope. The hope through this movie is through music, but hope for tomorrow. Like Scarlett O’Hara from Gone With the Wind says, “Tomorrow’s another day.” That’s what it is.

CL: You were 19 when you moved to L.A. to study acting. But what has acting on set taught you that a class never did?
WN: On set you learn a lot. That’s the real deal. You learn a lot of acting when you’re in a class. But when you’re on the set you learn to get to the point. Robert De Niro said, “Sometimes you just gotta get up and do it.” Just do it. And that’s about life. Sometimes it’s important to feel it but sometimes it’s “OK, now it’s time to get up.” That’s what it is on the set.

CL: You’ve led a bit of an eclectic life with ups and downs along the way. You’ve written a book, raced cars, tried your hand at boxing, were a contestant on Italy’s Survivor in 2003. But there were also moments when you were floating around and waiting. Are you happy with where you are at this moment?
WN: I believe that all the moments and ups and downs that I’ve had brought me here. I was always continually searching, searching for things. I had good sensation acting, I had good emotions acting, but there were times I needed other emotions to be stronger. That’s why I went into boxing. That’s why I did a lot of things and I pushed myself to the edge. I just want to push and I want to see — that’s, by the way, one of the things I want to do tomorrow, the Edge Walk. That’s the feeling of what it feels like when you’re almost on the edge and how far can you push the edge. How far can you go? That’s the question. I believe that whatever comes in your life is because you create it, because you want it. And looking back, I was looking for myself, I was looking to know myself more, and sometimes I was just bored.

CL: When you launched your career, and your fame increased, you garnered a reputation as a heartthrob. Did you ever find that attention overwhelming, being considered one of
the sexiest men in Italy?
WN: Well, the attention sometimes was too much, because I am a very private guy. Even if I’ve done a lot of things in my life that don’t seem private — I worked in America as a Chippendales dancer — I’m a private guy. Sometimes when you’re so known you have no privacy. When you go to a restaurant or you go to the bank or the grocery store, people recognize you. And in Italy they are pretty passionate when they recognize you. So, you know, sometimes it can be nice, good, and sometimes it can be a little bit too much.

CL: In Italy, you were well known for your role on Incantesimo, but eventually left the show because you felt you were becoming too much like your character and struggled with the emotions involved. There’s a story about how you then went on a journey, walking for three days. Why do that?
WN: I left the show after two years. We were done shooting, a driver took me home at 5 o’clock, and everything was over. After two years of doing so much and caring so much, everything was over — it was my choice, but everything was over. I felt lost. So what I did, it was 8 o’clock, I was in Rome, I grabbed a little bag, and I just walked outside, and I started running, and then I walked. I walked for three days, from Rome to Elba Island, which is in Tuscany. So it was about 200 miles.

CL: Why not take a car or a scooter or a cab?
WN: No, no, no. Because when walking and running, you realize something. Life is a journey, and I wanted to do it on my own. Me, just me.

CL: What does success mean to you?
WN: Success? I believe that there’s a lot of meanings for a lot of people. For me, success is something to be complete, to be fulfilled, of what you are and what you do. There was a point three or four years ago that I was very successful, and I loved the success achieved through my work, my job, my career. But I looked at myself in the mirror and I just didn’t like what I saw. It was not a connection for what I was inside. So then I started a very deep journey that’s still going on. I want for what I see to be what I am. So that’s success — success is really fulfilled when you discover who you are inside, and it matches what you do and what you are outside.

This interview has been edited for clarity

Instagram
Because sometimes, you just need a good prank! @sh