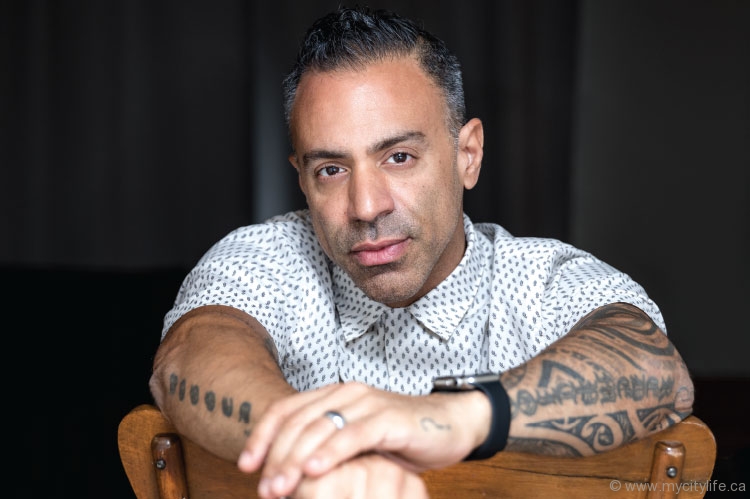 And for his next trick… famed Toronto mentalist Bobby Motta welcomes City Life into his home. From skydiving in Panama to being named one of the top magicians in the world, Motta reveals all in the comfort of his own living room.

TO PURCHASE THIS ISSUE WITH BOBBY MOTTA PLEASE CLICK HERE

The magician places a large dice in my hand, then takes my wrists and gives them a shake.

“Now open your hand. What number is it?” he asks.

I absolutely do not.

“Don’t worry about it. I do weird things sometimes,” he says. Then he dangles my watch in front of my face, which I hadn’t even realized was missing from my wrist. “And here’s your watch back, by the way.”

Legendary mentalist Bobby Motta and I are standing in the baby’s room-slash-study of the cosy Toronto townhouse he shares with his wife, Alana, their three kids and their two dogs. On one side of the room is a wall of posters and artifacts from the last 15 years he’s been a professional mentalist, including a framed set of antique keys from one of Houdini’s tricks. On the other side of the room is a baby crib.

This room alone exemplifies Motta’s lifestyle. As one of the world’s top mentalists — having earned the praises of celebrities like Russell Crowe and friendships with fellow world-class magicians like David Blaine — his most impressive trick yet has been balancing the hectic schedule of his multifaceted magic-making empire with his personal life.

Actually, “hectic” is an understatement. Every Friday and Saturday, Motta performs at Dave & Buster’s in Vaughan, a show that’s become a hot ticket for tourists and locals alike, and during the week his days are slammed with gigs for corporate clients like Google and Nike. And then, of course, there are his private summons from A-listers, who fly him down to, say, L.A. for a night so he can blow their besties’ minds in their own abode.

At 45 years old, Motta is five feet, six inches of pure muscle, having appeared in a few fitness competitions over the years, and he’s covered in tattoos that range from an optical illusion (the profile of a face that, at a different angle, looks like the word “liar”) to a tribal-print sleeve that covers his left arm. He may not fit the stereotypical description of a magician, but then again, as he reminds me, the industry has evolved since its Houdini days. Modern magicians have built on what’s already been done to create an even more baffling show for the 21st century.

“We have our four founders, we have the people that laid it out for us. Like, the cups and balls dates back to thousands of years ago, and card tricks date back hundreds of years,” says Motta, whose show at Dave & Buster’s is the longest-running mentalist show in Canadian history. “And you have the new guys now — a whole new generation of creators that come out and say, ‘okay, what they’ve done, we can take those exact same principles and make them better.’”

For Motta, the magic all began when he was four years old. He was at a family function when his uncle showed him a trick that involved his false tooth and a Chiclet — and the inventiveness of it stuck with Motta for years to come.

As the years went by, Motta continued to fuel his excitement for magic, which turned into a passion for mentalism, and quickly developed an immense talent. He was completely self-taught, devouring magical literature and practicing until perfection. But it wasn’t until 15 years ago that he quit his day job as the owner of a car dealership to pursue his dream full-time.

It was a good decision. Today, Motta is one of the most influential people in the biz. Not only is he a performer himself, but he’s also known worldwide as a maker of magic tricks, coming up with original ideas and advising big names like Blaine and Criss Angel. He even founded Motta Magic, a program that passes on his tips and tricks to others in the industry.

“Mentalism is about exploring. It’s about connecting. It’s not about the mentalist, it’s about the people that are there together”

“It’s a gift, to be able to create magic,” says Motta, who grew up in Thornhill, Ont., and has performed on almost every continent. “There aren’t a lot of creators whose magic is being used by big names, so for me it’s an accomplishment. It really feels good.”

Motta’s realm is perhaps the most challenging one in showbusiness, yielding a miniscule number of truly successful mentalists — especially outside of Las Vegas, magic’s ground zero. But Motta has made it, and done so by mixing a lifelong excitement for his craft with authenticity and a lot of heart (and a lot of literal hands-on learning; a few years ago he accidentally slammed his hand into a needle while performing the infamous stick-cup trick). He’s in it for the fun, and his fans love him for it.

“He stuns them. He mesmerizes them. He’s outrageous,” says Mary Patrick, special events sales manager at Dave & Buster’s in Vaughan. Patrick discovered Motta eight years ago when he was the opening act for another performance — and she was so impressed that she asked him to come on as her headliner. “His show is like great comedy with that ‘wow’ factor, because you are laughing through it, too. That’s what’s great about him — he is a showman, and he has that sense of presence.”

“He’s just a genuinely good guy, and his personality really shines through onstage,” says childhood friend Les Farkas, who owns a Wasaga Beach- and Panama-based skydiving company. Last year Farkas introduced Motta to what would become the mentalist’s second love: falling from the sky. In fact, the day before our interview, the Motta family had just returned from a weeklong visit with Farkas in his tropical paradise, and the adventure sparked an idea in Motta’s mind: why not mesh mentalism with skydiving?

While that record-breaking trick is in the works, Motta is also gearing up for his biggest year yet. On March 17, he’s launching his new show, “Cryptic,” at Dave & Buster’s (he’s been performing “Gray Matter” for the past two years). He’s also in talks with a network about a television show, and there’s a North American tour on the horizon. He plans at some point to knock out a few shows in London, England, where he can visit his buddy Andy Nyman, who crafts material for the likes of Derren Brown — one of Motta’s personal favourite mentalists.

The work can be overwhelming, especially when dealing with an intense, almost obsessive-compulsive desire to perfect his craft. This is Motta’s biggest challenge — he claims he will never feel truly at peace with his work, since he will always see room for improvement. But at least there’s a silver lining to his perfectionism: some of Motta’s best work has emerged from his desire to achieve a mentalist’s nirvana with every trick.

“I’ve had magicians from all over the world come to see my show just for this one piece that they heard about — it’s called ‘Advil,’ a piece I haven’t released yet — and that came to life through a hardcore obsessive-compulsive session,” says Motta. “I was just tuned in, and it was like, a week-long process that brought something into my world that was just amazing.”

“He’s very focused,” says Farkas. “When he gets onto something, he will just drive at it, drive at it, until he not just gets good at it, but gets really good at it.”

One thing he’s almost perfected is his parenting skills. His four kids adore him, and he even takes his two boys to most of his shows so they can help set up, snag front-row seats and, of course, keep an ear out for people’s feedback. But, he explains with a laugh, fatherhood has even more ups and downs than his profession.

“Bobby sometimes butts heads with our eight-year-old son because they are so alike,” says his wife, Alana, who not only holds down the home fort but her husband’s business matters, too. “What can I say? Like father like son!”

In the midst of it all, Motta stays grounded by training his dog in French, meditating barefoot in the grass, whipping around Toronto in his Porsche 911, savouring a few chocolate hedgehogs from Purdy’s and partaking in what he calls “jam sessions” with fellow mentalists, during which they bounce bizarre and groundbreaking ideas off one other. “Gather six, seven mentalists in a room and things get really weird,” says Motta with a laugh.

But, of course, his ultimate outlet is his practice. Just as mentalism offers viewers an escape, an opportunity to indulge in the mysteries of their own minds, it’s also Motta’s best form of release.

“Human beings live in a world with so much stress, so much pressure,” says Motta. “And I think magic and mentalism is an outlet that helps you escape reality Mentalism is about exploring. It’s about connecting. It’s not about the mentalist, it’s about the people that are there together.”

If there’s anything Motta has learned from mentalism, it’s that life is all about perspective. He gives me a concrete example: growing up, he was always terrified of the number 13 — even while working out, he’d avoid completing 13 reps, stopping at 12 or quickly pushing himself to complete 14. But a decade ago, he decided to switch his perspective, making 13 his lucky number. He even got the number tattooed on his neck.

And how has his new relationship with XIII been working out for him? “It’s been amazing!” he says. “It goes to show you that it’s all in your head. In line with what I do, it’s important to remember that it’s all perspective. Look at the way things are around you and design your own life pattern.”