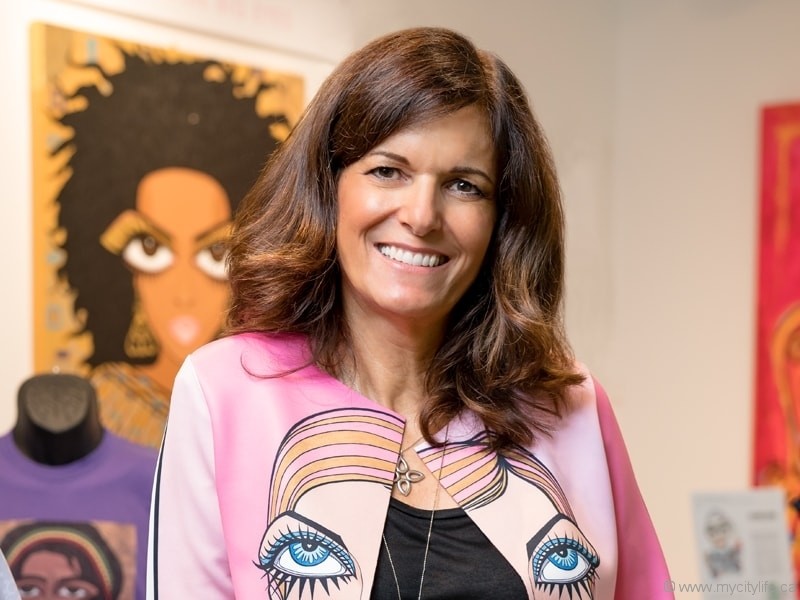 Vella’s pop-up gallery in Yorkville Village displays everything she’s become known for, including many of her WIDE BIG EYES pieces

With a new gallery in Yorkville Village and a booth at the upcoming Interior Design Show, Michelle Vella illustrates that it’s never too late to try something new.

Contemporary artist Michelle Vella is a trendsetter and true original, bursting onto the arts scene just three and a half years ago by inventing an entirely new portrait style, WIDE BIG EYES, and reinventing herself in the process — at age 50.

At 50, you’re pretty much locked and loaded onto life’s path and into your preferences. Vella, however, chose this time to completely change her life’s direction.

After graduating with a bachelor degree, fine arts, in 1986, Vella decided she did not want to be a “starving artist.” She worked in an art gallery, later was involved in marketing in high-tech, learned Photoshop and design, was a portrait photographer and then started her own graphic design company in Vancouver in 2005.

Moving back to Toronto in the spring of 2010, Vella continued pursuing her graphic design business, until the fall of 2014 when she started sketching and putting her art on Instagram. In May 2015 she discovered her WIDE BIG EYES signature style and her meteoric rise began.

“I knew I had talent, but didn’t know how to express it. I started painting full facial portraits of people in the fashion industry, and that’s when I thought I could have a career as an artist and fashion illustrator,” recalls Vella. “My WIDE BIG EYES style started then because I was looking for a signature style and it developed quite naturally. I started to look at portraits and saw the eyes coming out of the face and I focused on that look,” she says.

“That look” was an immediate hit with those in her orbit. When celebrated fashion designer Diane von Furstenberg discovered Vella via her Instagram posts, she just adored the WIDE BIG EYES portrait Vella had posted of her and simply had to have it. W Magazine connected the two, and Vella personally delivered the portrait; the piece is now part of von Furstenberg’s art collection at the DVF Fashion House in New York City. Just months after its beginning, Vella’s reinvention and new career took off.

Vella has now been featured on CNN Style, the Marilyn Denis Show and in countless magazines, including Elle Canada, Harper’s BAZAAR Thailand and W Magazine because of the captivating, almost hypnotic effect WIDE BIG EYES portraits have on the viewer and the eclectic personalities from pop culture Vella has chosen to feature.

From the Beatles to Bowie and Beyoncé, to the Rolling Stones, Gord Downie, Diana Ross, Twiggy and Audrey Hepburn, each of these familiar icons is given a completely new look by Vella’s signature style. Perhaps Vella’s most stunning work is that of Jackie O, with her trademark sunglasses, but made haunting by the choice of painting her in the pink jacket and pillbox hat she chose to wear on that tragic day in Dallas.

“For my audience, it’s which icon they identify with,” says Vella. “It can be about the eyes, but also about the person, and they remind them of a time in their life, something that resonates to them about the legend they are looking at. There are no wrong answers when looking at a piece of art — it’s whatever you see in it.”

Vella has since expanded her imagery onto hand-painted Bidinis luxury Italian bags and clothing, which fans enjoyed at her gallery’s pop-up in Yorkville Village this past September. She will also be launching her new WIDE BIG EYES Home Collection at the Interior Design Show from Jan. 17–20, 2019, at the Metro Toronto Convention Centre (booth 2135), which will include a capsule luxury furniture collection and home accessories, plus original art and limited-edition prints.

Now a thriving artist, Michelle Vella is proof you’re never too old to explore new possibilities and opportunities, to push boundaries and visit new vistas, and that age is definitely just a number.

Photography By Carlos A. Pinto

Montessori School Of Kleinburg - A Lifelong Love of Learning