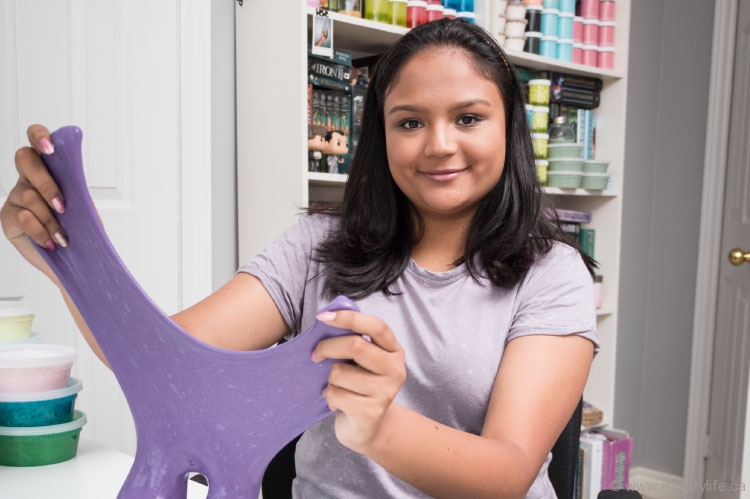 One Toronto Instagrammer-turned-author is cashing in on the Internet’s latest obsession: slime. Sixteen-year-old Alyssa Jagan is in the business of poking, popping, stretching and pressing the sticky substance, bringing joy to nearly 700,000 Instagram followers. Now, with her first book nearing publication, the young entrepreneur has managed to monetize this oddly satisfying Internet phenomenon.

There is no way you haven’t been slimed. If you have kids, you’ve likely already made several trips to your local craft store to pick up Elmer’s Glue by the gallon. In fact, all the slime recipe ingredients have been strategically placed at the entrances. Or, if you’re a full-grown adult, you’ve probably been inundated with hundreds of ear-pleasing slime videos that you just couldn’t help but watch three or four times over. We don’t blame you; it’s addictive.

Slime is comprised of two main ingredients: glue and activator (typically contact lens solution and baking soda, liquid starch or laundry detergent). From this basic recipe you can add lotions for scent, shaving cream for added fluff, foam balls for that famous crunch or various glitters and pigments for colour. It’s a total sensory overload!

There’s a science behind it, but frankly we’re more interested in the insane following that 16-year-old Alyssa Jagan has amassed and how she managed to do this as a full-time student, who also happens to play for her school’s basketball and badminton teams, co-heads spirit council and art club and is a proud member of the robotics team.

Jagan was always a crafty person, and often took to social media to show off her other passions, like needle felting and polymer clay charms (certainly a step up from the beaded lizard keychains and gimp bracelets of the ’90s). When she stumbled upon a few dozen slime videos by other creators, Jagan was inspired to try out a few recipes herself — it was right up her alley. “I was actually pretty late to the trend, by a couple of months, compared to the other slime accounts,” says Jagan. “But I decided I wanted to give it a try — I honestly didn’t really think it would be a thing. Neither did my mom.”

With her mother’s permission, she uploaded her first video — it wasn’t long before her account, @craftyslimecreator, would go viral. As Jagan experimented with variations of the sticky sensation she started a routine of posting three videos a day, filming all the clips over the weekend so as not to interrupt her school responsibilities. “It was so much fun to try new recipes and develop new types of slime,” says Jagan. “When I first started there was your basic glossy slime and some floam, but not the comprehensive list we have today.”

What’s more, Jagan has also proven herself to be something of a social media genius. Not only do her videos garner an average of 200,000 views each, but her engagement is through the roof. How does she do it? Simple: she posts a fun, completely unrelated question in the caption — What’s your favourite Disney character? Which emoji describes your day? — compelling fans and followers to join the convo. “I want to make it as easy as possible for my followers to interact and get to know each other,” says Jagan. Her favourite type of question involves encouraging her audience to compliment the last person to comment above them, a random gesture of kindness. “I try to do this every so often because it spreads so much positivity,” says Jagan. “Sometimes people online can be mean, so I try to promote kindness as much as possible.”

Jagan’s mom, Ahilya Singh, believes parents should encourage their children to utilize social media for more than mindless scrolling by promoting the creation of original content and community building.

“Kids are so creative, and I really wish more parents would let their kids experiment with things the way Alyssa did,” says Singh. “I think the first inclination is to say no because [parents] aren’t familiar with the medium, but I think [social media] is their future and we need to do our best to guide them through it regardless.”

Posting so often meant that Jagan had to get creative, and it also meant that slime-filled yogurt containers filled every inch of her bedroom. “As supportive as she is, my mom came into my room one day and suggested I cut back,” says Jagan. “So being the logical person I am, I decided to sell it so I could have the space to make more. That was my thinking; it was never for the money.”

When Jagan began selling her batches of slime, she had no idea how popular her Etsy shop would become — keeping up with the demand was nearly a full-time job in itself. In less than a year, she managed to sell more than one thousand containers of slime. Each order ranged from $8 to $16 depending on materials and quantity. This means that the young entrepreneur has earned thousands from her accidental business. “All the money I’ve made is going toward my university tuition and a new camera,” says Jagan. “I do all my filming on my iPhone but I’d love to use a professional camera.”

“We really have to push our kids on the idea of entrepreneurship,” says Singh. “They have so many ideas, and we really owe it to them to allow them to pursue their talents.”

Jagan’s hard work and slime-celeb status also snagged the attention of a number of agencies and brands wanting to collaborate with @craftyslimecreator. Along with her mother, Jagan weighed the options and decided that a partnership with her editor, Joy Aquilino, was a no-brainer.

It took three months to shoot and produce her first book, Ultimate Slime, which features more than 100 different borax-free DIY slime tutorials — fishbowl, crunchy, fluffy, you name it. “I like to call it ‘the guide to anything and everything slime’ — there are so many things to learn,” says Jagan.

For the ambitious 16-year-old, it’s no surprise that one of her personal goals was to author a book before she finished high school. “I didn’t think it was possible, honestly,” says Jagan. “It’s totally surreal to me.” Ultimate Slime is set for release in Canada on Oct. 17 and will be available in eight different languages globally.

Photo by carlos a. pinto

1. Place the glue in a large bowl. Add the foaming hand soap, shaving cream, cornstarch, and 2 tablespoons (30 ml) of the lotion. Cornstarch isn’t necessary, but it helps thicken the mixture, creating a smoother, richer texture. It’s fine to only use shaving cream, but the cornstarch makes the slime creamier. Add color and/or fragrance oil if you like. Mix thoroughly.
2. To “activate” the glue, add the baking soda, then the contact lens solution. Mix thoroughly. Repeat if needed: Different glues activate differently; also, the amount you add will affect the slime’s consistency, and you can adjust it to achieve a consistency you like.
3. Once the mixture is slightly sticky, start to knead the slime. Dip your fingers in contact lens solution before kneading so less slime will stick to your hands. Playing with slime is the best way to mix it fully and achieve the best possible texture.
4. Add the remaining 2 tablespoons (30 ml) lotion for extra stretchiness.
5. Store the slime in an airtight container so it doesn’t dry out. Note that this type of slime will deflate after 2 to 4 days.