The Language of Connection – Acro Buddhas 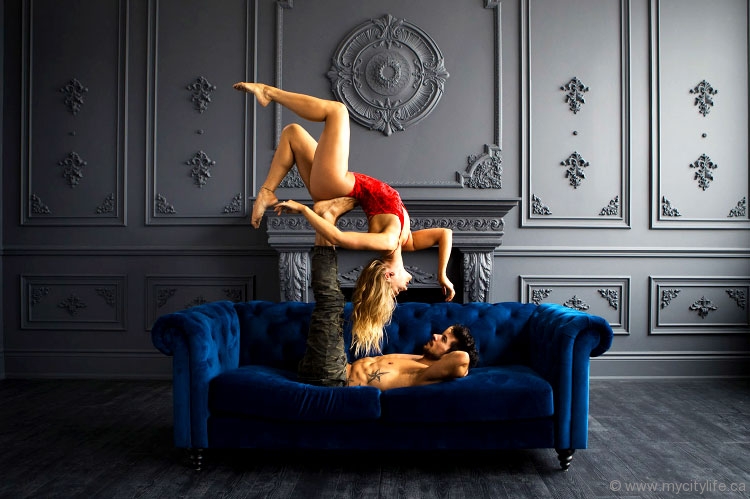 Acro Buddhas Miranda Cobbett and Ryan Scott have increased their love and passion for each other through the meditative practice of acro yoga.

Love at first sight is typically reserved for Hollywood rom-coms and fantastical depictions of romance, but what about love at first pose? This is true for the dynamic duo behind the popular and successful acro yoga brand Acro Buddhas.

Miranda Cobbett and Ryan Scott had been together for six years before Cobbett stumbled upon her first glimpse of acro yoga on Instagram. She showed it to Scott, and they attempted to do the acro yoga in her parents’ backyard.

For the average individual, performing acro yoga would be incredibly difficult. But for Cobbett, who has years of yoga and competitive dance and cheerleading experience, and for Scott, who has had years of fitness, martial arts and gymnastic training, it came natural to them, and they loved it.

“At six years, you’ve established trust, connection [and] playfulness. It’s always exciting, but this is like, ‘Oh my gosh.’ It brought our relationship to another point that we can’t really see [happening otherwise],” Cobbett says.

What started as a passion project has developed into an international phenomenon. With more than 70,000 followers on Instagram, Cobbett and Scott are reaching and affecting lives worldwide with their gloriously staged artistic photos and videos.

“I think that when you are doing what you love, things just manifest. It’s crazy that something that we thought so little about has turned into something that has an international presence,” Cobbett says.

Cobbett and Scott are based in Toronto and hold many workshops around Toronto and the GTA. They also teach and perform all over the globe. As much as acro yoga has allowed them a new career path, it has also enhanced and increased their relationship in ways they would not have thought possible.

“Ry and I are able to create something together that is part of the deepest part of what we love to do,” Cobbett says. “We can communicate verbally, but we can also communicate with our bodies. He can anticipate how I’m moving, and it literally turns us into one.”

Scott adds: “It’s like this unspoken dance that we have between each other. It’s magical, and it’s really amazing to experience that and have that connection with someone whom you love and care about so much.”

Cobbett, who is a flyer, according to the terminology, describes the act of doing acro yoga as an intuitive dance between two souls. “It feels like flying, floating and it feels supportive and connective,” she says.

Scott, who is a base, feels an intense and deep focus and in the present while doing acro yoga. “It’s almost like things around you are not moving at the same speed as what you are experiencing and what is going on within you,” he says. Sometimes the two of them switch roles, allowing each other to experience what the other side feels like.

While acro yoga has increased and evolved their already-strong relationship, Cobbett and Scott have also seen the impact of it on the people with whom they have worked.

Often, people come in who are skeptical and down on their selves about the entire process. For those who are more into fitness, it can be very humbling, as it is not just about strength, but also about openness and focus.

By the end of the class, people are successful and happy, hugging and high-fiving others they just met, and they wonder how the 90 minutes flew by so quickly. “It gives me goosebumps every time,” Cobbett says.

That, in a nutshell, is the power of acro yoga. It helps you focus and be in the present, something that we often leave to the wayside, distracting and keeping ourselves busy as much as we can.

Acro yoga grants you a deeper sense of connection, with both your partner and within a community.

And it is empowering, because you are able to create something special and unique together, sharing that with everyone around you, everyone who gets to see it. This is certainly true for Cobbett and Scott, and that easily comes through on Instagram.

As acro yoga’s burgeoning success continues to rise, you can be sure to see the Acro Buddhas grow alongside it. With plans to evolve and be more creative with their poses and to continue pushing their limits, one can only wait to see what amazing, majestic routines they do next.

House for Sale: Country Charm and Luxury in Foxwood

The Cornerstone of Balancing Business and Home - Artistic Stone Design

Our July/August #CityLifeMag issue is out now! Gra

CITY LIFE MAGAZINE  @citylifetoronto
RT @RexChapman:If Maxwell and Finnegan can wear their masks and be happy about it you can too... https://t.co/cjCaXC42e7
Jul 10 reply retweet favorite 3 days ago

CITY LIFE MAGAZINE  @citylifetoronto
A favourite story that @MurdaBeatz_ likes to tell happened one night when he was chillin’ at Drake’s home in Toront… https://t.co/5JsnBxEpRS
Jul 06 reply retweet favorite 1 week ago

CITY LIFE MAGAZINE  @citylifetoronto
RT @RexChapman:If Maxwell and Finnegan can wear their masks and be happy about it you can too... https://t.co/cjCaXC42e7
Jul 10 reply retweet favorite 3 days ago

CITY LIFE MAGAZINE  @citylifetoronto
A favourite story that @MurdaBeatz_ likes to tell happened one night when he was chillin’ at Drake’s home in Toront… https://t.co/5JsnBxEpRS
Jul 06 reply retweet favorite 1 week ago

Our July/August #CityLifeMag issue is out now! Gra

The Language of Connection – Acro Buddhas