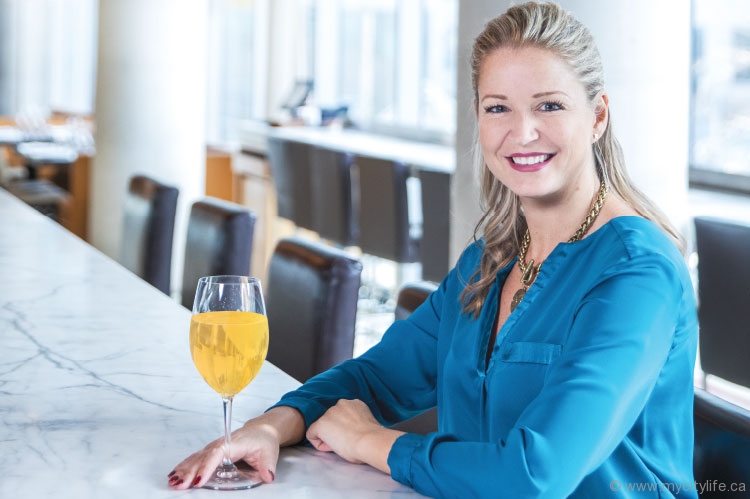 Over truffle fries and mimosas, Shannon Tebb — Toronto’s own “headhunter for the heart” — teaches us a thing or two about date etiquette, flirting techniques and what it’s like being a professional ’shipper.

This I learn as we sidle into a sunlit booth at Luma on King Street, the swanky, sunset-coloured restaurant atop the TIFF building, and one of Tebb’s favourites in Toronto.

“She’s coming in from the Dominican Republic tonight! Foxy Roxy!” She scrunches her nose. “She came with the name. I mean, I think I might shorten it to just Roxy.”

It’s one of the few matches she’s ever had zero control over. Tebb is Shanny in the City, one of Toronto’s elite, boutique matchmakers. And today, we’re on a date.

Okay, it’s not actually a date. But as Valentine’s Day inches closer, blinking its little heart-shaped eyes at us, and the activity on Bumble and Tinder accounts intensifies, I was curious: How does a real-life matchmaker fare these days? And what could she possibly be like on a real-life date?

Turns out Tebb is sharp and hilarious, and even though this is technically an interview, she’s masterful at keeping our chat two-sided. After ordering us a plate of truffle fries to share, she makes carrying conversation feel like an art form, always knowing when to speak and what to say.

“If I’m talking to you about, say, Europe, piggyback off of what I’m saying. It doesn’t matter if you’ve never been there — just ask me about it,” says Tebb. “Or, you know, ask me why I chose this restaurant for the date. ‘Why’d you choose Luma?’ Well, because I love the truffle fries!” She takes a stick of the glorious, garlicky goodness and dips it into some creamy aioli. “That’s a really good icebreaker, you know,” she adds as she pops the fry into her mouth.

As one of the best-known matchmakers in Toronto, Tebb doesn’t disappoint. She’s a certified life-skills coach, so she’s able to fine-tune her clients’ “active listening” and “self-disclosing” skills, and puff up their confidence before shipping them out on dates. Her favourite technique: having her clients write down five things they have to offer and telling them to post their list by their bedroom mirror as a daily mood-booster.
“If you’re not happy with yourself, you’ll never be happy in a relationship,” says Tebb. “A lot of people’s lives are just work, gym, bed, work, gym, bed. I help them fill their jar with lots of rocks so they have lots to share.”

Tebb has coached 300 singles, and 74 per cent of her matches make it past the third date and into a relationship

She’s taught men about wine. She’s gone on mock dates, taking her clients out and educating them on date etiquette along the way, from keeping track of a date’s drinks to hand-touching and light flirting techniques. And then there’s her wingwoman service — popular among divorcées — where singles or clients can hire her for a Saturday night on the town, during which Tebb helps connect them organically with other singles, later providing constructive feedback on how they could improve interacting with the opposite sex (“I like to put people in the physical environment, because that’s how you learn.”).

Years of training aside, Tebb is a born matchmaker. Raised by a single mom after her father passed away, Tebb spent her childhood years observing adult interactions, getting to know what worked and what didn’t.

“I never played with Barbies — instead I was the kid sitting at the dinner table listening to my mom chat with her friend,” she says. “I was always intrigued by that.”

Fast-forward to her 20s, when she spent her university years coaching her friends on how to date-prep and deal with relationship woes while earning her bachelor’s degree in anthropology and sociology. Eventually she realized she could actually get paid for her ability to fan others’ flames.

So, in 2010, Shanny in the City was born. Tebb has coached about 300 singles and matched 50 couples since then and boasts a 74 per cent success rate (meaning 74 per cent of her matches make it past the third date and into a relationship). And although she opened up shop in the age of Tinder — which boasts 26 million matches each day worldwide — the online dating thing hasn’t touched her numbers. In fact, business has never been better. She’s renting an office space on Temperance St. and plans to hire assistants this spring. And while she’s always only taken on local clients, she’s starting to go international. Recently, she was approached by one of the top 10 wealthiest women in Canada, who’s looking for a very specific type of man: a ski-loving Colorado man, but not the fur-wearing Aspen dude, more like a cool, hipster guy. It’s Tebb’s biggest project yet, and she’s got a big plan to go with it.

“I might be flying down there to do some skiing and recruiting,” she says. “I’m also working with some Colorado matchmakers to source some potentials.”

The technical vibe of her day-to-day operations makes me wonder if the people dining next to us think she’s some sort of secret agent. Which, in a way, she is. Her clientele tends to be elite professionals between the ages of 30 and 50, people who have exhausted themselves on the more beaten paths of dating — be it an app or the old-fashioned method of trying to pick up at bars — and are ready to let a discreet professional do the legwork for them. “As bad as it sounds, I’m sort of my clients’ last resort,” says Tebb.

In her six years of managing other people’s dating lifestyles, Tebb has developed an intimate sense of what most people desire. While the lure of traditional marriage is lessening, she says, people still do, and always will, have a profound desire to find someone to share life with.

And what about Tebb’s own love life?

“I’m single. I’m like the shoemaker with no shoes. Oh, God, don’t put that. I know you’re going to put that,” laughs Tebb, whose Bible is The Five Love Languages by Gary Chapman, and who classifies herself as a “touch” person. “I do eventually want marriage, kids, the whole package. But honestly, I’m just super focused on my business these days. I tell my clients that I’m completely devoted to them — with no husband or children, I’m all theirs!”

And Foxy Roxy’s, of course. The day after our chat, while I’m still simmering over the love lessons I learned on my date with a professional matchmaker, Tebb’s Instagram starts popping with photos of her most successful pairing yet — her own, with the scruffy little pup. Tebb’s hashtag: “#perfectmatch.”

Jenna Caira: Beauty Tailored To you