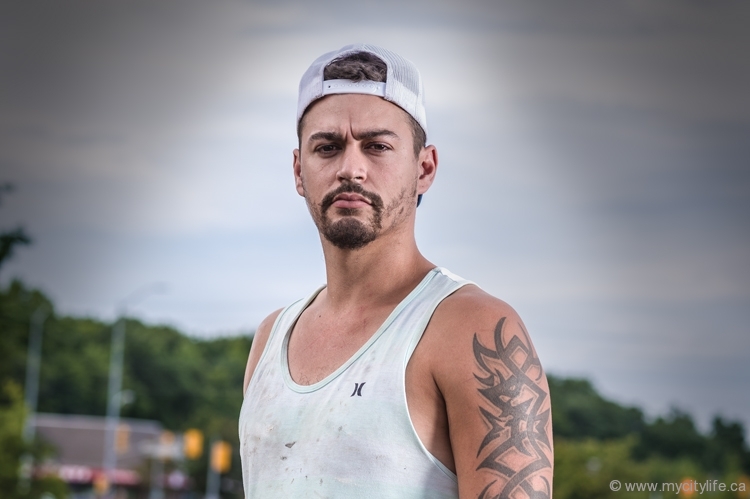 What do you do in your spare time? Justin Payne catches pedophiles. City Life sat down with the famous YouTuber to talk his controversial method and the emotional turmoil it comes with.

Sitting in a half-deserted parking lot at a nondescript mall in Mississauga, I get a phone call from a mysterious number.

“H—hi, this is Christopher,” stammers the childlike male voice on the other end. “You said you wanted to meet me here. Are—are you ready?”

It takes me a moment before the confusion fades and I realize that I’ve been Payned. I laugh, and so does my mystery caller.

“Sorry, that was probably bad,” says Justin Payne, now assuming his own 29-year-old voice. “I punk people like that sometimes.”

You’ve probably heard of Payne, the Toronto-based YouTube sensation who catches and exposes pedophiles. His channel has over 45,000 subscribers, his action-packed videos rack up an average of 20,000 views a pop, and the description on his profile reads, “Just a man who wants change in this world.”

When I find Payne waiting for me at one of the mall’s entrances, play fighting with his bodyguard-turned-best friend Gerry O’Brien, he’s wearing the standard Justin Payne uniform, looking exactly like he does in most of his videos: a tank top, shorts and baseball cap worn backwards, all splattered with the concrete he hauls in his day job.

As I sidle up to the pair, they introduce themselves and we decide to chat on the curb — but not before Payne halts our conversation to open the door for an elderly lady walking by, give her a courteous nod and wish her a happy evening.

“For me, doing these little things starts to erase all the hateful things I have in my mind. It makes me feel pure again,” he tells me. “Because right now, I feel like I don’t have a soul.”

It just so happens we’re meeting in the midst of Payne’s most challenging case yet. For months he’s been in talks with Jimmie, a 40-year-old man from Alabama who’s lured and groomed Payne’s 13-year-old pseudo-self, Christopher, via texting and phone conversations. Jimmie, who Payne and O’Brien simply call “Alabama,” plans to trek up to Toronto and meet with Christopher in just a few days. But, as the story always goes, it won’t be a minor waiting for him in the designated meeting spot. It’ll be Payne, O’Brien and their video cameras.

Throughout our interview, Payne keeps an eye on his phone. Every few minutes it buzzes as Alabama sends off another nauseating message, some of which he reads out loud, and I can tell he’s struggling to hold in his rage as he’s pelted again and again with sexually charged texts.

There’s a method to the madness of Payne’s productions, and it all starts online. Payne has multiple profiles set up on various dating sites, pretending to be either Christopher, 13, or Jennifer, 16. At any given time, he is logged into a few or all of these accounts. And he waits.

The amount of messages he receives is astounding. But in order to chase the predator and orchestrate a confrontation, they have to meet Payne’s requirements. They need to initiate the conversation with Christopher or Jennifer. They need to explicitly say they’re okay with their being underage. They need to lead the conversation. They need to tell Christopher or Jennifer the sexual things they plan to do to them, not the things they might do — that way, if taken to court, there’s no fantasy defense. And finally, it’s up to the predator to arrange a meeting. Once Payne has ticked off all those boxes, he has his next case.

As seen in his videos, Payne and O’Brien then surprise their predator and, come hell or high water, come frantic sprinter or profanity-spewing boxer, they capture the footage that will shame them for life — and, hopefully, spark a criminal investigation.

It’s not as clean a process as what’s seen on more polished programs like To Catch A Predator, but it’s the style that works for Payne. It does the job. And the goal of that job has evolved since the project started four years ago. His inaugural video, which has since been deleted, was just a social experiment. Shocked by his own success in tracking down a pedophile, he became passionate about outing these predators and committed to making regular videos. And then, when the project started gaining popularity, Payne realized he could use this platform to trigger some real action in the issue of child luring, grooming and molestation.

Of course, not everyone agrees with Payne’s method, including the Toronto Police Service (TPS). Meaghan Gray, section head of information and issues management for TPS’s corporate communications, says that while Payne’s heart is in the right place, it’s breaking too many rules — and ultimately, it’s causing more harm than good.

“We have a certain standard we need to set to do both of those things,” she says. “He does not meet it, so he’s in fact not helping us as law enforcement when it comes to getting these offenders off the streets.”

While the officers in the TPS child exploitation unit have undergone rigorous training, a lot of which focusing on the proper gathering of evidence, Payne’s only assets are his will and his tech. It’s a reflection of the Millennial generation’s way of tackling big issues — via social media. With a device in our hands, we can float over the red tape and conquer the world. Or, in Payne’s case, bring down the pedophiles.

But Payne and O’Brien were recently contacted by a Hamilton-based law firm offering their assistance pro-bono, and both of them plan to go for their PI licenses, so perhaps once they’re equipped with those tools, peace can be mediated between Team TPS and Team Underdog.

“It all comes down to the victims. It’s to offer an aid in a sense that they can confront the ones they never got to confront.” — Justin Payne

Payne came to Toronto with his mother and brother when he was about 10 years old, but before moving from Nova Scotia he had a traumatic sexual abuse experience of his own — one that he doesn’t feel like sharing today. The rude awakening seems to have stuck with him, though, and fueled his interest in exposing pedophiles and bringing them to justice. It could also be a reason why this project takes such an emotional toll on him.

“I am Christopher,” says Payne, who christened the fake profile after his own middle name. “His personality is real. It’s like a split personality without the disorder.”

In January of 2016, Payne experienced a mental breakdown triggered by the emotional build-up that comes with his job description. It was serendipitous timing, however, because that same month, O’Brien suffered a severe head injury at work and had to endure weeks of physical rehabilitation. He was also given half the year off to heal, and finding that he was bored with all the free time, he decided to reach out to Payne and offer his security services.

“It was definitely against the doctor’s orders,” O’Brien says with a chuckle.

“I didn’t really like him at first,” says Payne, turning to his partner. “You came on too strong. You’re too honest.”

But with years of training in mixed martial arts and inherent interest in enforcing justice, O’Brien was the guy for the job, and his outgoing attitude ended up being the yin to Payne’s yang. After years of wrestling with his social anxiety, Payne had unwittingly fallen into his first real friendship, and it’s changed his life and his project for the better.

Since joining the project in January, O’Brien has become beloved by the Payne fan base — which is known to be as passionate as any Belieber or Swifty. The two heroes (who look unnervingly like Captain America and Iron Man) have become local celebrities of an even higher caliber than the famed Brampton Batman, with people recognizing them even when they’re just sitting on a curb in a mall parking lot. Halfway through our interview, we’re interrupted by two security guards.

“Justin Payne?” one of them asks as they approach. “I recognize you from your videos!”

The publicity, paired with O’Brien’s friendship, have certainly forced Payne out of his shell, and he’s grateful for it. Despite the distractions, he’s still wrenched with anxiety.

“Take Bill, for instance,” he says. “He’s 63 years old and believes that you can have a real relationship with children, sexually and emotionally. He wanted to date Christopher. Every night he would make bubble tea, and he told Christopher he was gong to teach him how to make bubble tea. It’s little things like that that I think about.”

This is why Payne is so intent on catching Alabama, whose phone calls and messages to Christopher transcend any pedophilic interaction that Justin has experienced yet. Alabama refers to Christopher as his “boyfriend,” says he loves him. And, knowing he’s speaking to a young boy, he breaks down the process of sex as though he’s genuinely trying to educate him.

Less than a week after our interview, Payne accidentally posts a video containing Alabama’s phone number, prompting thousands of people to call the predator. One even warned him, so Alabama disappeared, and Payne’s plan fizzled. No matter, though — all the evidence that Payne collected was passed on to the Alabama police, and Jimmie is now facing a potential prison sentence for 31 counts of possessing child pornography. Payne and O’Brien have kept busy filming a documentary for Vice, and after that, Payne tells me, he plans to take three weeks off for a road trip to the Maritimes, the place where it all began.

It would be a welcome break from the intensity of his passion, which he’s sure will end in one of three ways: upgrading to a larger operation, getting arrested, or getting killed. As his project continues to gain momentum on social media and in headlines across Canada, Payne is getting smarter — so here’s hoping his conclusion lies in the first option. Besides, both he and O’Brien have their own families to protect now, Payne’s being his eight month-old son and O’Brien’s being his wife and two little girls.

“These videos are getting out there,” he says, “and people are being more vigilant and aware for the young people around them.”

Payne spares a grin. “We’re at the forefront.”

In Conversation With … David Rocco