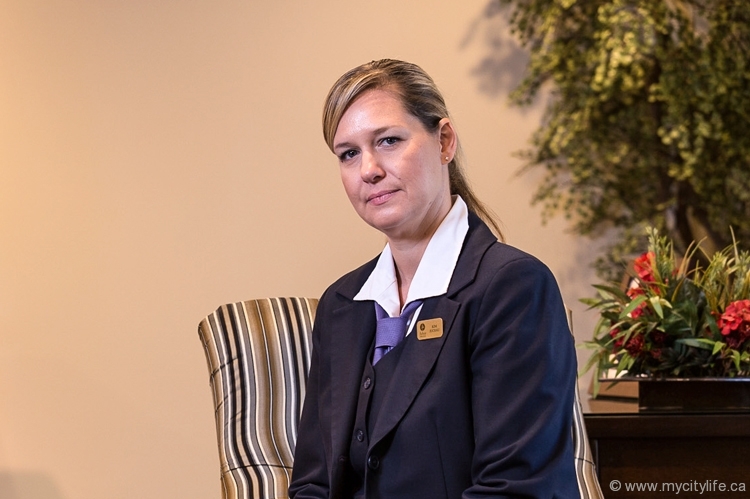 The media often portrays funeral directors as melancholy and mysterious, but in reality, they’re the heartiest people out there. City Life meets three local funeral directors to unveil their day-to-day reality — which is a lot sunnier than most might thin.

Trying to get a funeral director to look grim is actually a lot harder than one might assume.

The flash goes off in Kim Juchau’s face as I plead with her to give the photographer a scowl. But those kind eyes and small smile really, really do not want to budge. It’s against a funeral director’s nature, I’m learning, to be severe.

In fact, the more of them I meet during this day of oddly enjoyable interviews, the more I’m discovering that funeral directors aren’t who we think they are.

Up until today, for me, the term “funeral director” conjured up a sepia image of a melancholy, monotone professional whose job it is to make sure those six feet get dug. Of course, having experiencedmore than one funeral myself over the years, I was aware this isn’t anything close to the truth — every funeral director I’ve ever met has been downright lovely — but thanks to fiction novels, shows and flicks, it’s what usually pops into our minds at the mention of the profession.

But even at their actual, very pleasant face value, funeral directors aren’t often seen for anything but their title. They’re either trained to keep their composure — to be an unruffled pillar of calmness for their clients — or else their clients are so wrapped up in grief while they’re working together that no one really notices that they’re real people. Interesting ones.

Juchau laughs as we switch gears, now asking her to smile broadly for the camera. This is a much easier task for the funeral director, who’s worked for Arbor Memorial, one of the biggest networks of family-run funeral homes in Canada, for over 20 years, and is now the branch manager of McDougall & Brown, the company’s Scarborough location. After being in the industry for this long, she’s discovered that the secret is to find something to celebrate in every situation, and the joy in her soft, bell-like laugh seems more sincere, more saturated, than most others’.

“When someone dies, their loved ones have to make up to 87 decisions in 72 hours,” she says later, as she leads me into the selection room. “I lost my mum when I was 16, and through the funeral experience I was inspired to get into this business, so I could help people in what can be the worst time in their lives. This is my niche — helping people through my own experiences with loss.”

I’ve never been in a selection room before, but I immediately realize what Juchau means by 87 decisions. One could make at least a dozen of them in here alone. A collection of caskets is lined up and looking pretty, each one beautiful and unique. There’s a flipbook of embroidered graphics that families can choose to add to the casket’s interior (a bouquet of roses, or a swinging golfer, perhaps), and a display of stylish urns, from ash-infused jewelry to mantelpiece clocks.

“A funeral is more about commemorating a life lived.”

“The market and families are choosing personalization — it’s not ‘one size fits all’ anymore,” Juchau tells me. “That’s the trend the industry is starting to follow. A funeral is more about commemorating a life lived.”

Sun Drews, the young funeral director at the helm of Jerrett Life Celebration Center in Thornhill, seconds that. And she loves it.

“The industry is being dragged kicking and screaming into the next chapter, and I’m excited to see that happen”

“The industry is being dragged kicking and screaming into the next chapter, and I’m really excited to see that happen,” she says. “Another funeral home in our network held one celebration in a movie theatre, for a gentleman who had worked as a ticket-taker there for years. The whole community knew him. It’s really cool that people are getting more creative like that.”

Drews takes me on a little tour of her facility and lists, with the enthusiasm of an artist, the changes she’s planning for the space. Leading me into the in-house chapel, she divulges her renovation plans for this particular room (mostly that she wants to get rid of the slightly gaudy light that streams through yellow-tinted windows), and in the room adjacent she envisions a vertical garden where loved ones can retreat when they need a moment of silence or meditation.

Every funeral director has a story to tell, the where/what/why/how of their journey into this industry. Drews’ career began with a wisecrack from a former partner. She was feeling stuck after graduating from Concordia’s anthropology and sociology program when her ex, who was obsessed with Six Feet Under, joked that she should get into funeral directing. Drews pondered over it for a year before deciding it was, in fact, a perfect fit.

“I’ve been doing this for eight years now, and people always ask how I do it,” she says. “But it’s such a privilege to be involved in this intimate group and this precious experience. The families have such amazing stories about the person that they loved. Not knowing what those stories will be, or how we’re going to honour that person’s memory, that’s fascinating.”

For Gianpaolo Bernardo of Bernardo Funeral Homes in Toronto, joining the business that his father had co-founded happened naturally. He had worked there part-time in high school, full-time in university, and eventually realized it wasn’t just his heritage — it was something he, himself, truly enjoyed.

When I ask Bernardo what he finds the most fulfilling about what he does, he chuckles. “I’m sure that everyone you’ve met has told you the same thing — helping people,” he says. “It’s a benevolent gesture that you can provide someone, and it’s not something that everybody can do. You know, it’s a unique ability to look through someone’s emotions and help them, instead of collapsing with them. The raw gratitude that families express is really what drives people in this business.”

And it’s true — everyone in the business seems to have entered it for the same reason, and that’s to navigate families through the toughest time of their lives. But while there’s a similarity in every funeral director’s mission, each personality is completely unique from the rest.

Sort of like wedding planners. There are traditional, religiously charged nuptials and there are shabby-chic celebrations; and there are the poised, polished planning professionals and more avant-garde party architects to carry them out, respectively. In this new era of end-of-life celebrations, funeral services are no longer synonymous with dark and dreary protocol, but an abundance of styles.

“There’s a lot of misconceptions about funeral directors. We’re all characters and personalities outside of the workplace”

“There’s a lot of misconception about funeral directors, morticians, undertakers —whatever Hollywood has branded us as,” says Bernardo. “We’re all characters and personalities outside of the workplace, and no one ever sees that side of us. But it’s always fun to be around a funeral director, because they always have interesting stories to tell.”

“The industry has changed so much over the years, but people still seem to think it’s all doom and gloom,” seconds Drews. “We have a pretty good sense of humour here — but our staff meetings can be so serious, it gets to the point where I want to ask, ‘Can you tell this to me in interpretive dance?’”

It takes a healthy dose of good humour, strength and grace to be the planner of the penultimate party, the orchestrator of the send-off to end all send-offs. “Some would say it’s a calling,” says Juchau.

Some might suppose that it would also take some seriously numbed nerve endings to survive the emotional stress of a job that’s so close to death, but the opposite is true: Juchau, Drews and Bernardo have all found peace in the idea of “the end.”

“It’s the one thing we all have in common,” says Drews. “It’s a very natural human experience, and I think that in our society we’ve distanced ourselves from that — and as a result, there’s been a lot of fear and discomfort around death and dying. Of course there will be sadness and grief, but I want to help people get to that place where they don’t approach death with fear.”