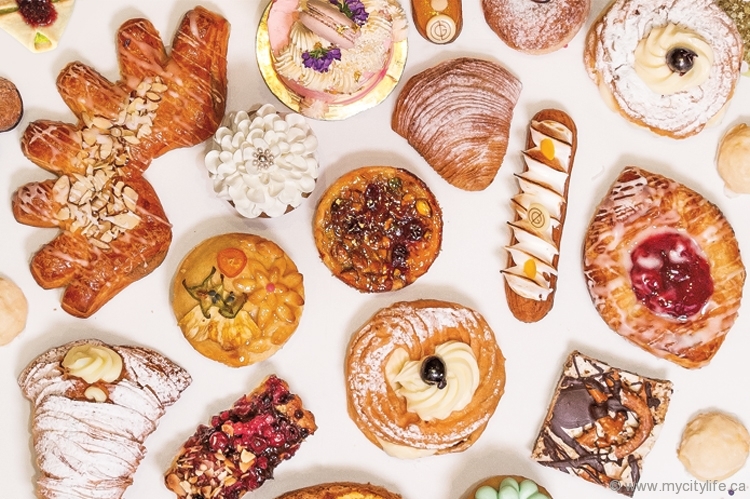 Sugar’s always been our Achilles heel, but now, in the form of otherworldly milkshakes and doughnut-croissant hybrids, it’s the latest fad to hit social media. This scrumptious renaissance reminds us of the art and culture of dessert, and that with a little bit of balance, we really can have our cake and eat it too.

I’m just a girl, standing in front of a caramel brown-sugar brownie, asking it to love me.

I know, I know. These days everyone seems to have a love-hate relationship with dessert, that naughty, beautiful curse word we just can’t stop using. I, in particular, am smitten with all things sugary, and I struggle with the daily tug-of-war that ensues between the chocoholic devil on my shoulder and the angel that just wants to keep me trim enough to fit into my pants. Or at least my car.

But despite all the fingers being pointed at sugar, there’s something sentimental about it that still has our hearts. Maybe it’s the early memory of helping Mom in the kitchen, using tiny hands to scoop out dollops of cake batter for that essential taste test. Or it could be the more grown-up associations we make, like the euphoric vision of munching our way through Paris, one patisserie at a time, or of picnicking by the Grand Canal with a cannoli in one hand and a glass of sparkling wine in the other. It could be the way our bodies react to dessert — with a burst of endorphins, often re-enacting the sensation of falling in love. Or maybe it’s a sweet medley of all the above.

Regardless of the reason for humanity’s forbidden love affair with the chocolate-dipped, the deep-fried and the sugar-coated, it’s a relationship that’s celebrated in our city. I’m talking full-on fanfare. Artisan bakeries, forever our pick-me-ups on sad or rainy days, monopolize markets and plazas, and as the GTA swells with new cultures, concepts and technologies, so does our landscape of culinary indulgence. There’s now a specialty bakeshop to suit even the most specific of cravings, from Japanese cheesecakes to dairyless, gluten-free, vegan ice cream sandwiches, and the artistry of sweet-making is in the spotlight as bakers become full-on dessert designers, devising fresh and unheard-of treats that look as imaginative as they taste. But whether your confection of choice is a next-generation doughnut-milkshake hybrid or a classic butter croissant, it all has one thing in common: the power to turn an ordinary moment extraordinary.

“A dessert is the multi-sensory finale of a meal — the fireworks,” says Joseph Montinaro, owner of West Finch Bakery in North York and Dolcini by Joseph in Kleinburg. “It should be sweet and sexy and exciting and soothing all at the same time.”

He would know. Montinaro has been crafting edible poetry for years, since before the dawn of the Instagram-worthy dessert. Sitting here in his mom-and-pop bakeshop — as I try not to inhale all eight of the house-made bonbons he’s placed between us — it’s interesting to imagine him composing cakes and candies for Ferrari of Ontario, Sophia Loren and even former Prime Minister Stephen Harper. But really, that’s the whole thesis of our city’s bakery culture: no matter how big the brand gets, that old-school sentiment will always be there.

A dessert is the multi-sensory finale of a meal — the fireworks.It should be sweet and sexy and exciting and soothing all at the same time

I was happily boggled to find out that this is even the case at Saks Food Hall by Pusateri’s, the shiny new supermarket that just opened at CF Sherway Gardens in March, and is getting ready to launch its Toronto location later this year. The massive space is a food lover’s dreamland, somehow making a casual snack feel couture-level fancy. We all know it was birthed by two luxury powerhouses, NYC’s Saks Fifth Avenue and Toronto’s own Pusateri’s, but there’s nothing industrial or big-box about its bakery, which sells a curated collection of treats from local and international bakers.

“There are some really special bakers in and around Toronto right now,” says John Mastroianni, VP of merchandising at Pusateri’s, who helped write the list of artisan brands carried at Saks Food Hall. “We love partnering with the best bakers, pastry chefs, confectioners and chocolatiers across the city, the country and the world to keep bringing people new and exclusive experiences.”

It’s these next-level places like Saks Food Hall that remind us how much the bakery concept has evolved, but it’s also a reminder that no matter how much it changes, the heart of it will never budge. Because dessert just doesn’t taste as good if it doesn’t tug on our heartstrings or make us reminisce our own sugar-sweet memories.

“It’s the very first thing we taste as infants — the sweetness of milk,” says Montinaro. “As adults, a little bit of sweetness brings us back to the very core of life. That’s why we need to give ourselves these moments of indulgence every once in a while.”

Thankfully, even the healthy foodies agree with him on that one. Amidst this explosive culinary renaissance, most of us desire to step closer to the bakery window with cartoon hearts popping from our eyes, but instead we’ve taken cover, grudgingly shunning our sweet tooths in fear of bingeing our way to a larger belt size. Admittedly, it can be dangerous living in a city where a dozen Nutella-filled bombes are just a walk away, but according to Toronto holistic nutritionist and blogger Sarah Goldstein, it’s actually important to crush our cravings every once in a while.

“The mentality of restriction is a huge problem when you’re trying to build a healthy lifestyle,” says Goldstein. “When we think of nutrition, we should think of abundance and all the amazing foods we can be eating. And with that comes indulgence, which is essential to our quality of life.”

While the media has conditioned most of us to practice this steely restriction in our diets, it’s damn near impossible to walk past the open door of a bakery and resist the sweet aromatic temptation that flows from it (Appetite actually published a study on this in December of 2015, observing that the smell of pain au chocolat made more participants choose a fatty dessert than the ones who weren’t exposed to the scent beforehand). But according to Goldstein, and most other nutrition experts, indulging can happen without overdoing it.

The trick? She suggests following the 80-20 rule: by eating healthily 80 per cent of the time, your blood sugar will stabilize, lessening the junk-food cravings — and, hallelujah, the not-so-healthy choices you do make shouldn’t affect you. In fact, responsible indulging has more pros than it does cons, my favourite one being that it can boost our emotional and social well-being in the long-term.

“Just enjoy it. Savour it,” says Goldstein, who has developed and facilitated workshops for the Toronto District School Board, The Running Room and Numeris. “Because the stress and guilt you can feel from indulging in your cravings is oftentimes much worse than what you’re actually eating.” (Note: Goldstein became my new favourite human when she told me this.)

As swimsuit season inches closer and the whole world tightens the reins on their diets, remember it’s a good thing — healthy, in fact — to go against the whole-grain every now and then, and splurge on a sweet that puts those cartoon hearts in your eyes. Because not only is it a surprisingly important part of staying swell, but really, living in a city with such a smorgasbord of dessert options, it would be a crime not to.

That being said, I decide to eat that caramel brown-sugar brownie. Because this time, I know it’ll love me back. 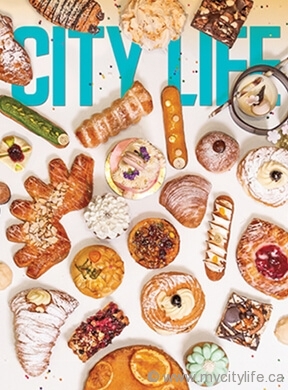 These are a few of our favourite treats — as seen on our front cover! 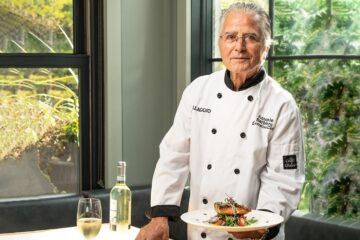 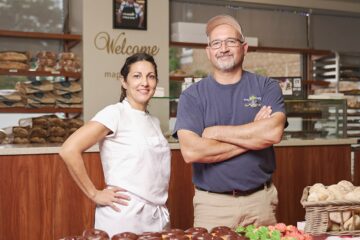 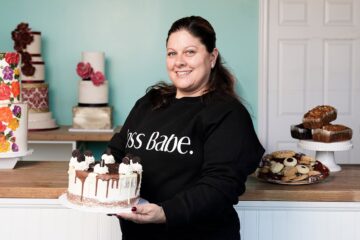 Oh so Sweet: A Bite of Pure Joy 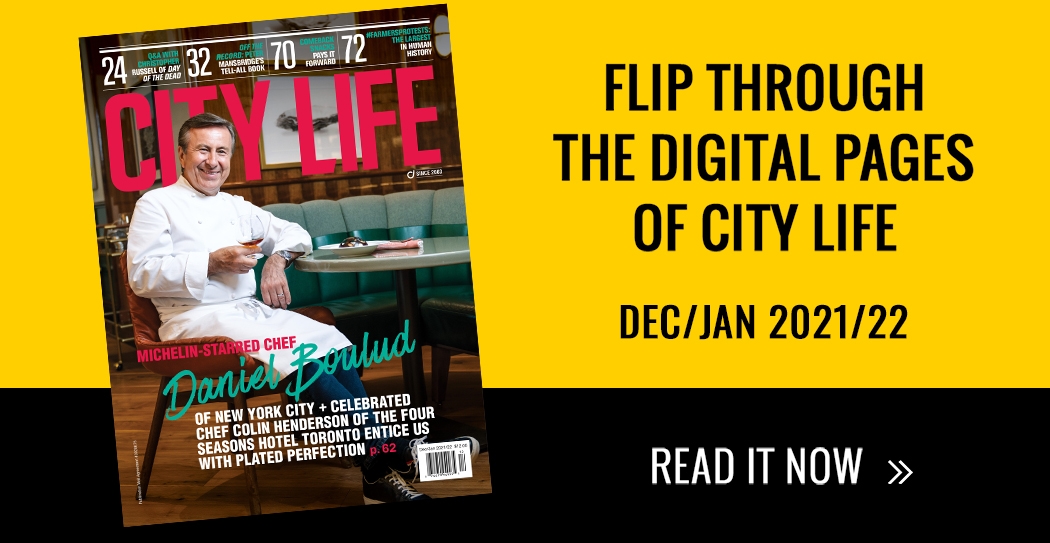