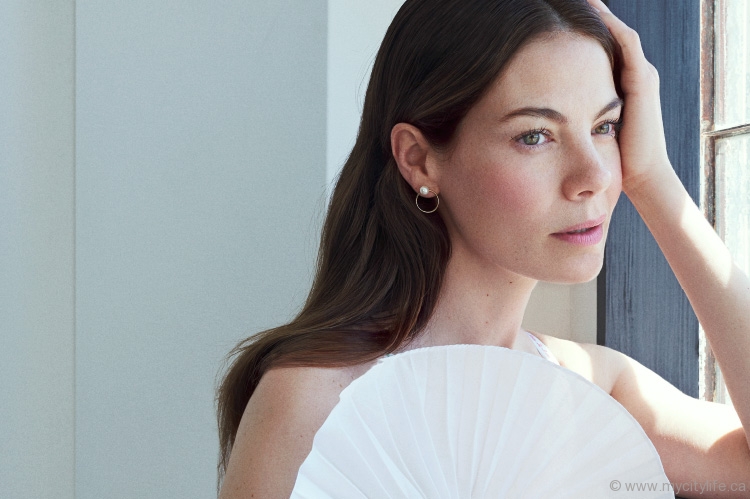 Michelle Monaghan may not have started out in the film industry, but she has certainly made her mark, acting alongside many of the big names in Hollywood. With no plans to slow down, she sat down to talk about her life in the industry.

Michelle Monaghan is the kind of woman who any person worth their salt would love to call “friend.” Born in small-town Winthrop, Iowa, Monaghan, 42, is a former blue-ribbon hog wrestler who loves to arm-wrestle at family gatherings.

A Renaissance woman from the get-go, Monaghan originally studied journalism at Colombia College Chicago, dropping out one semester before graduating. A subsequent move to New York opened up a successful career in fashion modelling for Monaghan, who sashayed down the stylishly elite catwalks of Milan, Singapore, Tokyo and the United States. It was an interim step for her on the way to becoming a multi-nominated actress. “Having spent years modelling, I definitely felt comfortable with the camera,” Monaghan says. “I understood what it meant to create a persona and convey a feeling or a story, albeit in a different way. Little did I know, it was grooming me for what ultimately would be my passion. The industry also gave me a really thick skin,” she says. “After so many modelling castings, by the time I started auditioning for roles, the process of not getting a job was more the norm than actually getting one. It rolled off my back, and I just kept going.”

Invested in upholding a positive attitude in tough vulnerable moments, Monaghan does not consider “no” a failure. In fact, it is her continued perseverance throughout that buoys her up at auditions and helps to keep things in perspective. In her early acting days, if Monaghan felt the material was beyond her capacity, she would do her best and focus instead on making a personal or memorable connection with the casting director. “That, in turn, would hopefully allow me the opportunity to be invited back for material that was better suited for me. It’s been all about celebrating the baby steps,” she says.

Monaghan’s small screen roles began with a guest spot on Young Americans (2000), followed by Law & Order: Special Victims Unit (2001), then a recurring role on Boston Public in 2002. By 2014, she was part of the starring cast (along with Matthew McConaughey and Woody Harrelson) in the first season of the critically acclaimed HBO series True Detective. “It was a wildly intense and creative bunch and demanding as hell,” Monaghan says. “Everyone gave it their all. That’s when magic happens.”

Monaghan is also strongly vested in her role on The Path, an American web television series (2016–18) that looks at spirituality and religion — or the lack thereof — and how it intimately affects families and relationships. “Religion is a universal theme. People either identify with it or they don’t,” Monaghan says. “Jessica Goldberg, the creator, has honestly and acutely examined what it’s like for believers to have a crisis of faith, or what followers are willing to do or sacrifice in the name of religion, whether it’s for the better or the worst. Faith is inherently personal and provocative, and in being so, it has allowed us a rich and complicated story to tell.”

The 2001 movie Perfume was the start of Monaghan’s big screen casting, which was quickly followed by a supporting role in the movie Unfaithful (2002), starring Richard Gere and Diane Lane. Director Shane Black’s movie Kiss Kiss Bang Bang (2005) was Monaghan’s breakout film, where she starred opposite Robert Downey Jr. and Val Kilmer. High-profile successes quickly followed, with a co-starring role in The Heartbreak Kid (2007) with Ben Stiller and Gone Baby Gone (2007) with Casey Affleck. Always up for an adventure, Monaghan learned to drive an 18-wheeler, double-clutch rig for her role as Diane Ford in Trucker, for which she won a Best Actress Award from the San Diego Film Critics Society in 2009. Monaghan’s characters in The Best of Me, Mission: Impossible III and Source Code, with Jake Gyllenhaal, were all movies that continued to captivate audiences and established Monaghan as a Hollywood dynamo.

The list of leading men that Monaghan has worked with represent a who’s who of Hollywood, including: Robert Downey Jr., Tom Cruise, Hugh Dancy, Matthew McConaughey, Jamie Foxx, Aaron Paul, Chris Evans, Jake Gyllenhaal and Patrick Dempsey, to name a few. The list of stellar actresses is just as impressive. “I love and respect Frances McDormand profoundly, personally and professionally,” Monaghan says. “Charlize Theron is another favourite. Her commitment to character is the real deal, not to mention she’s a total badass. I’d go to the ends of the earth for Malin Åkerman. She and I have been best friends since we made The Heartbreak Kid together,” she says. “Alfre Woodard is the salt of the earth — powerful, poised and funny as hell. There are so many women whom I respect and admire — the list is very long.”

As far as actresses with whom Monaghan would like to work, Viola Davis is at the top of her list.

“Viola Davis is something else; I just want to breathe the same air as her,” Monaghan says. “I also appreciate the enormous talent of Naomi Watts and very much respect her choices. I have a pretty major girl crush on Kathryn Hahn, as well. I embarrassingly remind her of it every time I see her. Meeting Gena Rowlands is a dream of mine. I’d definitely embarrass myself in front of her.”

“I understood what it meant to create a persona and convey a feeling or a story, albeit in a different way. Little did I know, it was grooming me for what ultimately would be my passion”

Proficient and successful on both the big and small screens, Monaghan enjoys each medium for its definitive creative opportunities and challenges. With film, the story usually has a beginning, a middle and an end, allowing Monaghan to create the emotional arch of a character, with a conclusion that satiates viewers. With television, however, the storyline might not be shared with the actresses and actors, which prompts, for Monaghan, measured choices and more of a layering technique when developing characters.

In spite of her hectic work and travelling schedule, Monaghan makes sure that her husband, Peter White, whom she married in 2005, and her children, Willow Katherine, 9, and Tommy Francis, 4, spend personal time together as a family, albeit quality over quantity. “I spend a lot of time travelling, so it’s important that I maximize my time with the kids,” Monaghan says. “Sometimes it’s a quick boogie before school, which my son loves. Sometimes my daughter and I just snuggle up at nighttime and read together. They’re simple things, but they require me to put the phone down and be present, which I know is a constant struggle for a lot of us,” she says. “My husband and I also stick to a pretty tight routine, so we can enjoy our time together, independent of the kiddos. And thank goodness for FaceTime. It’s been a saviour.”

To stay centred, healthy and naturally beautiful, Monaghan ascribes to the balance, balance, balance theory. A “foodie” who loves experiencing new restaurants and taking great pleasure in cooking and sharing, Monaghan does not deny herself anything, an approach that keeps her happy. “Because I’m a bit of a foodie, I try to squeeze in a daily workout, whether it’s a hike, a jog or a spin class. It’s not always manageable, but when I do, I feel my best. I love being outdoors. I also drink three litres of water a day; it does wonders for my skin,” she says. “I’m fortunate to be surrounded by fun-loving people in my life. Being a bit of a rascal keeps me young.”

Social causes such as #TimesUp, #MeToo and #MindTheGap are important causes that Monaghan is honoured to support; in fact, she considers them a necessity. “Times are changing, the shift is happening, which is simply because people are listening, becoming more aware of the issues and understanding their accountability,” Monaghan says. “These movements are collective, and they don’t happen overnight. But if we can appreciate that each of us can make a difference, the impact will be lasting. I’m also incredibly grateful for all the candid conversations I’ve had with men and women this past year. People are being vulnerable and sharing, and it’s humbling and empowering,” she says.

“There’s a silver lining in everything, as they say. I do believe things will be different for our children, and that gives me great solace.”

So what’s next for this popular star who loves more than anything to play tough female characters who fire on all four, six or eight cylinders? Live theatre is definitely an option, the ultimate creative dream for Monaghan, one that she says she is manifesting in real time. “I’m in constant awe of a stage actor’s commitment, stamina and heart. I find it to be one of the most moving and authentic experiences. I always leave the theatre feeling inspired and with a lump in my throat.”

Not bad for a small-town Iowan who’s never had a cavity, can drive a big rig and speaks Japanese.