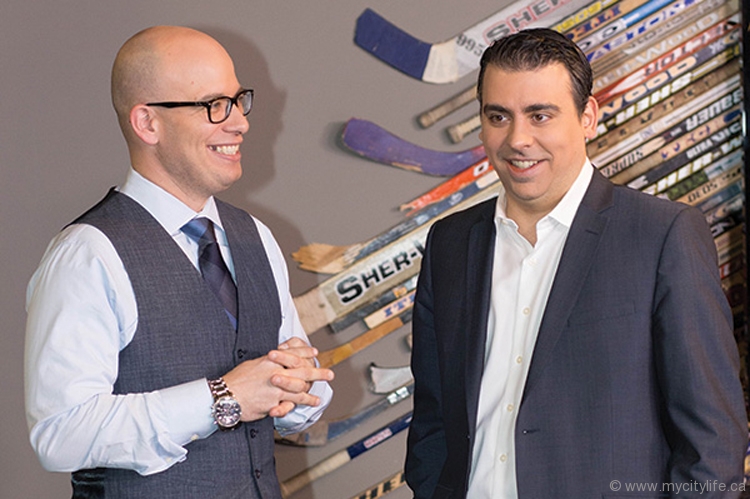 Sid Seixeiro isn’t too happy with Environment Canada. The radio sportscaster is giving it to the government’s weather watchdog for a not-so-prompt heads-up about the snowstorm that hit Toronto over the weekend. “I would like to thank the guys who waited for the end of the Chelsea game to throw out a weather warning for southern Ontario,” he says sarcastically. In the Sportsnet 590’s control room, the production team chuckles at this latest on-air rant, one more part of Seixeiro’s ongoing beef with Environment Canada. Tim Micallef remarks that he’s always fascinated about what sets off his co-host before tossing in that Boston Bruins’ enforcer Shawn Thornton just announced he would appeal his 15-game suspension.

It’s a strange diversion, but it’s business as usual for Micallef and Seixeiro, co-hosts of Sportsnet 590 The Fan’s Tim and Sid. “The best thing while doing this show is you don’t know what’s going to happen,” says Seixeiro, as he and Micallef sit in a boardroom down the hall from the Sportsnet 590 studio. Unlike mainstream roundtables, their three-hour afternoon program is far more off the cuff and outside the box. One minute their calling Dana White’s rash condemnation of George St. Pierre after UFC 167 “garbage” and “bush league,” the next they’re belting out a rendition of R. Kelly’s “I Believe I Can Fly” with lyrics paying homage to Toronto Raptors head coach Dwane Casey’s comment that he “believes in Masai.” It’s an unconventional formula, but it’s carved out a niche in a saturated industry where straight-faced analysis is the norm. “I couldn’t do a show that was that structured,” Seixeiro adds. “I can’t, because it’s not interesting to me. There has to be a level of organicness with a show. There has to be, or I’ll get bored.”

This unapologetic but self-critiquing approach is part of what their loyal following of “Tim and Sidizens” find so appealing. Micallef and Seixeiro ride with the vanguard of modern sportscasters, never spoon-feeding listeners, and mixing hard-hitting discussion with locker-room banter, much of it self-deprecating, unabashed humour and obscure pop-culture references (plenty of Will Ferrell here). To top it off, they’re voracious sports consumers. “I just hated everything else in life,” says Seixeiro about his affinity for athletics in his youth. “I wasn’t interested in anything else. Maybe storm chasing.” (Twister, as it turns out, is his favourite movie. “I saw it twice on opening weekend. That’s a true story. Unfortunately, all true.”)

They wield contrasting styles to balance cold, hard statistics with fiery, unrepentant judgment. Seixeiro, opinionated, unapologetic, is never at a loss for words — “I am pig-headed,” he says, “but that’s not an act. I’m genuinely a pig-headed individual.” Micallef, more objective, is calculated and collected. “I’ll constantly evolve on a topic to where you might see me flip. Some people might think that’s soft; I think that’s evolving,” he explains. It makes for a loose and edgy show, but one that remains pertinent and perceptive, informative and entertaining.

Micallef and Seixeiro found this chemistry early in their careers while working for the former independent sports channel The Score. They started as interns in late 1997 before climbing the ranks and finding an audience-appealing rhythm when they periodically filled in for Greg Sansone and Martine Gaillard on The Score Tonight. It was a crazy time, those fledgling days. The underdog network operated with a razor-thin budget, and luxuries, like prompters, were fantasies. Sometimes a news column would just be handed to them and they would have to quickly locate the relevant information and give their own spin. “We’d do these day shifts and you’d go on with your notes, and that was it,” says Micallef. “Oh, it was sink or swim,” agrees Seixeiro.

But it was also those strenuous times that honed their skills and rapport. Today, explains Micallef, their producer can walk in with a breaking story and they’ll have no problem engaging with it right then and there. “Some other people would be like, ‘Save it for the break.’ No, no, no. Walk it in, we’ll roll with it,” he says. The Score was also where they found their shared penchant for entertainment. During television broadcasts it wasn’t uncommon for Micallef and Seixeiro to venture off on tangents, bouncing jokes off each other, following whatever detour the other would take. They’d flip to a scoreboard where 10 seconds was allotted, but they’d ramble on for three times that long. “Oh, I would talk a lot,” chuckles Seixeiro. “You’d really know what the score was in Utah-Golden State.” Despite the producer screaming in their ears, they’d carry on; maybe touch on a point about The Fresh Prince of Bel-Air. “It’s not as tough a transition as you’d think,” Seixeiro adds.

It was lax, maybe even reckless, but that was all part of the appeal. From 2009 to 2011, Micallef explains, their Tim and Sid: Uncut podcast was the top sports podcast in Canada. It’s also, arguably, an attitude that’s needed. Technology has rendered traditional sportscasting stale. Fans can access all the scores, stats and breaking news online, and they’re more knowledgeable than ever before. Sportscasters must not only know all the ins and outs — “because people will call you out on everything,” Seixeiro explains — but also bring more to the table. They must “give [audiences] something they can’t get on the Internet,” Seixeiro adds. Such as their cheeky farewell to Andrea Bargnani after the much-hated Raptor was traded to the New York Knicks — all to the tune of the Andrea Bocelli and Sarah Brightman classic “Time to Say Goodbye.”

It’s these antics that keep listeners coming back for more, but “if I could be honest about it, part of it is entertaining me as well,” says Seixeiro.

“Our point was, if we’re entertaining us and giving information, isn’t that the point of the show?” adds Micallef.

In December 2013, Micallef and Seixeiro celebrated their two-year anniversary with Sportsnet, the multi-platform sports giant of Rogers Media. It was a difficult decision to leave The Score, the station they helped build. But Rogers has made aggressive moves, such as securing a 12-year $5.2-billion deal for the NHL’s Canadian broadcasting rights, to solidify itself as a premier sports provider. Micallef explains he felt they accomplished everything they could at The Score; it was time to take their talents to the big leagues. “When we got here and we kind of hit [it off], it was just proof that all those things were true and that we could compete at the very highest level. And succeed at a very high level,” says Micallef.

Seixeiro concurs: “Underline what he just said. That’s what I would have loved to have said, but didn’t.”