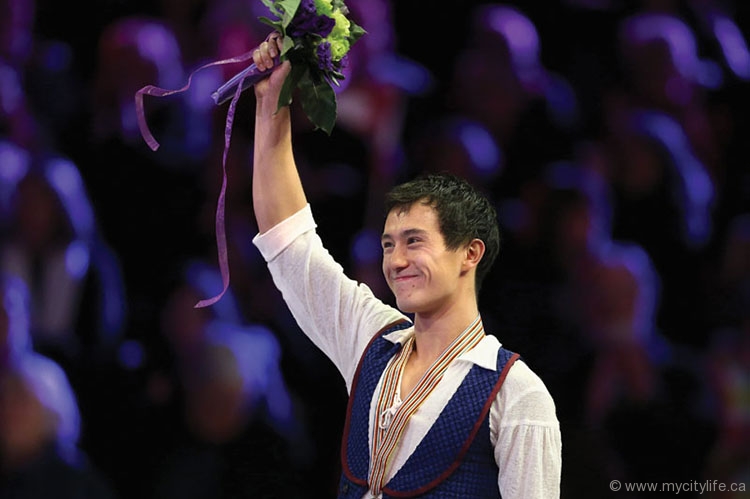 Three-time world champion Patrick Chan keeps his head high and his focus steady. After all, this latest win (his third consecutive World Championship title) brings him one step closer to the 2014 Winter Olympics in Sochi, Russia, and he’s got his eye on the gold.

Chan leads a hectic life, flying back and forth between competitions, and to his hometown in Toronto and Detroit, where he recently moved to train at the Detroit Skating Club, along with other competitors, for the World Championships in London. I catch up with him on the phone as he waits for a flight out of Toronto’s Pearson International Airport, and he tells me how he came to the sport he believes is a great way to express yourself.

A native of Ottawa, Chan moved to Toronto at a young age and took up the sport of figure skating on the recommendation of a hockey coach who told him he should learn how to skate well before he started to play hockey. “I just got better and better really quickly and then just went ahead and stayed in figure skating.” Luckily for him, he also had a lot of support from friends and family growing up, making for a positive environment that was integral to keeping him motivated on the rink. “[They were] always really supportive of me, and so [were] my fellow students and especially my friends. They never alienated me because of what sport I did, they just really admired the fact that I was a really good athlete,” says Chan, who attended North York’s École secondaire Étienne-Brûlé. “I don’t know if I would have kept on skating if I was ever bullied. It would have really discouraged me and then I wouldn’t have had the confidence just to skate,” he adds.

As for what keeps him driven going into the Sochi Winter Olympics, it’s the excitement of having the opportunity to bring the Olympic champion title in men’s singles figure skating home to Canada for the first time. “A first time for Canada is great because I think it just puts us on the map even more — it puts Canadian figure skating on the map,” he says. “Some of the best skaters are developed in Canada … I would be just doing my part of giving back to figure skating in Canada.”

Paying it forward while challenging himself to be better are two traits Chan may have picked up from his figure skating role model, Kurt Browning. “Every year he’s a different skater. He really is forward-thinking and always wants to change the way he skates … but not only is he a great skater, he’s also a really, really good person off the ice, and he’s always been a really nice guy to me ever since I met him.” With three consecutive World Championships under his belt, parallels between Chan and Browning can certainly be drawn, but next year, Chan has the opportunity to do something Browning never did — bring home the Olympic gold.

Looking back at his last Olympic appearance in Vancouver, where the expectations for competing in your home country were high, Chan thinks that the pressure will be slightly alleviated in Sochi. He also knows that the past three years will help him to be a better competitor.

“I’m now a three-time world champion going into the Olympics,” he says, and admits that his third World Championship in London “was a good experience because it felt a lot like Vancouver. I think [it was] even more of a pressure-filled situation because I was a two-time World Champion trying to go ahead and win my third and I really wanted to do it, and I wanted to do it in front of my home country above all.” He values the experience even more so because, he says, it is “very similar [to the] pressure I’m going to be facing in Sochi.”

It’s this experience with pressure that makes Chan confident in his ability to bring home the gold. “I’m very confident that this is my opportunity. I don’t think there’s any other better opportunity than now … so that’s definitely my goal.”

As for his advice to aspiring figure skaters? “Go in with an open mind and try it out, and above all … do it for yourself and because you want to have fun.”