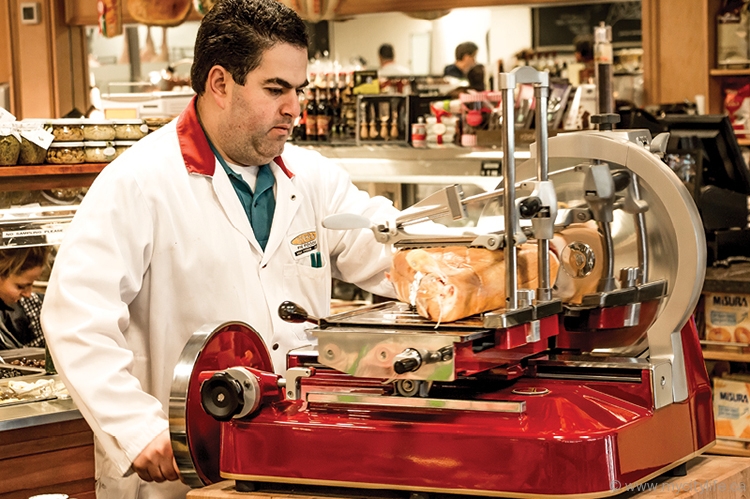 Welcome to a new era of shopping in Canada: the decline of the department store, and the rise of the “makers”

Canada, you’re so hip. For the past few years, our home and native land has experienced a major shift in consumerism: shoppers are abandoning the big-box stores, with their migraine-inducing fluorescent lights and impossible mazes of product-stuffed aisles, and instead are beelining for the real professionals — the independent shop owners, the artisans, the craftsmen and women — when they want to checkmark their shopping lists. When Christina the Consumer is on the hunt for a decent pair of shoes to wear to next weekend’s wedding, some meat for tonight’s dinner and some fine-grind coffee, she’s not going to head to Aisles Three, Twelve and Twenty in her local Walmart. Not anymore. According to this recent shift, Christina would rather pay a visit to her local shoemaker, butcher and micro coffee shop owner — artisans who, until now, were nearly forgotten by consumers.

It’s a trend that bubbled up in Canada’s downtowns and has spent the past few years slowly trickling up to suburbia. What originated as urban style-makers flocking to local indie shops for the sake of maintaining individuality, and for the sake of straying from the “one size fits all” mentality of department stores, has exploded into a revolution that’s redefining the country’s definition of shopping.

This movement is multi-dimensional, meaning there’s more than one reason why we’re betraying the mega-marts we’ve come to hold so dear. Firstly, consumers aren’t just consuming anymore; they’re conversing. They’re asking questions. They’re laughing, shaking hands and swapping stories with shop owners. Transactions aren’t just an exchange of product and cash anymore, but an exchange of real advice and good ol’ neighbourly chit-chat. This next generation of shoppers craves what’s been missing in their department store shopping experience for the past few decades: genuine human interaction. They also miss the expertise. No offense to the kid working at the Costco deli, but he’s not going to be half as knowledgeable, or as passionate, as the owner of that little butcher shop down the street that’s been there forever.

These reasons, plus the plain desire for good-quality stuff, have made today’s buyer ready and willing to sacrifice the slashed prices and convenience that come with the big-box shop. Welcome to the rise of the makers; the decline of the department store. David and Goliath: Part Two.
“A few years ago, independent shops were disappearing. Big-box retailers came in and just wiped out these smaller businesses that had survived and thrived for years. They couldn’t compete,” says Sean O’Shea, Global News’s investigative and consumerism reporter. “But now those specialized stores are growing in importance again. More and more consumers want something different, and to deal with someone who actually specializes in that product, and they’re willing to pay more for that reason.”

Now that more and more Canadians are falling hard for local artisans and their offerings, the retail giants that consume so many square kilometres of our municipalities are in hot water. After the 2012 mass downsizing of Rona, 2014 saw Sears eliminate over 200 of its locations, and in the wee weeks of 2015, Mexx closed its doors and Target evacuated Canuck territory (after less than two years selling on our soil). Jacob, Reitmans, Best Buy, Chapters Indigo and Le Château are also rumoured to be terminal, all having made substantial cutbacks in the past few years.

Of course, the Little Indie Shop that Could isn’t the only one that’s got the big-box store in a chokehold. It’s had some help from the fact that most department stores are competing in the same sphere, trying to appeal to the same people, and eventually beating each other out of the market. There’s also online retail, a newcomer to the shopping scene that’s been snuffing out brick-and-mortar stores for years, because why would Shawn the Shopper trek all the way out to the shop when he can simply “click, click, buy” his way to success from the comfort of his own home?
“Technology has been hugely disruptive in the big-box market,” says Tima Bansal, executive director of Network for Business Sustainability and professor of general management at Western University’s Ivey Business School. Bansal also claims that while the innovation of online shopping has played a huge role in the sinking of the retail chain, it shouldn’t pose a danger to the independent boutiques — not if they find their niche. And for these local shops, their niche could simply mean their neighbourhood. By attracting consumers who live nearby, independent producers may never even have to cross paths with e-commerce, since foot traffic is their main source of profit.

Consumers are also increasingly excited about the fact that by buying local, they’re automatically reducing their environmental footprint. Rather than finding the perfect pair of headphones on the web, which could involve thousands of kilometres of eco-unfriendly transport, they’re walking or biking to their local audio specialty shop. For most independent retailers, production and consumption happen in the same place. Shopping local promotes that, and in turn makes it easier for these retailers to operate within the natural resource limit. Green Panthers, rejoice.

Bansal explains that there are three key elements to sustainability: environmental, economic and social. Environmentally, indie shops are much kinder to the Earth. Economically, they’re keeping things local, helping to create a self-sustaining society for sellers and buyers. And socially, well, they’re giving Canadians one more reason to be all nice and neighbourly with each other.

“I think that Canadians, by nature, value the social aspect of shopping,” she says. “They want to have a story behind the product. Now products aren’t just goods, they’re actual pieces of our identity. We want to know where
our purchases came from. We want those stories.”

According to O’Shea, we’re also open-minded. Having worked on retail stories in both the States and Canada, he can say that our neighbours to the south tend to focus more on quantity, while we northerners focus on quality.

“More and more people are saying, ‘You know what? I’m prepared to have less, but what I do buy I want to be better quality,’” says O’Shea. “So maybe I’ll have eight pairs of shoes instead of fifteen, but I want those eight pairs to be of good value and to be different from what I find everywhere else.”
With this shift in consumerism, Canadians are also experiencing the breath of fresh air that is the “less is more” spending mentality. When we peruse the boutique of a local producer, we take our time, savouring their more limited offerings. The more we invest in the higher-quality products found at independent shops, the less likely we will be to binge-shop at the mega retailers. It’s a big step in the direction of a more minimalistic way of life, something that many North Americans crave. Our closets will be slimmer
but richer, our homes will be less cluttered and to the point, and we’ll be living with and in products that are beautiful and trustworthy.

Not to say that we Canucks are suddenly perfect purchasers. We, too, still carry a few too many shopping bags at a time, and of course the big-box store is still a destination for most of us. But in light of this new change in the tide, Canadians are at least beginning to realize that while we can trust Walmart for some of the things on our lists, we may not want to always throw our money at its cheap, foreign-made products — especially not when it’s something we want to last.

“We’re always reading about recalls on products and quality issues with respect to products made in China, and that’s resonating with people
more and more,” says O’Shea. “While not every buyer is the same, and we all come from different places financially, if they can buy something that’s locally produced, that’s homegrown, that will last them longer and serve their needs better, that’s something they’ll consider buying.”

Our country is already recognized as a world leader in ethical consumerism. Let’s keep that ignited by elevating our makers to, as Bansal says, create a more sustainable, and thus resilient country. And when the rest of the world decides this old-fashioned way of shopping is a trend they want to try on too, we’ll be there to say we were spending uniquely before it was cool.