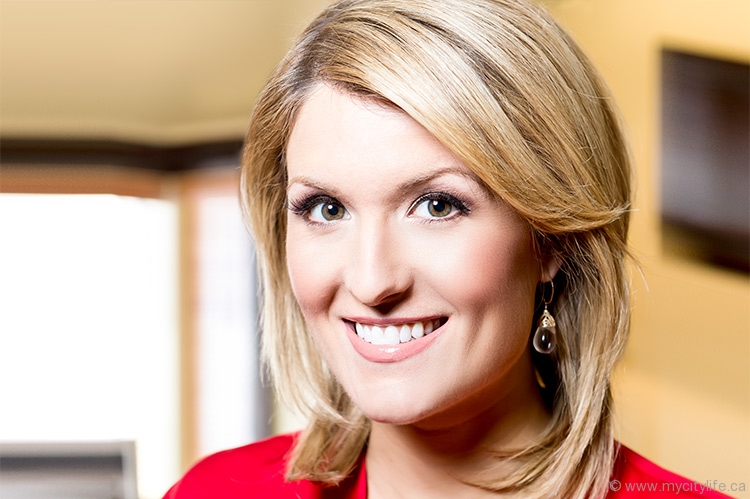 The minute Michelle Dubé wakes up in the morning she turns on the news. As she gets ready, CP24 plays in the background; while eating breakfast, she flips through the newspaper. In the car heading to work, she tunes into Newstalk 1010, so that by the time she arrives at the CTV studio she’s already got a firm grasp on what’s happening in the city. “Once you get to work, you hit the ground running,” she says. And as the co-anchor of CTV News Toronto knows, the news doesn’t wait for anyone. You must live and breathe it.

For most of her life, Dubé has done just that: live and breathe news. That dedication has fuelled her rise to the co-anchor chair of CTV News at Noon and Six — a seat she’s held for the past two and a half years. While earning this position is notable in and of itself, it’s the rate at which Dubé achieved it that is most impressive. In five years, she’s scaled the ranks like a speed climber, vaulting from a reporting gig at CHCH Hamilton fresh out of post-secondary to co-anchoring Canada’s No. 1 local newscast. Most reporters spend years in the field before they get a shot at the Big Desk — if that shot ever comes. Dubé has done it in half a decade. “I still pinch myself,” she says. “I am 30 years old and I’m living my dream.”

She’s curled up on the snug, ivory-white couch of her Davisville home dressed in blue jeans and an electric crimson blouse. A deceiving sun floods the living room of her modest two-storey, distracting from the frigid temperatures outside and igniting her shoulder-length, sandy blond hair in a striking warm glow. She’s tall and lean like a seasoned runner, and addresses you in a confident and friendly manner, as if she’s known you for years.

While Dubé’s rapid ascent may seem unusual and sudden, a twist of fate perhaps, it’s far more orchestrated than that. She explains she was lucky enough to know early in life that journalism was what she wanted to do, with signs appearing as early as elementary school. She was that kid that absolutely loved presenting in front of the class, and if you rummaged around her parents’ Hamilton home, you might come across some VHS tapes of a pint-sized Dubé and her cousin sitting behind a box-turned-anchor-desk reading pretend news.

She loves to write and when she attended Georges P. Vanier high school she researched careers that married writing with presenting. She found journalism and immediately began laying the groundwork for a future in the field. She took any opportunity for public speaking and even joined the school play, Après Notre Petit Verre. She also volunteered at the local television station, Cable 14; answering phones, wrapping cables — nothing glamorous. But it was a taste of the news world — and she liked it.

When she was accepted into a concurrent program between the University of Western Ontario and Fanshawe College, she took off out of the gate, doing everything to distinguish herself from the pack. If her journalism teachers asked for two stories, she’d deliver three. She was the first person to arrive in the morning and the last to leave at night. “I really wanted to make a point to my profs that I wanted this more than anyone,” she says. And they noticed.

“We’d kick her out of here a lot of nights. She’d be sitting at a computer right beside my office and I’d just sometimes have to say, ‘Michelle, go home. Really, you’ve done enough,’” chuckles Jim Van Horne, program coordinator of broadcast journalism at Fanshawe. “She just wouldn’t let an opportunity to improve go.”

In her free time, she worked at a local radio station, AM980, getting up at 3 a.m. to do traffic and weather before school. When a classmate told her about a friend who started a company that created customized music for bowling alleys in the U.S., she saw another opportunity. “I would be in Texarkana, Arkansas: ‘Hey kids, we’re live at The Beat,’” she says of her DJing gig at the Bowling Music Network, which was aired in 30 different states. “It was totally embarrassing, but it was broadcasting experience, and I was paid. Not much albeit, but still.”

Before a diploma was in her hand, her resumé was already packed with several years of field experience, and Dubé had several job offers even before graduation. She opted for a reporting position with the CHCH News team in Hamilton in 2007 and was live on the air on her second day. When CHCH ran into turbulent times in 2008, and veteran anchors Connie Smith and Dan McLean left, Dubé, at 24, was given co-anchor duties alongside Nick Dixon. But Dubé wanted more.

She had her eye on Toronto and wanted to take her career to the big city. She made contacts at CTV and, in April 2009, was offered a one-year contract reporting on evenings and weekends to cover a maternity leave. For many, it would be a step backwards — leaving the prime position of anchor to go back into the field wasn’t progress. But Dubé saw the bigger picture.

At CTV, she began reporting on everything from the G20 summit to elections, even interviewing Oprah Winfrey. “It was a calibre of reporting that I’d never thought I’d get to experience,” she says. “Because it’s not that I’m interested in one type of reporting. I just love it all. I love the variety of it.” Soon she was filling in on the anchor desk, and when Christine Bentley announced she was leaving her position as co-anchor of CTV News in September 2012, eyes shifted to Dubé. She was tapped to take the chair beside Ken Shaw.

Shaw couldn’t have been more delighted with the choice. Despite her age, Dubé had already showed immense potential, and her genuinely positive energy resonated with all those she worked with. Her old-school dedication to journalistic ethics and fairness were qualities Shaw appreciated. “She doesn’t do anything in a haphazard manner,” explains Shaw, who’s been part of the CTV Toronto news team since 1979. “She wants to have it correct from the get-go, and I think that’s a laudable attitude.”

After earning the co-anchor job, Dubé never looked back. The CTV News Toronto program has been nominated for a Canadian Screen Award for best local newscast, and Dubé and Shaw have also been nominated for best anchor team. She explains that she loves how every day is an adventure. “I really get excited about telling people, ‘Hey, this happened today. This is new. You need to know about this,’” says Dubé, who, in 2013, received a Canada’s Most Powerful Women Top 100 Award from the Women’s Executive Network. “And I love how spontaneous it can be.”

That spontaneity goes hand in hand with her curiosity. She finds cooking is a great way to unwind and enjoys experimenting with meals. She loves how the Davisville and Leaside neighbourhoods are ripe with specialty stores just a stone’s throw away and she’ll often walk around the corner to the local butcher, produce shop or fishmonger and shop “European style,” picking up food every couple of days as opposed to doing one big shop once a week. “I like to cook for what I feel,” she says. “So it’s nice that we live in a neighbourhood where we can just get home, walk around the corner and pick up some fresh stuff.”

But spontaneity comes in many forms, and Dubé’s life progresses at a relentless pace. It was only a year ago that she married her “best friend” and the couple is already moving to the next stage of life: Dubé is pregnant. She explains she’s four months along and hasn’t even broken the news to her audience yet. Her husband wants to keep the sex of the baby a surprise, which she’s agreed to do, despite wanting to know herself. But in the end, it doesn’t matter. “A healthy baby. That’s all I want.”

While Dubé also does plenty of charity work, such as with the YMCA, Cops for Cancer and the Toronto Challenge, she’s also passionate about getting youths interested in the news. “I want to get kids excited about what’s happening in their community, excited about getting informed,” she says. This past November, Van Horne invited Dubé back to Fanshawe to do an interview session in front of journalism students with Bob Hurst, the former president of CTV News and current Fanshawe teacher. Hurst threw Dubé some curveballs, grilling her about the personal sacrifice journalists must endure — the late nights, working weekends, missing holidays — suggesting that’s a tough message to sell to students. But Dubé handled it like a pro. “She turned it around on him,” says Van Horne. She drew attention to how much the business gives back, how those experiences allowed her to grow as both a journalist and a person. “I didn’t prep her for anything,” Van Horne says. “She came in and she hit on all the right notes.”

And why wouldn’t she? She’s been preparing for it all her life.

The Price of Progress