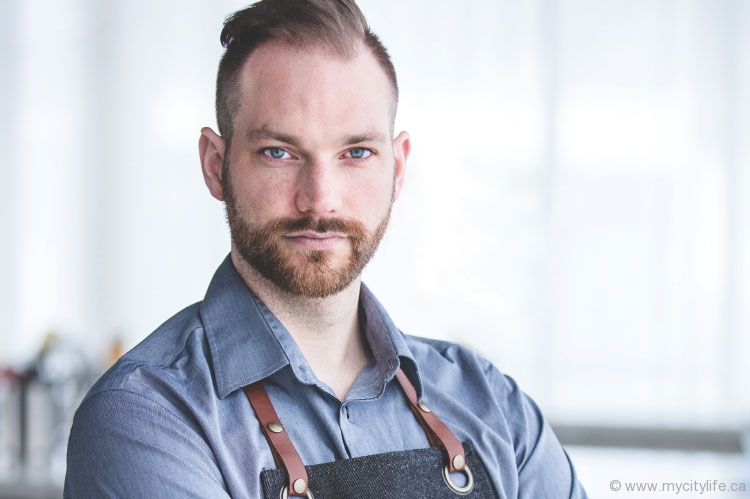 City Life: What sparked your passion for the kitchen?
Romain Avril: There’s no start when you wake up and you’re like, “You know what, I’m tired of this. I’m going to be a chef.” It was always part of me; I never had to think about it. So when you finish the intermediary classes in France, you get to pick a job for a week to see if you like it so that you have an idea of what you would do in the future. I decided to try the kitchen. I was 13. I was like, “Yep,” and at 14 years old I started cooking school.

CL: So you started with traditional French cuisine?
RA: Absolutely. Obviously in France they teach you all the classics of real French cooking, which I did pretty much in my career working in a Michelin-starred restaurant in the Relais & Châteaux hotel Domaine de la Bretesche. Then, when I was 21 years old, I passed my degree in Chinese and French culinary. So I moved to London in a Michelin two-star restaurant, and I think that was really where I found my craft — and that was a mix of French and Asian culinary.

CL: What is it that you love about the fusion of French and Asian cuisine?
RA: These are the two oldest cuisines, and to me the highest when it comes to the care, the passion and the meticulous details. French people always think French cuisine is the best, but to me adding the flavours from Asian cooking really boosts it. French cuisine is very good, but it’s really heavy. It’s really like one tone, and adding other flavours from another continent is just more life, more love in the food.

CL: You have now partnered with Monogram Canada as its new executive chef. What prompted this partnership?
RA: My brand, my restaurant and Monogram are one of a kind. They are people that are passionate about what they do and care about quality — just like me. I mean, the Monogram Canada appliances are just amazing and they’re almost better than what I have at work. This is a brand that is driven to give you the best home-cooking experience. I think Monogram is really a brand that represents not only luxury, because it is a luxurious brand, but more so the care given to details, the art.

CL: What role do good appliances play in the kitchen? Do you have a favourite?
RA: Modern cooking really involves a lot of slow cooking and preserving, so when Monogram showed me that you could have this kind of sous vide technology at home, I was just like, “This is it!” They literally complete the panel of what a modern chef needs. Monogram has the widest range of appliances, and it’s incredible that you could have all this technology at home.

CL: You’re known for your spectacular plating. Why is this detail so important to you?
RA: It has to taste good, it’s got to smell good and it especially has to look good. Because when you get the plate, the first thing you’re going to experience is how it looks. So before you even think about eating it I want you to already be excited. You’re going to look at it and think, “Oh wow … that looks fantastic, I want to eat it.” So now when you’re actually going to eat it you already are advanced to the taste, because you already have emotions starting. When you have it then, it tastes better because you have two of your senses already working. There are restaurants you go to because you’re hungry, and there are restaurants you come to as part of an adventure.

CL: Do you ever go online and check reviews?
RA: Unfortunately I do. Well, I think everyone has their own opinion, and some are fair, some are not. I have no problem with opinions, because we do what we do and we know we’re exposing ourselves. I’m a lot better than I used to be. I used to get really, really hurt by anything that would be said, right or wrong. [Now] if someone says, “You know what? Service was a little slow,” or, “That was good, but, you know what, I would have liked it that way,” I’m like, “Okay.” I can actually look at it, pick the critique out of it and then be like, “I’m going to take that and then use it to be better.” If people are really just attacking me, saying, “It’s horrible, it’s mediocre, this guy is this, this guy is that,” then I’m just looking at it and I’m laughing. It’s like every job. As soon as you’re exposed, people love to knock you down.

CL: Where do you see Toronto’s food scene heading?
RA: Actually, it was one of my fears when I moved here. A lot of people were asking me what the heck I was doing. I really just wanted a change. I was worried until the last few years. I was like, “I don’t think it’s going anywhere.” Casual food was really strong. But in the last two years I’ve noticed a complete turnover, with a lot of chefs moving from Europe, and a lot of chefs from Canada really coming together as a team. I think it’s the new generation, a generation that is focused on good food and great cooking, like molecular and modern. A really big food critic from France even came to Quebec last year, which made me go, “Okay, they’re starting to open an eye.” I really do believe Canada has some really talented chefs.

Instagram
Looking for something delicious to warm up with? C