The Art of Touching the Sky – Jonathan Wener 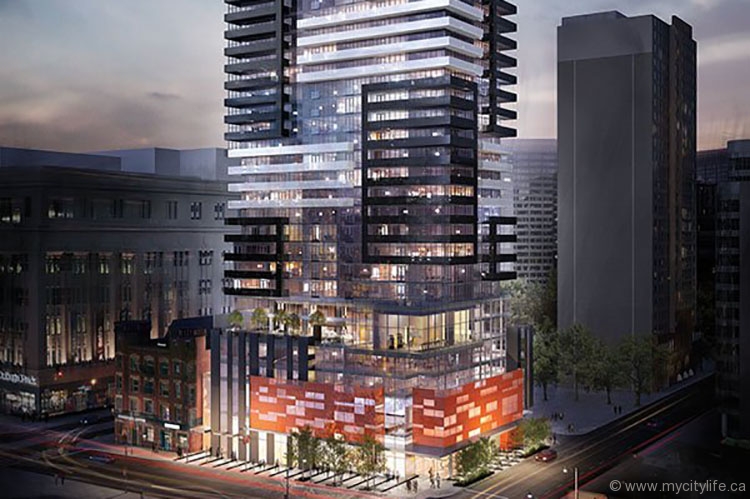 There’s a rainbow-hued collage hanging in the lobby of Canderel, one of the most influential real estate companies in the country, and I can’t stop looking at it. It’s not until I sit down for my interview with Jonathan Wener, Canderel’s founder and CEO, that I learn why the pictures are tinted with colour: that’s how he views his work — in multicolour.

“I was always very tactile building things, and when I started exercising that through art and design, and eventually construction, it gave me a sense of confidence,” says Wener, who was 25 when he founded Canderel in Montreal. The company’s first landmark project was a $9-million development; 34 years later, Canderel — which is now based out of five Canadian cities — plans to spend 2014 tackling over $1 billion in development.

Listening to Wener speak of his craft, I’m introduced to the secret beauty of the sticks and stones of construction. He brings me back to the beginning of his building days, when as a child he would make forts out of found materials in fields and junk yards. In his teenage years, a love affair with the arts put him in even deeper touch with his right brain as he designed stage sets for school productions. By the time he was in the process of bringing Canderel to life, Wener had donned a different way of looking at buildings and could see them through an artist’s eyes.

His zeal for the canvas is evident in YC Condos, one of Canderel’s latest endeavours. Set to open its 66 storeys to Toronto’s chicest residents in 2017, the development — which is named for its location by the Yonge-College intersection — is a spectacle even in its mere paper-and-ink form. With a contemporary black-and-white exterior reminiscent of Picasso’s cubism and an elegant, four star-worthy interior, YC Condos stands as proof that Wener selects his talent the way an artist selects paint-splattered tools.

“I had a professor who said to me, ‘Machines depreciate; people appreciate. Invest in people.’ And that’s all I’ve done in my community life, and in my business life: invest in the right teams, build up the right people. And it’s worked,” says Wener, who on May 8 will be heading the 25th annual Canderel Corporate Challenge in Montreal, his charitable run that has raised over $8.5 million for cancer research.

One such investment was Burdifilek, a Toronto-based interior design firm headed by Diego Burdi and Paul Filek. The duo has made their mark on the international design landscape, having created spaces for iconic brands in Canada and the U.S. Now, they’re tacking YC Condos’ magnetic style to their wall of accomplishments.
“This project is drawing in a more sophisticated, design-aware clientele. We wanted to create a language that spoke to that, and came up with a very contemporary feel to the place,” says Burdi. “Jonathan Wener really created an amazing canvas for us to paint on.”

By adding the architectural genius of Graziani + Corazza Architects Inc. to the mix, Wener has drafted up a residential building that’s dressed to the nines. But, he tells me, YC Condos is more than a pretty face. With a $5-million infinity pool, the Aqua66, being placed on the penthouse floor, the development also stands as a token of Canderel’s integrity.

“We really challenged Burdifilek to create something unique for our residents, and they came up with this incredible feature for the penthouse space,” says Wener. “Normally the top of the building would be reserved for very expensive penthouses, but we gave that up to build something for the whole YC community.”
YC Condos is set to rise in the same neighbourhood as Canderel’s College Park Condominiums, a trio of luxury developments framing the popular Toronto square where the city’s trendiest flock to work and play.

“I’m not a religious or a superstitious person, but I will say that we’ve had a lot of good karma in the area of College Park,” Wener tells me of the series, which includes Aura, a 78-storey residence — the tallest in Canada — to be completed this year. It’s a family of first-class residences that promise to set Canderel, literally, above the rest. “The creative component is what I enjoy the most in developing these projects,” says Wener. “I’m not worried about making the last dollar on projects. Sure, we’re driven by profit and economics, but I’m equally driven by leaving behind signature developments. I will not let go of design excellence.”

If the Walls Could Talk

From Manhattan, With Love

The Art of Touching the Sky – Jonathan Wener