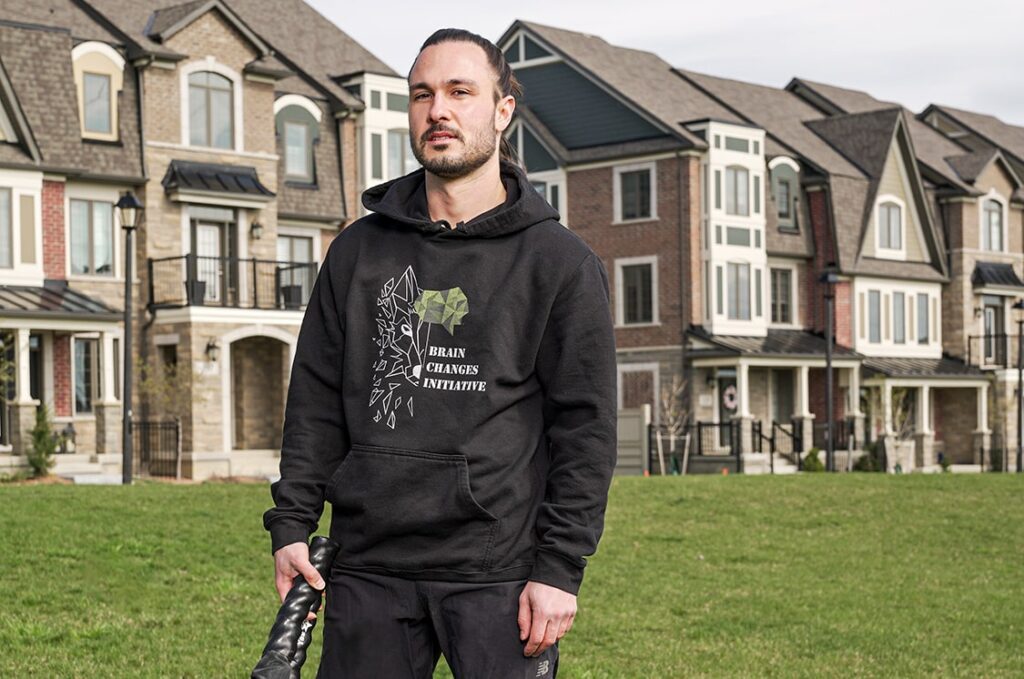 A med school student at the time of a terrifying car accident, Galati couldn’t even talk when he woke up from a coma. But he kept his eye on the prize, and it’s Dr. Galati now | Photo By Carlos A. Pinto 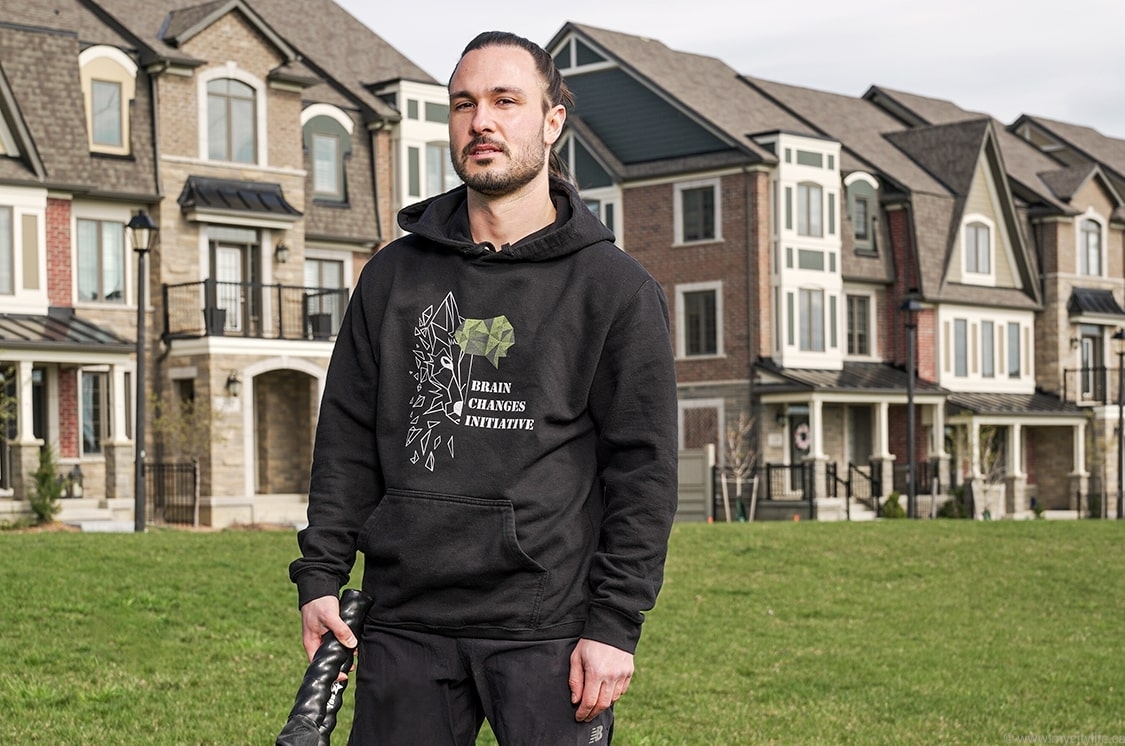 Everyone has their journey, but sometimes what happens in a split second means we have to carve out a new path through unknown territory. That is exactly what happened to Dr. Matthew Galati, the founder of Brain Changes Initiative. A life-threatening accident that left him with a traumatic brain injury forced him to help himself, and now he’s leading others on the road to recovery.

As a young medical student, Matthew Galati did what thousands of other students do during the school year: He went home to Toronto to visit his friends and family for the weekend and was going to drive back to campus on Sunday night. But a huge snowstorm stopped him, and he decided to leave the next morning, hoping the weather would be better. It wasn’t.

In the early morning of Jan. 28, 2013, he headed back to the Schulich School of Medicine & Dentistry satellite campus in Windsor, Ont., driving westbound on Highway 401 with a friend as a passenger in his car. The police were detouring cars off the highway in Woodstock, Ont., and that is where Galati hit black ice. His car spun out of control and hit a tree.

Galati was knocked unconscious with brain trauma, multiple skull fractures, broken ribs, collapsed lungs and a severed nerve in his face. Because Galati’s side of the car absorbed the impact, his passenger was able to get out and call an ambulance. He was rushed to the nearest hospital in Woodstock where he lay in a coma for three days. When he awoke, he was diagnosed with traumatic brain injury (TBI). He couldn’t walk, and he couldn’t talk.

The ironic thing is that Galati always wanted to be a doctor when he was growing up. “I didn’t know the reason why I wanted to be a doctor, I just wanted to help people,” he says. When he was in elementary school, a good friend of his collapsed and died suddenly from a ruptured brain aneurysm. The put a lot into perspective for Galati — things like we’re not invincible, even at a young age, and medical problems can impact anybody.

The road to recovery wasn’t easy. “I didn’t know how severe my injury was,” he says. Actually, the area where Galati suffered a bleed was between the understanding and speech centres of his brain. He could understand everything people were saying to him, and he knew what he wanted to speak to them, but he just couldn’t put it into words for many months after the accident. So, when he did start to speak, he wasn’t really making sense. “I literally had to spell everything out in my brain before articulating it. I couldn’t speak spontaneously in long sentences,” he says.

After acute care, he was transferred to a neurological step-down unit at Sunnybrook Health Sciences Centre in Toronto. Demoralized and depressed, he didn’t want to see anybody. “I was looked at by my friends as an intelligent person, then suddenly I couldn’t even string two sentences together.”

Galati credits his family for helping him move forward. “We’re a very close-knit family, and I think that was one of the most important things that helped with my recovery,” he says. Almost from the moment of the accident, Galati’s older sister started looking for ways to improve his nutrition for brain health. The rest of his family were trying to stimulate him in other ways. “I remember my mom at my bedside, practising flash cards with me, basic math and reading,” he adds.

Then, a friend of his sister brought him hope in the form of a book, My Stroke of Insight, about the journey of a neuroscientist who suffered a  stroke and eventually made a full recovery. “That is where I first learned that a recovery from something like this was possible, because somebody had done it before,” he says.

Perhaps the greatest gift for Galati is this: When he was moved to the Toronto Rehabilitation Institute after Sunnybrook, he was enrolled in a study conducted by the Canada Research Chair (II) for TBI led by Dr. Robin Green, focusing on the effects of intense rehab on recovery. This meant that Galati received double the amount of therapies of other patients, helping to accelerate his recovery. In his final evaluation before leaving Toronto Rehab, he had already started making amazing gains, and although nothing was severely impaired, it was clear that it would still take a lot of hard work to return to his medical studies.

Galati stresses that his injury occurred eight years ago, at a time when there was little understanding of the brain’s ability to heal. “The thinking used to go like this: The brain cells you’re born with are what you die with, that there’s no real potential to create new brain cells or for the brain to reroute itself,” he says. There was little talk of the ability to create neurons and for the brain to reroute and heal, a notion that has emerged in recent years. He went home with the determination to try his absolute hardest to give himself the best possible chance of returning to his dreams and aspirations.

“There’s no guide that tells you what the next steps are,” says Galati. But there is a book, Spark: The Revolutionary New Science of Exercise and the Brain that practically became his bible. The book references a school district located in the outskirts of Chicago that revolutionized their gym program, by having students perform aerobic exercise each morning before their studies. At the end of the year, in its standardized testing, this school district scored No. 1 in the world in science and No. 3 in the world in math — in the world. “The book goes into the physiology behind what exercise actually does for the brain — it’s literally the best thing you could do to support your brain health,” Galati says. That got him thinking.

Galati didn’t sit around waiting for his brain to catch up. He researched ways to help himself, learning the importance of creating new brain cells and then imprinting them with meaningful information. “Neuroplasticity is the ability of neural networks in the brain to adapt, heal and change,” says Galati. “The more you do things over and over, the stronger those relevant connections become in your brain, and the better you become at the task.”

He developed his own vigorous protocol based on five lifestyle pillars. First, aerobic exercise, as it has an enormous positive effect on the brain, including the ability to create new brain cells. So, he hit the ground running, literally, covering five kilometres every morning. Following the run, he would fill newly created brain cells with meaningful information by stimulating his brain in different ways. He read books, he reviewed his med school notes and he picked up a guitar. “I just tried to cover every area of my brain,” he says. He used other pillars to promote healing, too, including practising good sleep hygiene, limiting harmful exposures, mindfulness and meditation, and eating a brain-healthy diet filled with nutrient-dense foods, focusing on organic produce, which isn’t full of pesticides.

After six months, he had another evaluation at Toronto Rehab. “Everything was through the roof. I was above both the brain-injured and standardized population for that age and education level,” he exclaims. It was surprising to Galati, who knew he was better than before, but didn’t realize that he was going to be above the brain injured and the standardized population — in the top one per cent, in fact. In September 2013, he returned to school to complete his medical degree and, subsequently, his medical residency program. Yep, he did that. Yes, it’s Dr. Galati now. Now he has his own family practice and works at a rehab hospital in Toronto.

Here’s the thing: Approximately 1.5 million Canadians are living with a brain injury. Statistics indicate that 150,000 people in Ontario will experience a brain injury each year — more than multiple sclerosis, HIV/AIDS, spinal cord injuries and breast cancer combined. Dr. Galati’s own recovery identified gaps in TBI patient navigation/rehabilitation protocol, including the lack of education and resources. Now, he is on a mission to change the stigma around brain injury. And, that is why in 2019 with the help of his family, Dr. Galati founded Brain Changes Initiative, a non-profit organization that helps raise funds for traumatic brain injury research at the Toronto Rehabilitation Institute and provides education and support for survivors, their families, health-care workers and people who are interested in living a brain-healthy lifestyle.

“I want it to be common knowledge that you can make a great recovery from something like this,” he says. The website (www.brainchanges.org) offers educational resources, blogs and links to events. That’s not all. He wants to walk the talk, showing people how to live a brain-healthy lifestyle through his community outreach programs, such as Brain Changes’ Sunday runs through Toronto’s High Park. The runs also incorporate plyometric exercises, which further elevate the heart rate in addition to building strength. The run is designed to create brain cells and then show how to integrate mindfulness into the day, with sponsors providing brain-healthy meals. “The idea is that we’re showing people how to live a brain-healthy lifestyle — we’re not just talking about it,” he adds.

Dr. Galati had to be pried out of his car with the Jaws of Life after the accident. It’s hard to even look at the photos. “It really makes you appreciate, well, just about everything,” he says. “Even the little things, like the ability to talk that we take for granted.” His TBI gave him a tremendous amount of empathy for people going through the same thing. He encourages survivors to do their best after being diagnosed with TBI. “No one should dictate what your goals and dreams are.”

Luckily, Dr. Galati had a background in medicine, so he knew where to look for information, but not everyone has a science background. “Once I made this great recovery and was able to complete my medical education, I took it as a calling and a responsibility to go back and say, ‘I want to change the standard of care, so others can have the best chance of recovery,’” he says.

CITY LIFE MAGAZINE  @citylifetoronto
RT @Bell_LetsTalk:Today, every view of this video helps create positive change. All you need to do is watch it and Bell will donate 5… https://t.co/fGsjnWTQz9
reply retweet favorite
Instagram
Big wins last night at the 2021 Emmys for “The Q