A Home Away from Home – Newcomers to Canada 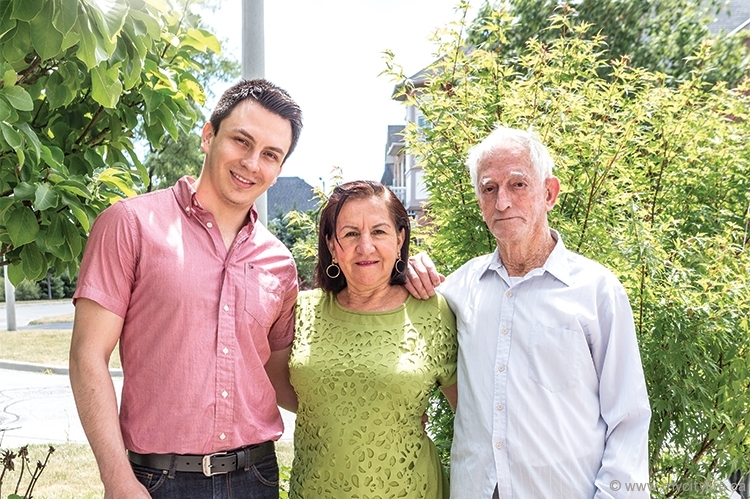 From left to right, Juan Carlos with his mother, Melva, and father, Bravlio

City Life talks to Juan Carlos Gallardo, who has helped his family create a new home in Vaughan after emigrating from Ecuador.

The sound of perpetual Vaughan traffic fades away as I pull into Juan Carlos Gallardo’s modest subdivision. The streets are quiet, and aside from the odd passerby, nothing seems much different from the rest of this city. Canadian flags hang sporadically above garage doors, mailboxes dot the streets, a man walks by with his dog. One of these houses is home to the Gallardo family, a new family in this Canadian city, welcomed here only two short years ago from Ecuador as permanent residents.

Before long, I’m sitting in their living room, opposite Gallardo, with the sounds of his young niece and nephew floating down from upstairs as they play. We’re sitting in his home talking, but we’re not really in his home. We’re in Ecuador, many years ago, in coffee fields, as Gallardo shares his favourite memories in earnest detail.

Prior to moving to Canada, Gallardo worked for an organization where he managed a fair trade coffee agreement for 600 families. He speaks about how they worked to integrate coffee with other farm products the families produced in order to help them make a living.

“It was a really good memory for me,” he says. “Those people are poor people, and when they received help from the associations or government, it helped a lot to [give them] a better life, because the main resource there is the coffee.”

His parents join us throughout the interview, greeting me with warm smiles and handshakes, attempting simple English words. “They don’t really speak English,” Gallardo says apologetically. With a mix of limited Spanish skills on my behalf and their limited English, we manage. Gallardo translates when needed for his mother Melva, 64, and his father Bravlio, 80, as we speak.

Gallardo himself is 27 years old, and is currently working with a painting company. He arrived in Canada with his parents after his sister, who is a Canadian citizen, sponsored them. Gallardo and his parents currently reside in his sister’s house in Vaughan.

Gallardo says the reason they came to Canada is twofold. “We came to get a better life,” he says, then adds that they are also here to aid his parents’ deteriorating health, specifically his father’s.

“He has a problem with his hearing,” Gallardo says. “He can’t listen. He was trying out some medicine in my country, but it wasn’t helping him. He also has other problems with his health, because he’s a senior.”

As Gallardo quickly learned, however, this “better life” comes with a lot of work. When he first moved here, Gallardo began working full-time and taking night classes to learn English at the Vaughan Welcome Centre Immigrant Services. Recently, Gallardo has made the decision to take classes full-time during the school year at the Welcome Centre in an attempt to improve his English. He hopes this will help him apply to an environment-focused university program, like biology, a field that he previously studied in Ecuador.

George Davidson, the general manager at the Welcome Centre Immigrant Services, lists Gallardo among his most enthusiastic students, saying that his “can-do” attitude and “enthusiasm” are what make him stand out.

“Most of [the immigrants that study here] are like that,” he adds.

“Language is always a key piece here. If you can get to at least level five, you can compete in the workforce,” Davidson says. The Welcome Centre, however, teaches English language courses up to Canadian Language Benchmark level nine, although other facilities may teach up to level 12.

Gallardo says his passion to learn English was fuelled by his lack of understanding when he first moved here. He says the language barrier left him feeling isolated because no one would take the time to help him.

They tried to speak with me but I couldn’t understand [anything]. Just yes, yes, no, OK. It was terrible for me

“Most of the time, people around here, they work a lot, usually they don’t have time to. Every time I needed another person to relate to me, or help me do things, it was hard for me,” he says. “Especially in my social life, I [couldn’t] start a conversation with another person. The [most] difficult thing to communicate was work, usually my boss or some co-workers, they tried to speak with me but I couldn’t understand [anything]. Just yes, yes, no, OK. It was terrible for me.”

Dr. Monica Boyd, former Canada Research Chair in Immigration, Inequality and Public Policy, who is now a professor at the University of Toronto, says a combination of losing their social circles and a lack of understanding of conversational English can be difficult for immigrants.

“A lot of immigrants think they have learned either French or English … but they’re not aware that saying you speak a language formally is very different from being in a context where the language is spoken rapidly, where there are a lot of colloquialisms, a lot of phrases you may not understand and you’re expected to interact very quickly back,” she adds.

Organizations like the Vaughan Welcome Centre help immigrants significantly, especially in areas like Vaughan where, according to Statistics Canada’s 2011 census, foreign-born residents make up 46.4 per cent of the population. The Welcome Centre partners with other organizations to offer programs at no cost, like the English-language classes Gallardo takes, or classes to help permanent residents apply for Canadian citizenship — which the Gallardo family says they will look into in the next year when they’re eligible to apply.

For now, though, the Gallardo family will continue to shape their new home and build their life in Vaughan, a place they have come to love. Gallardo says his favourite part about Canada so far has been the laws, and the hospitality shown by public workers.

“I love the laws,” he says. “They control everything. They help you a lot. For example, in my country when you take a bus, you don’t have these benefits with a ticket. You can’t transfer to another bus. They also have a lot of information for people. If you go to a station, or city hall, wherever you want, they give you any information you want to know about Canada, or about around you, like the place you live.”

Before I leave, I turn to his parents, who have been listening to us speak, and ask if they would like to share anything about moving to Canada (while Gallardo translates). His mother jumps in with a few words and a kind smile. “Benito Canada,” she exclaims, as his father nods along.

“She says Canada is pretty, it’s beautiful,” Gallardo says. As she continues, he translates: “Here they’re polite. They respect each other. She likes that.”

It’s interesting to think that just two years ago, Gallardo would have been in the same situation, unable to discuss his experiences with me due to two vastly different languages dividing us. The importance of free English programs, offered to newcomers like the Gallardo family when entering a new culture, lingers.

“It’s helped me a lot,” Gallardo states, adding he’s learned much more than just a language from their resources. By partnering with other organizations, including the police and COSTI Immigrant Services, the Welcome Centre has taught Gallardo, in his own words, how to “adapt to the culture,” while creating a new home in Canada.

It is here in the heart of Vaughan, a piece of their Canada, where the Gallardo family has chosen to create their new home.

The Secret Life of a Farmer

A Home Away from Home – Newcomers to Canada