How To Stop Bully 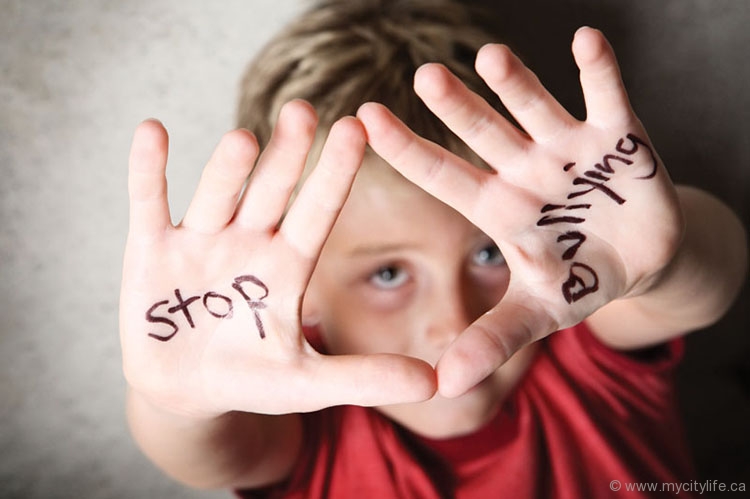 Q: How does bullying impact one’s self-esteem?
A: It’s not so much self-esteem but self-control. It’s how you see yourself relating to others. There are kids that think there’s no harm done — I didn’t hit anybody; all I did was tell them that if they don’t do this, I am going to come back and do something to them. It’s those types of threats, or through social networks, that are effective ways to get people to do what you want. These are not appropriate ways.

Q: Can adults bullied in school move past the childhood pain to lead healthy lives?
A: Not all do. Some might say that it’s had a lifelong affect on them. Others will say that they remember it but it didn’t have an affect on them in the sense that it’s pretty common and I just have to grow out of it. Let’s say bullying happened in Grade 3 for three months — it affected you and made you feel uncomfortable for quite some time, especially in different situations. Eventually, it didn’t reoccur and you feel pretty confident you’re on a good track again. A lot of people will say that they were victims of bullying but it didn’t affect them because it doesn’t affect everyone in the same way or have a lifelong consequence. Others will say it happened in Grade 3 and then when I went to middle school, the same kid started it again, and it continued into high school. Unless they get help and talk to someone about it, it’s not easy to overcome that feeling of being victimized.

Q: Can you explain how children who watch what’s unfolding are also involved in the act of bullying?
A: Bullying is an act that usually has an audience because power differential isn’t very usual unless other people respect it. In order for me to feel like the top dog, I need those other kids to see what I can do. It’s the same thing adults would do if they wanted to bully somebody. We’ve known for some time that bullying incidents occur with at least one other person besides the victim present. It makes people witness your power over that person. We know that the best prevention is for bystanders to know that they’re not innocent and that it’s not entertaining to watch someone be bullied or beaten. It’s wrong and we now advise kids what to do if they come across those situations without risking their own safety. They cannot necessarily stand up and stop it, but they can stop it by calling for help or reporting it later so it doesn’t continue.

Q: As a program director of the school-based program The Fourth R, do you believe its curriculum can help reduce the act of bullying?
A: Absolutely. In order to get rid of bullying we need to educate not only our kids but adults as well. As far as I can see, education is the No. 1 prevention. We can’t go around and try to snub out every bully. There’s no medication or surgery that’s going to get rid of it, so basically you have to reduce it gradually by teaching kids how to respect one another.

Q: Is it common for kids not to tell their parents about what is happening to them at school?
A: Yes. When it’s something that a child feels they may get in trouble for or the parents may embarrass them about, they worry that the bully will hear about it and only tease them more. It’s a very sensitive topic for kids because they feel weak. They feel victimized and it’s very hard to feel strong when you feel that way. That’s why peers are important because they need to say “I’ll tell somebody.” If a parent is informed about it, they know what to do. The parents shouldn’t fire off a gun and go over to the house of the bully and threaten them. That’s what we’re educating parents about.

Q: What should parents do if their child is being bullied?
A: If the bullying is occurring at school, then absolutely they need to talk to the principal, that’s the first step. You gather the information from your child: tell me what’s happened, who’s involved, how long this has been going on, and then tell them that you’re going to help. Then it’s about going to the principal and getting to the bottom of it. The child is going to feel afraid because it’s exactly how a bully is set up. If you tell anybody, the bully will come on even stronger. The child has to trust that the parent will protect them and that the school will protect them. In the past, schools weren’t really good at that. The principal or vice-principal might say “kids will be kids” and that’s wrong. Now they cannot do that anymore. The ministry says you don’t treat it that way. You must take it seriously, talk to the person who is being accused of being a bully and if necessary, there are consequences such as suspension. There’s not always a clear bully and victim but there is a situation there that needs to be dealt with. It has to be handled by adults because the kids cannot work it out themselves.

Dr. David A. Wolfe is a professor of psychiatry and psychology at the University of Toronto, head of the Centre for Addiction and Mental Health Centre for Prevention Science in London, Ont., and program director of The Fourth R, a school-based program aimed at promoting healthy relationships while reducing violence and abuse amongst youth.
www.camh.ca, www.youthrelationships.org

How To Stop Bully