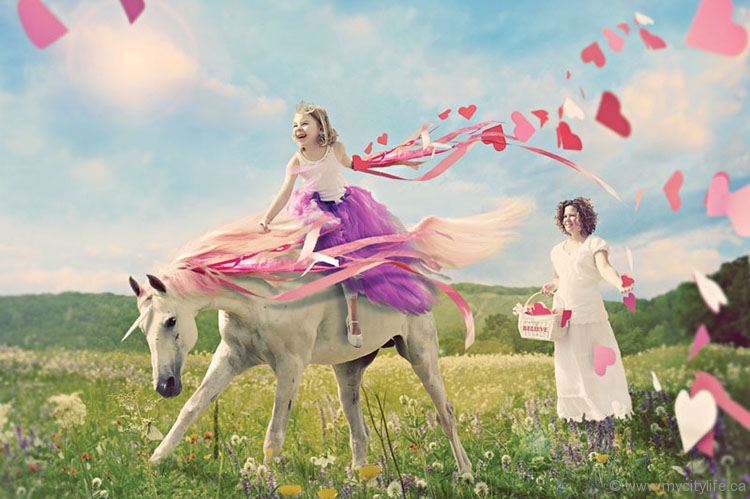 It began with a child’s doodle.

Shawn Van Daele’s parents were rummaging through their belongings at home when they unearthed an old hand-drawn picture created by their son. They passed it on to Van Daele to take a peek at his childhood talents, but the time-worn image sparked much more than reminiscing for the 35-year-old photographer. On that day in April of 2012, the Drawing Hope Project was born.

Van Daele, an artist both behind the camera and in front of the computer screen, decided to recreate his seven-year-old self’s masterpiece using his skills in photography and Photoshop. The end result was a fantastical, nostalgic mimic of the scribbled original, and it inspired him to offer that same magic to children struggling with life-threatening illnesses.

“The idea behind it is to help kids realize that anything is possible,” says Van Daele of the Drawing Hope Project, which has made a colourful splash in the lives of families across North America. “They get to see their imaginations come to life.”

Sick children from across the continent are conjuring up their own doodles for Van Daele. Once the art is in his hands, the magic begins with a photoshoot with Van Daele himself, followed by long hours at the computer. The end result: a recreation of their drawing that not only captures the whimsy and wildness of a child’s imagination, but shares their story of struggle and hope with the world.

“It started out as a storybook,” Van Daele says of his initial plan. “I was going to take all the drawings and put them together, all the kids becoming a specific character in the book. It’s turned into something a lot bigger than that, though. It’s something that the families are finding hope in.”

Seven-year-old Ryley Mitchell was one of the first to get involved in Drawing Hope. The recipient of a heart transplant at seven months old, Ryley and her family have been tugged through the ups and downs of childhood illness.

“Her life is so — I don’t know, reality-based, I guess you could say,” says her mother, Johanna Mitchell. “She has tests and blood work all the time, so for her to be able to draw a picture and then have somebody make that picture magical, it’s sort of a little break from that reality.”

Ryley makes her debut as “The Queen of Hearts” this February with the release of The Drawing Hope Project: The Hunt for the Hope Stone. Sailing, flying and casting spells alongside her are the likes of Kayla, “The Forest Keeper,” who was diagnosed with Crohn’s disease at the age of nine; Chance, “The Captain,” who struggles with pre-B-cell acute lymphoblastic leukemia; and Dominic, “The Time Traveler,” who was born prematurely with Down syndrome.

“You know, it’s easy to be beat down and depressed in situations like that. But it’s also just as easy to try to find hope in the whole process of coping and dealing with stuff,” says Van Daele, who is optimistic that one day Drawing Hope will touch the lives of children not only in North America, but worldwide. “That’s kind of the route I took, and I took that as an inspiration, as well.”