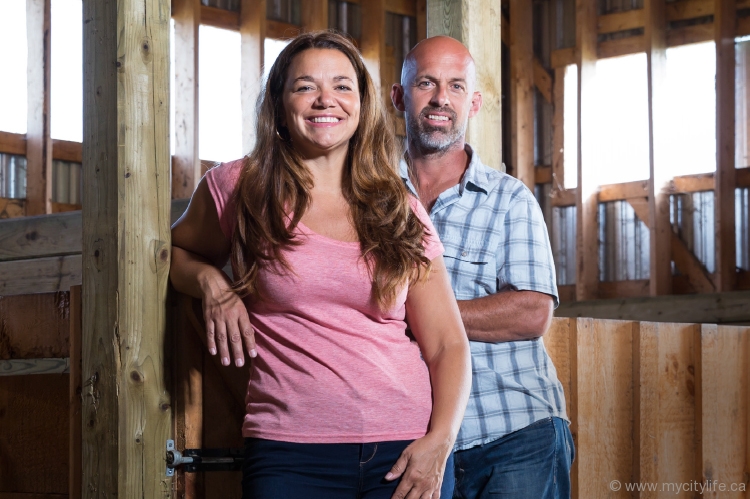 Sensing a trend to healthy eating decades ago turned Beretta Farms from a 100-acre property to a Canada-wide movement of 40 ranchers embracing organic farming — for the betterment of us all.

Twenty-five years ago in 1992, few people were as curious about where their food came from as they are today, but two who were ahead of the curve were Cynthia and Mike Beretta, who took their curiosity a step further and turned it into control. In that year they started Beretta Farms with the purchase of a 100-acre property in Huron County, where they took a then-new approach toward organically raised animals, beginning a commitment to producing healthy alternatives for families. Beretta Farms now has become one of Canada’s top producers of organically raised animals.

“We had young kids, and the thought of buying store-bought meat that had hormones and steroids seemed very foreign to us, so we started raising animals,” says Cynthia Beretta. “We wanted to know where our food came from and being in control of that was really important to us, and feeding ourselves and our family healthy food was essential. As we started to do it, more and more of our family and friends wanted to be a part of what we were doing and started buying our products. We seemed to be in the right place at the right time.”

It was helpful that Beretta was raised in the country by her Italian parents on some acreage where her mother had a large garden, exposing her to the benefits of growing your own organic food from scratch. Her parents also had a barn, but they did not farm — until Beretta asked her dad to put some pigs in the barn and started to raise them. When she began dating Mike, he was reminded of his childhood passion for visiting pig farms, wanting only to spend time with the pigs and clean out pens.

“We wanted to know where our food came from, and being in control of that was really important to us.”— Cynthia Beretta

“When we started our first farm, it wasn’t to start a company,” Beretta recalls. “It was just doing something we believed in, and it just grew. Other people wanted to make a change in their lives, and we offered another option for them.”

Farm life was not without its setbacks, but from misfortune grew strength and relationships. In October of 1995 a devastating fire cost them their barn and their entire family of livestock. The following spring, the local Mennonite community came out and rebuilt the Beretta barn with a traditional barn-raising, beginning a lifelong relationship with the Beretta family.

Great success followed that tragic event for Beretta Farms, to the extent that they opened the Beretta Butcher Shop in Brussels, Ont., and their products began to be found on local restaurant menus. “The butcher shop seemed like a logical next step for us,” says Beretta. “If we were to be spending all of this time and effort growing animals organically and ethically, we wanted to harvest them in the most humane manner possible. This gave us control over the entire process.”

With their success, they realized they required a larger farm near a large urban area and purchased 800 acres of prime agricultural land in King City. This proved to be the right choice, as by 2006 Beretta was making regular deliveries to large banner retailers along with a growing number of independent health food stores and grocers. Today, Beretta Farms’ products can be found at Loblaws, Metro, Whole Foods and Pusateri’s, among many other stores, while restaurant chains such as Chipotle, A&W and Earls feature their organically grown meats.

In 2011 they began a catering operation out of their Etobicoke head office, Beretta Kitchen, which counts the Toronto Maple Leafs and visiting Major League Baseball teams among its many clients.

“The food industry has been changing rapidly in the last decade,” observes Beretta. “As the pace of life quickened, food became very commercialized. In the last few years we’ve recognized a resurgence of people wanting to know where their food comes from. It seems like food is sexy again. We’re finding that people want to get to know their local farmer or where the restaurant they frequent is sourcing its food.”

As the popularity of animals raised organically and without the use of antibiotics, added hormones or steroids increased, it allowed Beretta Farms to expand its product line and list of retail partners and restaurants. But there was only so much one farm in King City could do, so to keep up with market demand, Cynthia and Mike reached out to other ranching families in Canada who were like-minded in their approach to organic farming. Today, the Beretta Farms “family” totals more than 40 ranches, from Ontario to the west coast, that Cynthia and Mike know and trust for their approach and their quality.

“We’re very proud that we keep farmers farming,” says Beretta. “Canadian farmers are hard-working people and proud of what they do, and we’re proud to support them.”

Instagram
Looking for something delicious to warm up with? C