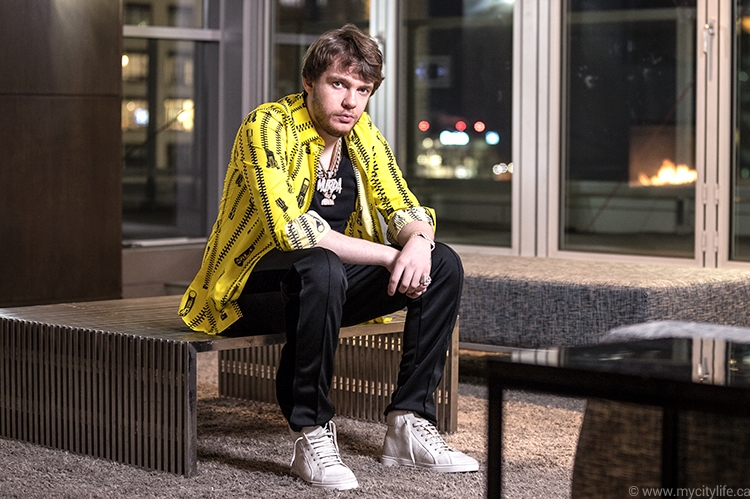 The odds were stacked against Murda Beatz; realistically, there was every reason for him not to make it. Feeling like a misfit who was on the outside looking in, Murda grew up in small-town Ontario, a long way from the music scene. But that didn’t deter him.


It was an inauspicious beginning for Shane Lee Lindstrom, known famously as Murda Beatz, music producer, songwriter, DJ and beats-maker. His reddish-blond hair, with its tiny front flip, and his neatly trimmed beard and funk designer sunglasses are rocked by the cascading neckline of solid gold, diamond-encrusted necklaces, some of which weigh 800 grams and are carved in white and rose gold lightning bolts with his initials. The bling, which Murda loves, and in some cases actually designs, costs anywhere from $10,000 to $100,000 (one of his buckles costs $30,000).

Growing up in Fort Erie, Ont., a small town on the Niagara River directly across from Buffalo, N.Y. (population 30,000-plus), Murda, who now calls himself the sauciest white boy in the game, felt more like a misfit than a part of the lit scene. A leftie (everyone else he knew was right-handed, which made him feel even more like an outsider) who couldn’t skate and didn’t know how to play hockey, Murda was juiced to find his edge, the thing that would both define and represent him.

“I HAVE MY OWN SENSE OF FASHION STYLE”

Surrounded by classic rock and heavy metal as a kid, Murda’s dad, whom he credits as being one of the only people who believed in him from the start, was hoping that his son would pick up the guitar. But Murda, now an in-demand star collaborator (“I will cook up a beat and decide who it fits and then send it off to them”), taught himself how to play the drums instead. By the time he was in Grade 11, Murda was creating the beats that were a precursor to his galactic and cosmic-like rise through the hip-hop, rap and trap music scene. (Trap is a subgenre of dance music, which originated with southern rappers such as Waka Flocka Flame, Three 6 Mafia, Gucci Mane and Young Jeezy in the late 1990s. Large on attitude, the trap sound is expressed through the ting-tinging of brass, triangle and triple hi-hats, loud kicks, snares and low-end 808 brass samples.) Interestingly, as with a lot of extraordinary-but-at-first-glance-looks-ordinary avant-garde trailblazers, Murda’s high-school principal couldn’t see the vision, telling Murda that there was only one Dr. Dre. But Murda, who believes a person is destined to be who they are, knew once he’d created his first beats that it was exactly what he was meant to do. Eschewing business school, which Murda originally planned to attend (because he loves to make money), he became, instead, a relentless and dedicated fanatic of networking (especially starting out). He used every social media platform out there in order to create both visibility around his name and, just as importantly, connect with the rappers he wanted to create his beats for and with.

Although he started out on the drums (he had an all-black Pearl drum set), after Murda was introduced to and bought FL (Fruity Loops) Studio (FL is a full-scale software music production environment), he sold his drums, then traded in his guitar for an AKAI MPK49 keyboard, so that he could create his beats on a piano.

“When you get to a certain level in producing, you want to keep evolving, so the next step for me was producing and putting collaborations together under my own name”

In 2014, when Murda met Cory Litwin, who became his manager, his circles of influence grew exponentially. The two would go out to nightclubs constantly, totally jamming a fake-it-till-you-make-it attitude, leaving people wondering just who the “treat-him-like-a-star white boy” was. It didn’t hurt of course that Litwin chilled in the same circles as Drake and the Weeknd.

“When I first met Cory, he wanted me to sell a lot of beats, so we could make money,” Murda says. “I was selling beats on the Internet for $50, $150, $250. I’d go to Western Union and pick up the money. I was going to start making SoundCloud — and start selling beats for $50 — but at the last minute I decided not to do it. I didn’t want that to be my worth. So I decided to stop selling beats altogether.”

Migos, whose genres cover hip hop, SoundCloud rap and trap music, gave Murda his big start as the in-house producer for their 2015 song “Pipe It Up,” which reached 38 on the Billboard chart. “The industry started to shift in 2015,” Murda says. “Once streaming started in 2016, it changed everything. Streaming builds up the numbers; it makes everything more accessible. And you can make money as a producer.”

Major collaborations the next year (2016) with Gucci Mane (“Back on Road”), PARTYNEXTDOOR (“Like Dat”) and French Montana (“No Shopping”) ignited Murda’s trajectory.

A favourite story that Murda likes to tell happened one night when he was chillin’ at Drake’s home in Toronto, playing NBA 2K18 with him, and the rapper ordered up a beat that included a female voice. Murda, never one to waste an opportunity, created the beat on the spot for Drake, which ultimately turned out to be the collaborative five-times platinum track “Nice for What,” which debuted in the top spot on Billboard’s Hot 100 chart (for the week ending April 21, 2018), and for which Murda received production credits. The song features Drake and Lauryn Hill, with Big Freedia and Letitia Wright bridging. One of the song’s breakdowns, “Gotta, g-g-gotta, gotta, gotta make that jump, jump, let’s go,” mirrors Murda’s own jump forward from making beats to producing them, ultimately becoming a much-sought-after artist producer in his own right. “When you get to a certain level in producing, you want to keep evolving, so the next step for me was producing and putting collaborations together under my own name,” Murda says. “It’s fun to get into a new genre that is brand new. And I love bringing on new talent. I feel like it’s a canvas that you can paint and tell a story in a different way; it’s exciting.”

To that end, Murda recently signed English hip-hop/pop musical artist Adam Halliday to his publishing company, Murda Gang. “Adam is an amazing artist with a fresh new voice that no one has heard before,” Murda says. “And it’s fun to work with a new and up-and-coming-artist. It’s more open and experimental. It’s probably going to be the best music I have ever made.”

Rapper G-Eazy, who took Murda on tour with him in 2018, has said that “he’s almost like an alien, because his origins don’t seem to make a lot of sense. He’s from the middle of nowhere in Canada, but somehow he’s making some of the most culturally relevant music.”

The year 2019 was a supersized one for Murda. His Floor Seats Tour, which featured him performing crowd favourites like “Butterfly Effect,” “MotorSport” and “Nice for What,” also highlighted special guest A$AP, and in Toronto (Murda’s favourite stop on the tour), it highlighted local artists Puffy L’z, Chromazz, Jay Whiss, Booggz and Young Smoke. “It was an amazing experience,” Murda says. “The mosh pit was crazy.”

In the fashion-meets-music category, Murda collaborated with PnB Rock and Nicki Minaj on the song “Fendi” for the FENDI Prints On collection, a partnership between Nicki Minaj and Silvia Venturini Fendi. “It was dope,” Murda says. “PnB played the ‘Fendi’ song for Nicki, and she said it was her favourite. Having worked with Nicki before (‘Motor Sport’), I feel we have good chemistry; we should do more work together.”

This year, Murda is appearing as a mentor on an episode of Rap Mentors, a show hosted on a Forbes app called Forbes88. The show features rappers such as Snoop Dogg expounding on the hardships and roadblocks they encountered on their way to the top. “It was dope,” Murda says. “I hope my input inspires youth and anyone else who needs inspiration, inside or outside the music industry.”

Back in the day, it was pretty much de rigueur for Canadian musicians to leave Canada and go to the United States in order to make it big in the big time. Things have changed. It would be hard now to outclass the world-class behind-the-boards Canadian producers who are influential change-makers in shaping the future of hip hop and rap. These include Drake, Boi-1da, the Weeknd, Nav, Noah “40” Shebib (producer of Drake’s albums), WondaGurl, Paul “Nineteen85” Jefferies, PARTYNEXTDOOR, Tory Lanez and, of course,Murda Beatz.

“MY SIGNATURE IS IN ALL MY BEATS; PEOPLE RECOGNIZE IT IS A MURDA BEAT”

A 26-year-old small-town Ontarian with a wealth of connections, one of Murda’s singular strengths is his savviness to keep going, to not be defined by the beats of the moment. He has no interest in being a hip-hop producer who’s reached his “best-before” date. In fact, Murda is “stan” (dedicated), as far as his music is concerned. “My signature is in all my beats; people recognize it is a Murda beat. When people who are big fans of the music hear the beat, they know it’s a Murda beat; it’s the way the beat sounds.”

While Murda might be a supersized Gen Y millennial, ages 22 through 36 (his net worth is estimated at $3 million), the spending power of his generation will vastly exceed that of their parents. This age group has money for $4 coffees, high-end groceries and products that respect the environment. With a current annual spend of US$600 billion and a forecast of that spend increasing to US$1.4 trillion as millennials pay off loans and earn higher salaries,1 there is money to spend on product quality, trusted brands and jewelry.
And while they often have different overall habits from previous generations, millennials still have a traditional view of love, but when it comes to buying engagement rings, they want a say in the design.

That said, Murda is not one to forget his roots. Recently, he donated $20,000 to Fort Erie Secondary School’s music department, his old alma mater. “I plan to go back there in a couple of months and see what instruments the school bought, meet the kids and take pictures,” Murda says.

CITY LIFE MAGAZINE  @citylifetoronto
With over 90,000 readers, broaden your reach to a new audience! https://t.co/fyc94gPiVZ
May 25 reply retweet favorite 4 days ago

CITY LIFE MAGAZINE  @citylifetoronto
With over 90,000 readers, broaden your reach to a new audience! https://t.co/fyc94gPiVZ
May 25 reply retweet favorite 4 days ago