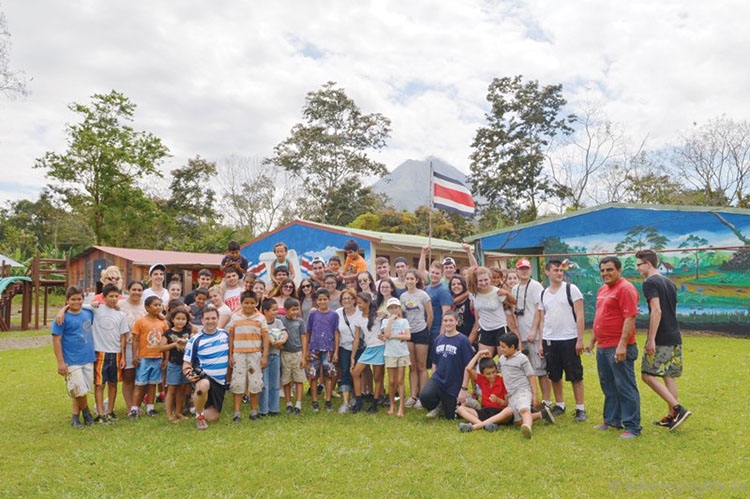 Anthony Gorys and his students were busing back down from Monteverde, the Costa Rican town near the majestic Monteverde Cloud Forest Reserve, when they passed a school with a roofless building. Gorys, an English and physical education teacher at Father Bressani Catholic High School, had noticed the school before, having taken students up to Monteverde in the past. But that day they decided to stop.

They had just dropped off supplies at another school in need, but many students dug deep into their own pockets for that year’s annual trip, resulting in a surplus of donated items. Maybe this school could use some too. The roof, they were told, had been destroyed in a storm. The school’s budget was so tight there was no money for repairs. Gorys and his students didn’t hesitate. They unloaded a bag of school supplies — pencils, pens, paper and more — and a couple of laptops and handed them over. Their beneficiaries were blown away.

“It would have taken a good four years for them to be able to save the money to buy one laptop, and we drop off two at the school,” Gorys explains. For his students to be able to make that kind of a difference, “the feeling’s fantastic.”

Gorys has guided groups of Father Bressani students on these charitable experiences in the Central American nation since 2010. It started small, six or seven kids, with one day dedicated to spending time at a rural elementary school. “Every year that I planned the trip after that we built up the community service aspect and really tried to help out down there as much as we can,” Gorys explains.

Before the annual March Break trip, students raise money and collect supplies that many Costa Rican schools simply can’t afford. It’s often just pencils and paper, but each school has different needs. Some need rice cookers, as Costa Rican schools are required to feed their students, which takes away from their already razor-thin budgets. At one school the students didn’t have a place to play, so, Gorys explains, “We raised the funds and built a playground for them.” For future trips, Gorys hopes to donate solar lights to tribal villages so villagers can read and interact at night without using kerosene lamps, which damage the eyes.

While there are days for the extracurriculars — zip lining and horseback riding through mountains — the best part for Gorys’s students is always interacting with the Costa Rican children.

“You can put kids in front of a bunch of monkeys in the rainforest, but the highlight is still being able to donate their time,” says Gorys.

“And that’s the part that keeps it going.”

PAM LEUDKE
Teacher at the Montessori School of Kleinburg

Pam Leudke was nervous the first year she participated in the Olive Branch for Children’s Montessori Outreach Program — and understandably so. The Canadian organization works to empower communities in remote areas of Tanzania through programs dedicated to such things as HIV/AIDS prevention and care, food and water security and early childhood education. Leudke had participated in the organization’s Montessori teacher training program two years prior, in 2007, but that brought teachers into the city of Mbeya. This year, in 2009, she would venture out into the surrounding Mbarali District, where villages were so remote they had no electricity, many lacked wells and, because of poor roads, much travel would be by bicycle or foot. You can understand her apprehension.

But by the end of her time there, her feelings changed. “I didn’t want to come home, because I just fell in love with the people I was working with,” she explains. “I just found my way back every year since then.”

For the past eight years, Leudke has set aside four to five weeks every summer to travel across the Atlantic and Africa to bring education to this remote region of Tanzania — a trip she pays for entirely out of her own pocket. It seems like a massive sacrifice to make, but for Leudke, that’s not the case.

“We’re simple people and our needs are simple,” says Leudke, a teacher at the Montessori School of Kleinburg with 20 years of experience. “I’m passionate about Montessori education. I love teaching and I love being with children, and so this was just kind of a natural extension for me.”

Since then, Leudke has spread the benefits of this education method to various villages in Tanzania, guiding teachers through its curriculum and working to educate their children. Today, 28 Montessori kindergartens have been established in the Mbarali region and they’re already seeing amazing results.

“Now that they’re moving up, for the past two or three years, these children have been consistently at the top of their class,” says Leudke, who is now the Canadian co-director of the Montessori Outreach Program. “It’s beyond my wildest dreams.”

With a new appreciation for the simple things in life, like food and water, Leudke is amazed at how happy the Tanzanian people are despite having so little. She sees the way they hunger for education, “because they know that’s the only way to improve their lives.” It’s an inspiring attitude, one that keeps her coming back year after year, especially when she knows she has the power to make a difference.