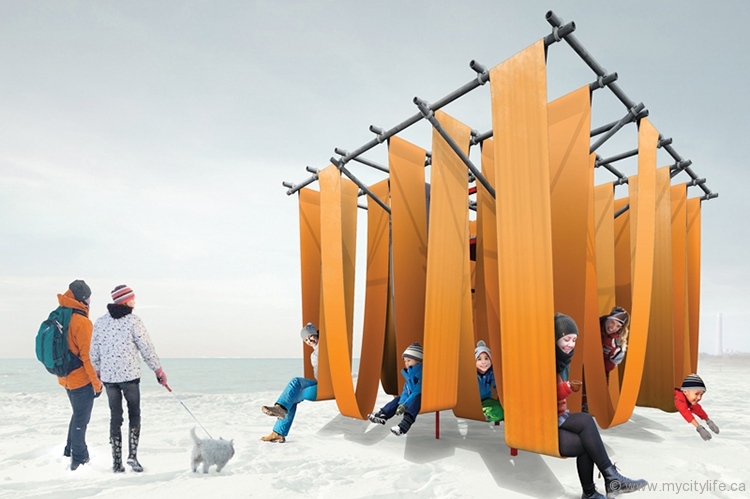 No one really wants to go to the beach in the dead of winter, especially in Toronto, a capital city of cold. But this year, one of T-Dot’s resolutions is to fall back in love with the freezing season, and a collaboration of designers and artists are helping to make this happen — and it’s all starting at the beach.

Toronto’s inaugural Winter Stations Design Competition is taking over Kew-Balmy and Scarborough Beaches from February 16 to March 22, livening up the stark, snowy landscape with four unique installations that were hand-picked from nearly 200 submissions from across the globe.

“We had submissions from Iran, Hong Kong, South Korea, Belgium, Holland, England, Chile, Argentina — a few from everywhere. It’s a literal United Nations of entries,” says Roland Rom Colthoff, the director of Toronto architecture studio RAW Design, one of the three artistically charged firms that thought up the concept for this event. The trio also includes Ferris + Associates, a firm specializing in landscape architecture, urban design and site development, and Curio, a public art and design management company.

In the end, the creations that made the cut were Sling Swing by WMB Studio in London and Liverpool, U.K., Driftwood Throne by DM_Studio, also in London, Wing Back by Tim Olson in New Hampshire, USA, and finally, one from one of our own: HotBox by Michaela MacLeod and Nicholas Croft in Toronto. For the rest of winter, these four installations will be on display for curious Torontonians to check out for free. A fifth installation, Snowcone, will also be there for ogling at, created by fourth-year Ryerson University students Diana Koncan and Lily Jeon in collaboration with the school’s Department of Architectural Science.

Using the theme of warmth as a guide, artists and designers were required to utilize the beaches’ utilitarian-style lifeguard stations in their creations. The point of the event is to use the syncing of bright design and icy landscape to enlighten winter-haters to the beauty of the season, and to that of the beaches, one of Toronto’s most underappreciated winterscapes.

“We thought this would be a great way to bring colour down to the waterfront,” says Colthoff, who enlisted a jury of five local experts to select the finalists. On the list is Peter Hargraves of Sputnik Architecture, a regular juror for Winnipeg’s annual Warming Huts Art and Architecture Competition who Colthoff met when RAW Design’s submission Nuzzles won at the event in 2014. Joining Hargraves are the Toronto Star’s architecture critic and urban affairs reporter Christopher Hume, Design Exchange president Shauna Levy, City of Toronto Ward 32 Councillor Mary-Margaret McMahon, and curator and co-founder of No. 9: Contemporary Art & the Environment, Catherine Dean.

So fill your tumblers with hot chocolate, don your long johns and trek out to what is probably the last place you’d usually want to go in the dead of winter: the beach. It may be Canada’s longest and most difficult season, but Winter Stations, which Colthoff says he hopes will become an annual event, proves that it doesn’t have to be the most treacherous time of year.

“We’re hoping to use this as the springboard for a lot of wintertime events at the beach,” says Colthoff, who happens to be a winter lover himself. “In the wintertime the city can be a rather barren environment, but there are things we can do culturally and events-wise to make it celebratory.”