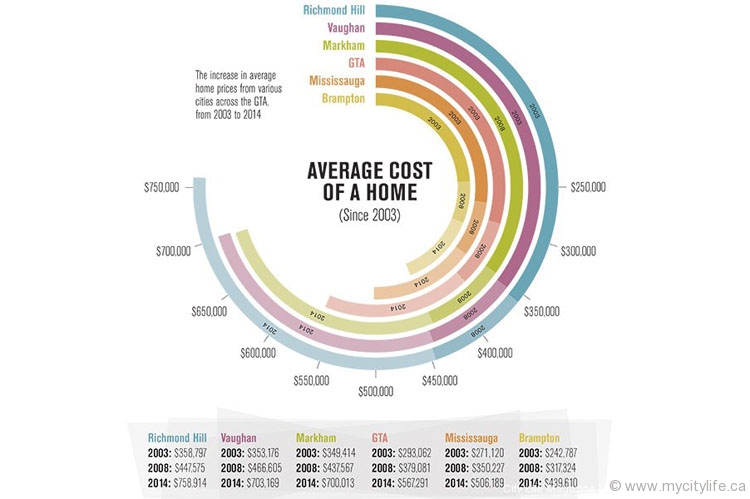 Words like “skyrocketing” and “booming” are often used to describe the state of the real estate market in the Greater Toronto Area, including here in Vaughan. But what do those modifiers really mean? How much does it actually cost to buy a home in the city? How much has Vaughan’s real estate market grown? And can prices get any higher?

Massimo Aiello remembers buying a semi in Vaughan at the turn of the century — and just how striking the contrast is to today. “When I purchased a semi in ’99, it was $180,000,” says the broker of record at Royal LePage Premium One Realty. “Today, the builder cannot even buy the lot at $180,000.”

It’s no big secret that Vaughan has grown by leaps and bounds in the past 20 years. Between 1996 and 2006, Vaughan was the fastest-growing municipality in Canada with a population that jumped more than 80 per cent, from over 132,000 to nearly 239,000, over that 10-year period. That influx came with the city’s booming housing market, which transformed the city’s open farmland into house-packed neighbourhoods of the suburban sprawl.

“The big story there is an enormously quick growth,” says John Andrew, professor of real estate at Queen’s University and the director of the Queen’s Real Estate Roundtable.

During that period, buying a home meant spending modest money. In 2003, for example, buyers put up an average of $353,176 for a home in Vaughan, according to the Toronto Real Estate Board. Fast-forward 11 years. Over the first six months of 2014, homebuyers were paying nearly double that amount: $703,169, a nearly 10 per cent year-over-year growth. Sound expensive? That’s because it is.

For the first half of 2014, Brampton and Mississauga — municipalities with substantially larger populations — averaged $454,658 and $505,934, respectively (up 75 per cent versus 2003 prices). In regions with smaller cities, such as out east in Durham and north in Simcoe, you can pay from the low-to-mid $300,000s up to the mid $400,000s. In Toronto, with condos and semis and the smaller, cheaper dwellings pulling the average price down, homebuyers spent just under $618,000 per home.

How has Vaughan — and the rest of York Region, for that matter — reached these soaring prices?

Like most things in life, it’s a combination of things. For one, many people are eager to move to these budding communities. As Massimo’s brother Sam Aiello explains, centrality is a big factor. Vaughan’s location grants easy access to major highways and transportation infrastructure (GO Train, YRT/Viva), providing options for commuters. Then there’s the shopping (Vaughan Mills Mall), plenty of schools and community centres, and the forthcoming hospital and subway — everything families could ask for. “I think these are key things,” says the sales representative at Royal LePage Premium One Realty. It all makes cities like Vaughan more attractive. And people are willing to pay for it.

It’s the double-edged sword of living in a healthy community: as the city thrives the value of property increases, meaning sellers get big returns on their real estate investment but buyers also need to spend more to get the home they want. Supply and demand, as it were.

Today’s record low rates mean affordability. What may have been a $2,000/month mortgage payment could now be down to $1,600, meaning more people can and will buy.

If you’re buying in Vaughan, chances are you’re looking at single-detached homes, the city’s most abundant type of dwelling (they account for 67.6 per cent of all home types in the city, according to the 2011 census). For one of these you’ll be shelling out over $870,000. That’s only about $50,000 less than the average detached in Toronto, which has been just over $920,000 through the first six months of 2014.

But will these prices last, and will they keep growing at this speed?

“I think we’re going to see a real plateauing,” says Andrew. This 5, 8, 10 per cent, year-over-year growth is simply unsustainable, especially when compared to income levels. The price of homes in Vaughan has doubled over the past decade: How many can say that about their income?

“The suburban single-family home model, which is very much the Vaughan story, I don’t see a lot of risk there,” Andrew adds. “I certainly don’t see that we’re going to have this explosive kind of growth in home prices, but I think it’s going to be fairly stable.”

Andrew believes over the next five years we’ll begin to see prices tracking closure to the inflation rate, “which might be around 2 per cent or so.”

Massimo concurs: “Slow but healthy. A good market. Nothing crazy. Slow and steady.”

There are about 55 residential developments that are either approved or under construction in Vaughan — 61 if we include the handful that are at different stages of the planning process. (The city, for example, hasn’t yet received an official development application for “The Met”).