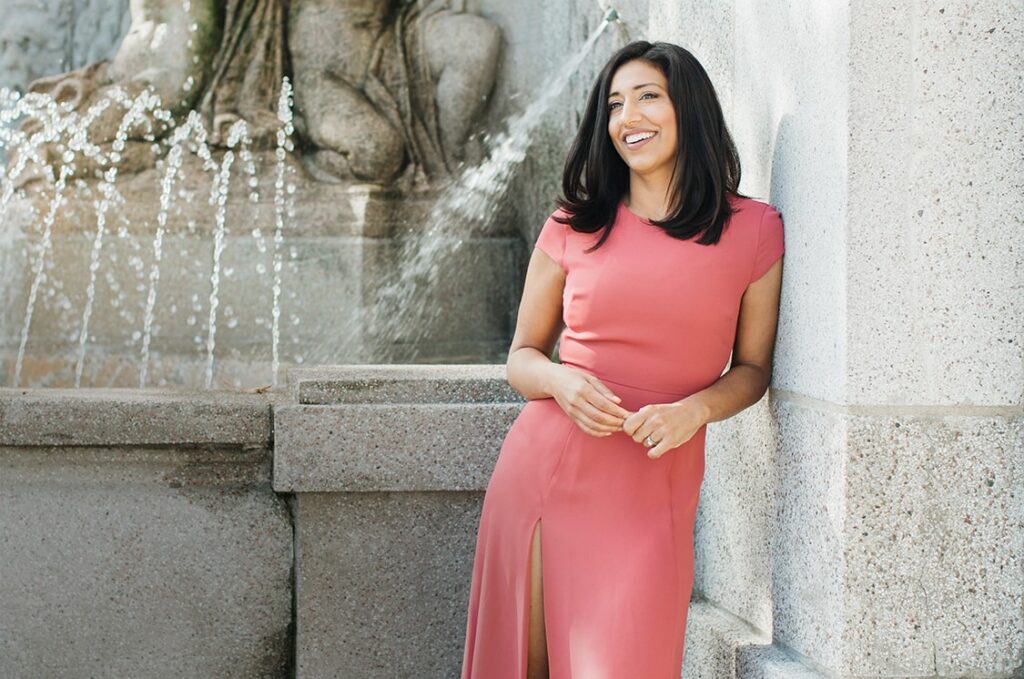 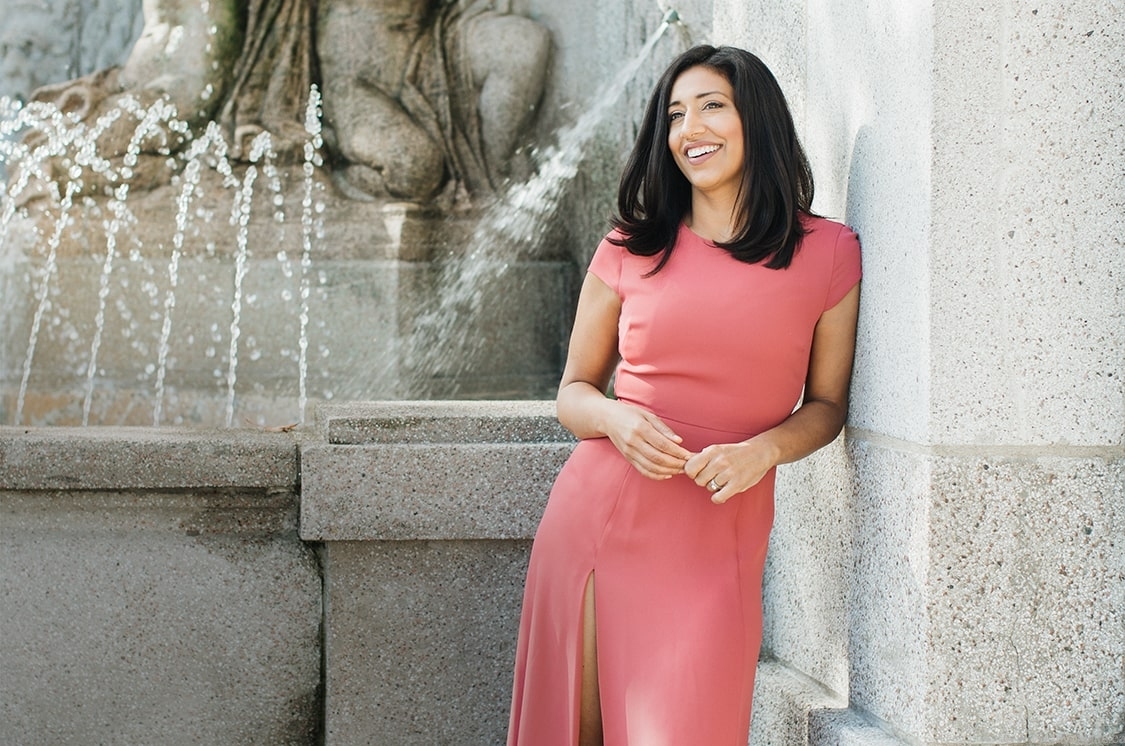 She’s one of Toronto’s most recognizable faces on TV. Farah Nasser, the motivational and thought-provoking anchor on Global News, has been providing viewers across the GTA with much-needed clarity for nearly two decades. She’s not afraid to dig deep, either, creating social media buzz as the force behind #FirstTimeIWasCalled and #LivingInColour, two digital series exploring the experiences of marginalized people. And she’s received huge praise for her TEDx Talk, ‘The Power of Intellectual Humility.’ Stay tuned — this girl is on fire.

When she was in Grade 4, Farah Nasser clipped out a newspaper article and took it to school for show and tell. She wanted to explain the Meech Lake Accord, a failed attempt to amend the Canadian Constitution and declare Quebec “a distinct society,” to her classmates. “The class was, ‘What are you talking about?’ and the teacher was, ‘What is happening here?’” laughs Nasser. “It was such a nerdy thing to do.” Maybe. But, it was also a foreshadowing.

Now Global Toronto’s news anchor, Nasser dispatches the 5:30 p.m. and 6 p.m. news Monday through Friday, helping viewers digest the events of the day. Anchoring a news show is not like sitting behind your computer, working in your pyjamas. No matter what’s going on, you have to pull it all together. “Sure, there are days when I’m down or I am anxious or whatever, but I just have to put that aside,” says Nasser. “In that moment, in that hour, I say, ‘Look, this is what is happening, and it’s going to be OK.’”

It all started when she was a child. “We would watch the news together as a family, and it was a really important way for my parents, who were new immigrants, to learn about the world,” she says. “Both of my parents, especially my dad, were interested in current events, so we would watch things from election coverage here to civil unrest happening in other countries.” Her dad passed on his interest in current events and politics to his children (her brother is a journalist, too), and as for Nasser’s mom, “she was interested in people, and she had friends from every walk of life, friends who didn’t look like her — Jewish, Black, gay.” That was a big deal back in the ’80s, she adds.

At school, Nasser started to figure out that she was really good at oral presentations, debating and speech competitions. In high school, she landed a co-op placement at a community TV station and never looked back. Nasser’s parents, however, had the immigrant dream and they really wanted their kids to be doctors or lawyers or engineers, she says. So, it’s funny that her dad would sometimes show up at a news scrum that Nasser was attending. “He would pass me a note and say, ‘You should ask this question,’” she says. “He was so interested.”

And who knows: Perhaps her dad’s curiosity for the news and her mom’s genuine interest in people mashed together to become Nasser’s superpower? And maybe that’s why she tries so hard to get people to understand? Take the devastation in Aleppo, Syria, for instance. Nasser made the conflict visually accessible by using a walk-on map of Toronto. “You think these conflicts are happening in a different world, but Aleppo was a city like Toronto,” she says. “It had culture and amazing restaurants and beautiful buildings and architecture.” The piece really resonated with people, getting millions of views, and schools started showing it in classrooms to help explain the situation to kids.

“I always said to myself then, ‘Don’t ever shut the door or don’t ever say no at a time where you can help guide someone,’ because nobody was there to guide me”

Nasser’s not afraid to ask questions, but, more important, she sticks around to listen to the answers. In 2019, she did a TEDx Talk about the power of intellectual humility. “I think we have to understand each other, and asking questions is the best way to do that,” she says. “People are a great learning resource, and learning from their experiences is an amazing tool.” The problem is that sometimes when we’re asking questions, we’re not listening to the answers, she says.

In fact, Nasser asserts that many of us are simply asking questions, then we’re just getting ready to ask our next question. That’s the problem, because we’re not really thinking about how we feel when we’re asking that question, and we’re not thinking about how they feel when we’re asking a question. “I think the pandemic has also really taught us that, to be honest,” she says. “You don’t know what’s happening in someone else’s life; you don’t know all the background, all the things that are happening,” she says.

Nasser is also interested in helping kids with media literacy. “There’s so much misinformation out there,” she says. She points out that it’s a different way of consuming current events. Add to that the fact that everything is just so instant right now, that we’re not thinking critically. “They get their news from TikTok or Twitter or Instagram, and I don’t know if they’re taught the critical thinking skills that they need to navigate that,” she adds.

That’s not all. Nasser just generally likes to help others. She didn’t have a lot of mentors when she started out, and there weren’t a lot of people who looked like her, she says. “I always said to myself then, ‘Don’t ever shut the door or don’t ever say no at a time where you can help guide someone,’ because nobody was there to guide me.”

To look at Nasser’s life, one might say she is sitting on a bed of roses. But she’s had her share of deep sorrow. This year, on Twitter, she shared a heartbreaking post: “8 years ago was the lowest point in my life as I carried life & death in my body. One twin who had passed, another about to be born. Grief and depression I didn’t know existed and still work through today.”

Nasser has two words for any woman going through anything like this: “get help.” She wants women to know they are not alone. “Just go talk to somebody, go see someone. If you have to get on meds, then get on meds. I was on meds for a while,” she says. “It is a horrible, terrible, unfair journey, especially losing a child at any stage — it’s not a natural, normal thing.” Even now, she still sees a therapist regularly and she’s not afraid to admit that she still has a lot of issues to work through. “I think there’s a lot of pain there,” she adds.

Ask Nasser what she’s most proud of, and she will tell you. In two digital series, #FirstTimeIWasCalled and #LivingInColour, she explores the experiences of marginalized people pushing hard to bring uncomfortable conversations to light and to mainstream media. “The work that I’ve done recently in terms of race … I had a whole show and I still have it, called Living In Colour, based on the everyday experiences of racialized people, through their lens,” she says. “We were doing it before this reckoning that’s happened in mainstream media, and that had never been done before.” She asks simple, open-ended questions like, “What’s it like to be a Black physician in Canada?” — with complicated answers.

Nothing is off limits. “We talk about generational trauma and intersectionality, like what it’s like to be a member of the LGBTQ community and to be South Asian, too — imagine how that intersects and what family dynamics are like, and that kind of thing,” she says. “So, I just feel like it’s a proud moment, but also, it was such an education for me.” The series made for many sleepless nights for Nasser, as some people would just hate-watch, she says, and then make racist comments in the barrage of hate mail that she and her producer received. “But, we kept going, and it was such a rewarding experience,” she says. “I’m really proud of that work and I’m proud of the organization that lets me run with all this stuff.”

Life moves pretty fast in Nasser’s world. How does she manage it all? “It’s a challenge,” she laughs. She and her husband have two kids, and both parents have demanding jobs, “so there’s a lot of balance and planning.” Nasser is grateful they have help with the kids, but, she points out, kids still want their parents’ attention. And she gets that. For Nasser, family is everything, and so one thing she does is to make sure she’s available to her kids, building in blocks of time, like weekends, when she actually turns off her phone. “I try really hard to not check email, not even answering messages or text messages with friends,” she says. “I have such a finite amount of time with my kids that I need to spend as much time with them as possible. I want to, because I enjoy it and I actually really like being around them.”

Natasha Koifman: "I’m Very Specific About Who And What I Am"